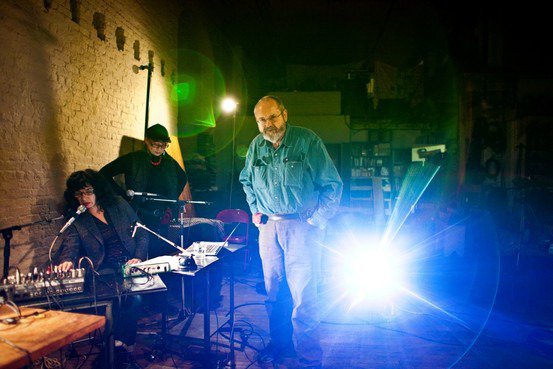 As the longest night of the year unfolds, and the journey of our planet nears the point when Winter commences in the Northern Hemisphere, join us for Phill Niblock's annual Winter Solstice concert: six sublime hours music (acoustic and electronic) and mixed media film and video in a live procession that charts the movement of our planet and the progress of ourselves through art and performance at is maximal best. Phill Niblock is an intermedia artist using music, film, photography, video, and computers. Since the mid-60s, he has been making music and intermedia performances which have been shown at numerous venues around the world: The Museum of Modern Art, The Wadsworth Atheneum, the Kitchen, the Paris Autumn Festival, Palais des Beaux Arts (Brussels), Institute of Contemporary Art (London), Akademie der Kunste (Berlin), Carpenter Center for the Visual Arts at Harvard, World Music Institute at Merkin Hall NYC. Since 1985, Niblock has been the director of the Experimental Intermedia Foundation in New York where he has been an artist and member since 1968. He is the producer of Music and Intermedia presentations at EI since 1973 (about 1000 performances to date) and the curator of EI's XI Records label. In 1993 he was part of the formation of an Experimental Intermedia organization in Gent, Belgium - EI v.z.w. Gent. Niblock's music is available on the XI, Moikai, Mode and Touch labels.