The Fabric Workshop and Museum


The Fabric Workshop and Museum

The Fabric Workshop and Museum, Philadelphia 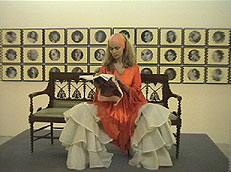 As an ever growing number of artists incorporate film and video into their practice, the moving image has become an increasingly common presence within the art gallery. Artists' films and videos have greatly influenced current discourse surrounding the moving image as they experiment with modes of filmmaking. Through this experimentation, the distinctions between narrative, avant-garde and documentary filmmaking have become blurred, as has the way viewers experience film and video. Experiments with Truth explores the relationship between these overlapping modes of cinema as filmmakers present their films in a gallery space and visual artists experiment with film traditions. Artists in Experiments with Truth include Zarina Bhimji (UK); Yervant Gianikian and Angela Ricci Lucchi (Italy); Igloolik Isuma Productions (Canada); Isaac Julien (UK); Amar Kanwar (India); Langlands and Bell (UK); Glenn Ligon (USA); Multiplicity (Multi-national Cooperative); Ulrike Ottinger (Germany); Pere Portabella (Spain); Liisa Roberts (Finland/Russia); Ezequiel Suarez (Cuba); and Francesco Vezzoli (Italy).

The FWM will enlist the conceptual and technical consultation of visionary architects Elizabeth Diller and Ricardo Scofidio, as well as Paul Kuranko, Media Arts Specialist at the Guggenheim Museum, and Lyn Rice of Open Office. These consultants will assist in designing experimental spaces between gallery and theater that balance the conceptual and practical demands of each artist's installation.

Langlands and Bell, Stills from The House of Osama bin Laden Suite: Zardad's Dog, 2003. Artists' film and video projection archived on DVD (PAL), 12 minutes, Edition of 3 and 1 Artist Proof. Courtesy of The Trustees of The Imperial War Museum, London and the artists.


Film Program
Philadelphia organizations, such as International House, Scribe Video Center, the Cinema Studies Program University of Pennsylvania, the PennDesign MFA Department of the University of Pennsylvania, and the Media Arts Department at the University of the Arts, will work with Nash to integrate the FWM's project into their programs, offering film screenings, lectures, and supplementary events. These offsite programs will provide a comparison between the audience's experience of the traditional cinematic experience and that of the gallery exhibition. Click here to view the Film Program schedule.

Catalogue
The FWM will publish a catalogue to accompany Experiments with Truth. In addition to Nash's text and essays about individual artists, the publication will include critical essays by leading voices in film and visual studies, documentation of artists' work, statements and related interviews.

While this exhibition marks a continuation of Nash's work, for the FWM it builds upon an interest in new media and the creation of recent major works that incorporate film and video through its Artist-in-Residence program. Residency projects such as Doug Aitken's Interiors, Lee Bul's Live Forever, and Bill Viola's The Veiling resulted in the creation of influential new works, expanding discourse surrounding video installation. Such experimentation with new materials and new media, and artists who are advancing this spirit of experimentation is central to how the FWM conceives its role as a collaborative-based organization.

About the curator
Mark Nash lives and works in London. The co-curator of 2002's Documenta 11, he was a Senior Lecturer in Film History and Theory at the School of Art and Theory, University of East London, London. He is currently (since 2/04) Reader in Fine Art at Central St Martins College of Art and Design, University of the Arts, London. He received his BA and MA from Cambridge University, a Postgraduate Diploma in Film Studies from the University College, London and attended Les Entrepreneurs de L'Audiovisuel EuropÃ©en (EAVE), Brussels, for a Postgraduate Diploma in Film Production. Nash has also taught at Harvard University, New York University, and the University of California, Santa Cruz. Recent curatorial work includes: The Short Century: Independence and Liberation Movements in Africa 1945-1994 (co-curator, Film, traveling exhibition); My Generation (Curator with Alexandre Pollazzon); and Force Fields: Phases of the Kinetic (co-curator, Film, Macba, Barcelona and Hayward Gallery, London). His recent publications include Art and Cinema: Some Critical Reflections, in Documenta 11 (Catalog Kantz, 2002), The Modernity of African Cinema, The Short Century (Prestel, Munich, 2001); and The Art of Movement: Force Fields, Phases of the Kinetic (Macba/Hayward, Barcelona/London, 2000).

Image: Langlands and Bell, Stills from The House of Osama bin Laden Suite: Zardad's Dog, 2003. Artists' film and video projection archived on DVD (PAL), 12 minutes, Edition of 3 and 1 Artist Proof. Courtesy of The Trustees of The Imperial War Museum, London and the artists.

Experiments with Truth catalog will be available.

stampa
permanent link
The Fabric Workshop and Museum
IN ARCHIVIO [10]