6 one-off performances. One choreographer, 6 nights, 6 events. This series will be a celebration of Cunningham's visionary collaborations with guest visual and musical artists. Each Event will contain different choreography, different decor and different musical accompaniment, all conceived specifically for the Barbican stage. 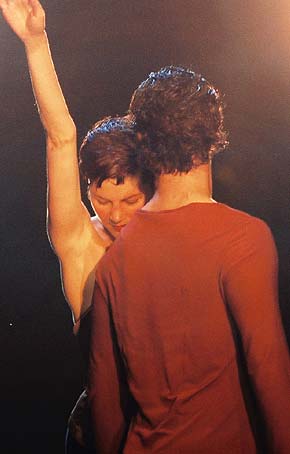 One choreographer, 6 nights, 6 EVENTs. This remarkable series will be like no other - a celebration of Cunninghama€™s visionary collaborations with guest visual and musical artists. Each EVENT will contain different choreography, different dA(c)cor and different musical accompaniment, all conceived specifically for the Barbican stage by a€˜the high priest of pure movementa€™ Daily Telegraph.

Richard Hamilton creates a new collage of projected images and texts including words by Marcel Duchamp. The other visual artists loan existing works or variations of existing works: Marc Camille Chaimowicz's piece is l'escalier a deux vitesses (2004), a sculpture of a narrow staircase; David Batchelor's piece Oh! Merce C (2005) is based on his earlier work Brick Lane Remix (2003), a light installation; Roger Hiorns' contribution consists of a cluster of 15 works (1998 - present) made from ceramic, Plexiglas, compressor and foam; Darren Almond's piece is If I Had You (2003), four different video projections played simultaneously; and Enrico David's piece is MANTWAT (2004), a giant animated puppet.

Takehisa Kosugi has been a composer / performer for Merce Cunningham Dance Company since 1977 and has been Music Director for the company since 1995, following in the footsteps of John Cage. In the 60s he founded collective improvisational group the Taj Mahal Travellers, which toured the world giving intermedia presentations in various environments including India, Europe and the Near East. He has performed in several international festivals and has presented his sound installations in many exhibitions.

Stephen Montague is a freelance Anglo/ American composer, pianist and conductor based in London. He was Artistic Advisor for the Barbican's Cage UnCaged festival in 2004 and has worked closely with composers including Morton Feldman, Christian Wolff, Conlon Nancarrow, Steve Reich, Terry Riley, Astor Piazzolla, Iannis Xenakis and John Cage.

John King, composer and guitarist, has presented his solo, chamber and group compositions throughout the US, Europe and Japan and has produced several commissions for Merce Cunningham Dance Company.

John Paul Jones was a founder member of Led Zeppelin and has worked as a producer, arranger and performer with a range of artists including Diamanda Galas, REM and Brian Eno. Not constrained by musical boundaries he took part in John Cage's MusicCircus at the Barbican and shortly after embarked on a tour with bluegrass heroes Nickel Creek. He has recently completed work on a new choral piece commissioned by COMA as part of the Brighton Festival.