A special One-Off screening curated by Caroline Corbetta. Artist's world is a grotesque combination of innocence, perversion, violence and (black) humour, moulded in plasticine and animated with the step motion technique. It is visually influenced by Western pictorial and cinematographic traditions, Eastern European animations, as well as Japanese cartoons. In this special screening 3 new videos are presented: The Swing, Because it is wonderful to live and Danse Macabre. 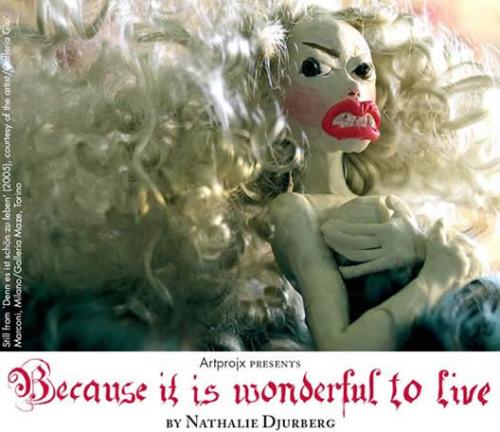 Nathalie Djurberg's world is a grotesque combination of innocence, perversion, violence and (black) humour, moulded in plasticine and animated with, the basic but laborious, step motion technique. Disturbing yet irresistible, her childlike "animated paintings" deal with harsh issues such as human beings' inclination towards evil, but also affirm life's beauty. Poised between melancholy and irony, desire and despair Djurberg's work â€“ which is visually influenced by Western pictorial and cinematographic traditions, Eastern European animations as well s Japanese and American cartoons â€“ generates a weird feeling which is heightened by the soundtrack created by the musician Hans Berg in close collaboration with the artist.

In this special screening - curated by Caroline Corbetta who came to know the work of Nathalie Djurberg while organizing the 2004 edition of Momentum, the Nordic Festival of Contemporary Art - three new videos are presented: The Swing, freely inspired by the famous Fragonard's painting; Denn es ist schÃ¶n zu leben (Because it is wonderful to live), a tale of terror set in an enchanted building and inspired by the Swedish novel JÃ¤garna pÃ¥ karinhall; Danse Macabre, a delirious musical where walking dead people are the main characters. A selection of works created in the past two years is also shown, such as Florentin, where two young and seemingly innocent girls change into sadistic executioners, Tiger licking girl's butt where the action, brought forward by the title, is many times interpolated with the obsessive writing "Why do I have the urge to do these things over and over again?", and the charming misspelled Hans looses his both arms and legs about the cruelty of war and the preciousness of life. Also on screen the more recent video animation dedicated to Badain, the black "mascot" given as a present to the queen Lovisa Ulrika in the 1700s, and Birthday party, a chronicle of a wild party also set within the realm of the eighteenth- century.

Nathalie Djurberg was born in Lysekil, Sweden, in 1978 and currently lives and works in Berlin. She graduated at MalmÃ¶ Art Academy with, amongst other professors, the artist Lars Nilsson. Djurberg has already exhibited in various museums and galleries such as Moderna Museet and FÃ¤rgfabriken, Stockholm, Galleria Gio' Marconi, Milano, Sparwasser HQ, Berlin. She also took part in group shows such as Momentum 2004, Moss, Malm1 at MalmÃ¶ Konsthall, MalmÃ¶, and "Nordic light" at Museum KÃ¼ppersmule, Duisburg.