The festival presents new work and commissions by over 140 Scottish and International artists and contributors within exhibitions, seminars, artists’talks and events, across more than 30 venues and spaces throughout the city. 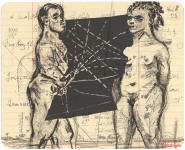 Under the curatorship of Francis McKee, GLASGOW INTERNATIONAL - Festival of Contemporary Visual Art 2006 presents new work and commissions by over 140 Scottish and International artists and contributors within exhibitions, seminars, artists’ talks and events, across more than 30 venues and spaces throughout the city.

Growing out of the existing infrastructure in the visual arts in Glasgow, the Festival both celebrates and supports the continued growth and achievements of Glasgow’s visual arts sector. The programme aims to reflect the position of Glasgow as a centre for production and exhibition of internationally significant visual art and brings to this context a range of work, much of which has either been specifically commissioned or brought to the UK for the first time for the Festival.

Festival Curator, Francis McKee said: ‘Now in its second year, the goodwill and support of the city’s art community has been sustained and it has become clear that the festival is being shaped by the city’s unique arts infrastructure - the mix of grassroots organisations, small galleries, independent artists, the larger spaces and the city’s rapidly changing urban landscape.

‘It is fitting, then, that this year’s Festival reflects the work of artists based in the city as much as it highlights international work from abroad. Many exhibitions have been specifically commissioned for Glasgow International while others highlight works that are being shown for the first time in Scotland. ‘As a curated Festival, this mixture of commissioning and selection is vital. These emerging years of Glasgow International have proven that there is a role for the Festival and as it grows, there is then a need for more time for research and for the commissioning of more ambitious exhibitions.

‘For these reasons, GLASGOW INTERNATIONAL will become a biennial event with the next Festival taking place in 2008. We are confident that extending the period of development will enable us to respond to the growth and momentum that Glasgow International is stimulating.’