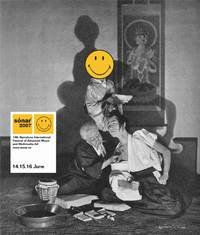 Taking this phrase as its starting point, this year SonarMatica becomes a display of installations which will immerse the visitor in an amazing show of illusionism and prestidigitation, as viewed from the possibilities of multimedia art. The search for the audience's astonishment and its immediate applause, using a strategy which dates back to circuses, magic shows and the scientific demonstrations of the late nineteenth century, is the common feature of the installations on display in the exhibition. Some of today's most highly regarded digital artists, such as Masaka Fujihata, Zachary Lieberman, Julian Maire and Takeshi Ishiguro are combining their projects to make Et Voilà! a fascinating experience.

A space for a surprising programme of tricks of magic and technology by various artists. Conjuring, exercises in mentalism and amazing occurrences in a show to suit all tastes. Shows by Mago Julián / Zachary Lieberman, Nemónico and Julien Maire. Projection of “Carlitopolis” by Luis Nieto.

Derailroaded: Inside the Mind of Wild Man Fischer (85 min)

Described as the missing link between Syd Barrett and Homer Simpson, Larry “Wild Man” Fischer is a living legend in auteur songwriting and undoubtedly one of the most eccentric voices in the American underground over the last three decades. “Derailroaded”, the documentary by the directors popularly known as The Ubin Twinz, follows in the footsteps of this cult figure – a homeless musician, psychotic singer, paranoid artist – who fascinated Frank Zappa (who he worked with on two records) and other North American pop counter-culture celebrities, including Devo member Mark Mothersbaugh, with whom he has recorded several of his now legendary albums.

Test your senses at Sonar 2007 exhibitions

Jost Muxfeldt has lived in the US as well as in Germany. He studied both music and philosophy. In 1991 he moved to Berlin, where he began working as an artist and composer, independently as well as with other artists.

”Audio Kinematics” works with the idea of kinematic relations on the level of sound: a virtual audio sculpture. It utilizes the spatial relations and proportions of a mechanical structure to determine various parameters of a sound composition, and creates a kind of virtual kinetic sound sculpture. Whether the sound is visualized or the speeding diagrams are set to sound is unimportant. It is a total art work which addresses both senses. One does not have to understand the explanations about sine waves, amplitude modulations, kinematics, or binary tree structures in order to enjoy this work.

Jost Muxfeldt, Kurt Hentschläger, Tres, Haswell & Hecker and Sonar 5.1 program head the list of an interesting selection of works that explore the relationship between sound and space.

The works presented at this year’s Sonarama, one of Sonar’s now-classic exhibition areas, focus on the relationship between sound and space. These works, presented at the Centre d'Art Santa Mònica, promise visitors extraordinary sensory experiences. Jost Muxfeldt will present "Audio Kinematics", a virtual kinematic audio-sculpture based on a sound environment produced by six speakers and abstract images projected onto a screen. In this sophisticated installation, what you hear interacts in your mind with what you see, putting you in a state of synaesthetic perception that immerses you in a world of prefabricated sounds and images. Another particularly intense experience will be offered by Kurt Hentschläger, an artist who has always been interested in the viewer’s physical and emotional reactions. “Feed”, his latest work, is a performance that uses 3D projections, artificial fog, strobe lights and a sound track full of feedback and subwoofer frequencies.

Immersed in this environment designed by Hentschläger, participants will experience an extreme sensory reality that makes them lose all spatial points of reference. The audio-activist Tres will bring Sonarama activities to a close. This artist, whose work has centred on the study of silence, will present one of his famous Blackout Concerts at the Centre d’Art Santa Mònica. In “Blackout #20”, all the devices, appliances and lights in the building will gradually be turned off, until total darkness and silence are achieved. An especially apt closing session for this year's Sonarama, which deals with the relationship between the individual-listener and his or her sound environment.

Apart from Sonarama, there will be many other parallel activities that emphasize on the relationship between sound and space. MACBA and also CosmoCaixa will host the same program of works created specifically for the 5.1 multichannel program. The use of high definition audio equipment adapted to this revolutionary system will once again guarantee surprising sensory experiences. The Haswell & Hecker concert at SonarComplex, for eight audio channels and based on the UPIC composition system designed by the electronic music pioneer Iannis Xenakis, is another highlight in the long list of activities related to sound spatialisation. A presentation at the Centre d’Art Santa Mònica by the three Sonarama guest artists and a round table at CosmoCaixa will round off the activities dealing with sound and space, one of the major themes that run through all of Sonar 2007.