The event reflects the passionate commitment of specialists in many different areas of photography: the Awards nominators, chosen from among top museum directors; the collectors injecting new life into one aspect of the discipline; the militants in Beijing standing up for a creative hub that is unique in the world; the photographers who since 1947 have opted for a now mythic independent agency. Meetings and exhibitions. 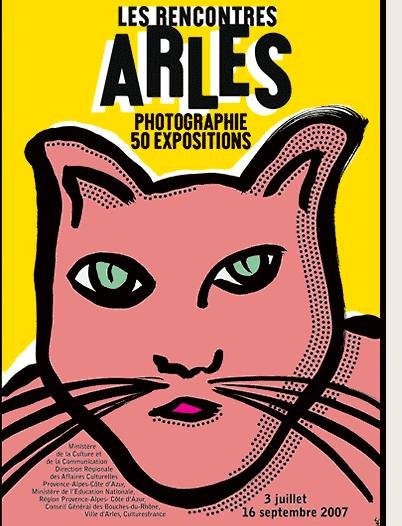 The Rencontres d'Arles 2007 reflect the passionate commitment of specialists in many different areas of photography: the Awards nominators, chosen from among top museum directors; the collectors injecting new life into one aspect of the discipline; the militants in Beijing standing up for a creative hub that is unique in the world; the photographers who since 1947 have opted for a now mythic independent agency; the altruistic patrons without whom much work would find only a limited audience; and the lovers of India who have drawn attention to its creative output. The outcome is a Festival programme bursting with discoveries and curiosities. The Rencontres d'Arles Awards Many new talents have emerged since the Awards were initiated with the Fondation Luma in 2002.

The calibre of the nominators for this year is remarkable – all are directors of internationally reputed bodies, revealing their individual sensibilities in fifteen exhibitions they and giving a helping hand to promising new artists. The photography professionals present during opening week will decide the winner of the 2007 Discovery Award. This time round each nominator will choose two books of the year, rather than one: the best thematic book or monograph on a photographer's career, and the best book to emerge from an individual creative project. Dashanzi @ Arles Often a guest at the Rencontres – 1986, 1988, 1989, 2001, 2003 – China is currently home to a phenomenon we could not ignore: the Dashanzi district. Taken by storm by artists in 2002, in five years this superb industrial and military zone has become a focal point unique in the world for artists, galleries, theatres and more. DIAF – the Dashanzi International Art Festival – is presenting a selection of works and monographs that will give an insight into the district's extraordinary effervescence.

Photographers, visual artists and performers of all kinds are offering a mix expressive of the changing China of today. This invitation to Dashanzi is a world first, hopefully to be followed in 2007 by its counterpart: Arles @ Dashanzi. The venture is also a means of providing outside help for an exciting movement now threatened with expulsion: plans are afoot to turn the site into an enormous shopping centre. India Now Now galloping ahead, India has a whole generation of photographers driven by the need to give expression to its huge, highly coded society. They have this in common with Chinese photographers, but the likeness stops there, for India never went through the shock of a cultural revolution; indeed, democracy and the independence whose 60th anniversary is celebrated this year have shaped a lasting form of social organisation. This changelessness weighs on the younger Indian generation, and in their focus on the family, love and sexuality the photographers on show in Arles seem to be voicing a conflict between attachment and the need to break free.

The passion for photography in India goes back to the Maharajahs. Distinctive features at the Rencontres are their "presentation albums" and singular painted photos; for these we are indebted to the Alkazi Foundation, which has been collecting them for thirty years. There will also be the work of a marvellous amateur photographer of the early 20th century, whose daughter is an iconic Indian painter. And lastly we are presenting a retrospective of Raghu Rai, that remarkable chronicler of the India of the last forty years. Private albums Already sparked by the selection from India, the private albums theme is taken further with the presentation of the Erik Kessels Collection from Holland. An advertising art director and exhibition curator, Erik Kessels is above all a keen collector of vernacular photography, family albums, technical images and weird material found on the Internet. At once very funny and deeply tragic, his excitingly presented collection is on show in its entirety in the Eglise des Frères Prêcheurs.

The Museon Arlaten is offering a vision of the Armenian exodus in the form of studio photographs, albums and postcards. Lastly, a veritable treasure awaits us in the Hermès notebooks of Pannonica de Koenigswarter. A famously generous patroness of jazz, this wealthy heiress also turns out to be an exceptional amateur photographer. From the end of World War II until the early 1980s she caught a host of legendary musicians in their private moments, and the result – 300 polaroids being exhibited for the first time – shows just how full-blooded a passion can be. You won't have to be a jazz buff to find this exhibition very moving.

2 Tributes Magnum Photos: 60 years young The 60th birthday of the finest of them all. Still the only independent international agency, Magnum remains unorthodox by virtue of its cooperative structure and the total autonomy of its members. The only common factor in the multiple points of view to be found there is their curiosity about the way the world works. It's a small miracle to see so many different human and photographic personalities keeping this utopian vessel afloat despite their functional diversity. We also wanted to salute some of the Rencontres' friends, beginning with the excellent Photo España festival. This year we celebrate its tenth anniversary with an exhibition of the most important Spanish photographer to have emerged from La Movida: Alberto García-Alix.

A tenth birthday, too, for the HSBC Foundation for Photography, who works as a skilled promoter of the discipline via exhibitions and books. Space does not allow me to cite all the Rencontres 2007 events, but details can be found in the programme below. Opening Week will also include a conference organised with the National School of Photography, the Centre Pompidou and Museum of Modern Art in Houston: a great chance to draw instructive conclusions from the changes in photography collection and the rules of the market. Also in Opening Week: debates on the rise of photographic sites like Flick’r and Jpeg; the Night of the Year spreading towards the Place de la République; and dozens of chances to get together with participating photographers. The workshops will be running right through the summer; the portfolio assessments, a great success in 2006, will be extended; and we know already that Back to School in Images is going to beat last year's record of 6,500 pupils and teachers. With the Festival continuing to develop, we try to give it a different feel each year, grafting new activities onto old. At the same time we're always on the qui vive, being convinced that a degree of vulnerability and a permanent calling into question of "systems that work" are the guarantee of constantly renewed public interest.

And if ever we feel tempted to believe that we've made it, each year we're pulled back to earth by a host of doubts about venues and budgets, combined with the salutary anxieties of the artists and collectors. Yet the Rencontres team displays a rare enthusiasm and professionalism; and the faithful support of our partners is invaluable. The Rencontres' public is growing exponentially and I hope that the different sensibilities at work in this year's Festival will provide all the hoped-for surprises and excitement.