On Life, Death and Return of Serkong Rinpoche

A video document about one of the Most influential teachers of Tibetan buddhism. The film is not only of high historic and philosophical value, but also, since seen through the eyes of an artist, an exiting and touching experience. 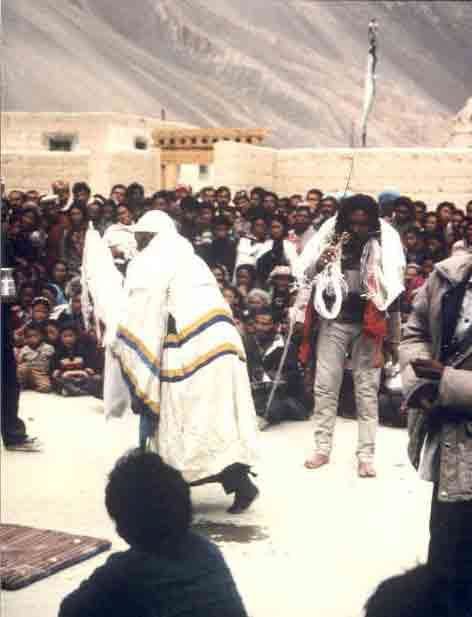 A video document by Wolf Kahlen German, 1988, 120 minutes On the 27th of August 1983 one of the Most influential teachers of Tibetan buddhism, of its iconography, of the oracles' education, of the calacakra ritual and of philosophical disputes, the Tsenshap Serkong Rinpoche, debate master of H. H. the XIV. Dalai Lama, and his lifelong close companion since Lhasa times, passed away at the village of Khibber in the secluded country of Spiti. This high plain desert country, situated in the most eastern corner of Himachal Pradesh, only a few days walk distant from Guge, Tsaparang and Tholing, if there were not the Chinese border now, is hard to get to, because it is enclosed by high mountain passes and cut off by political restrictions.

Serkong Rinpoche died practicing the tantric ritual "donglen", contracting suffering, illness, danger or death off somebody else. 1988 his rebirth had been found and in September the five year old was ordained as a monk and enthroned as a tulku in a three days long series of ceremonies. This film draws a picture of the late Serkong's life, his exttaordinary death, connected with miracles" ea the inhabitants of the 4200 hundred meter high village experienced them. lt introduces us to the young ordinary looking "good for nothing" boy, a few days before the enthronement, at his patents farm house. We accompany him through the long night of his hair cutting ceremony, the enrobing into monk's cloths and an the road to the 1000 year old monastery of Tabo, where hundreds of people and monks await him at daybreak.

It pictures the "chams" and peoples' dances and rituals, while he is patiently blessing innumerable ones, who worship his incarnated high consciousness. Finally at the third day, three oracles go into trance, one with a dagger through his cheeks, and ohe predicts Serkong Rinpoche the future. This is the only authentic documentary, of a series of humble, dignified events, (as humble as the previous Serkong, was) . The film is not only of high historic and philosophical value, but also, since seen through the eyes of an artist, an exiting and touching experience.