For its third edition the festival has adopted the general theme and leitmotif of Forms of Engagement, examining the role and influence of art, artists and artistic practice on the wider cultural, social and political sphere on both a local and a global level. This focus on the various ways in which art engages with society is all the more pertinent in the year of the 40th anniversary of the momentous events of 1968, which had a significant impact not only on society and politics in Czechoslovakia, but throughout the world. 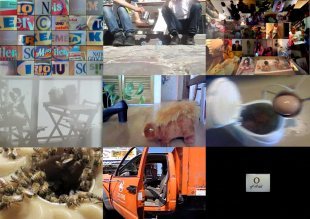 Galerie Vernon
Presents
TINA B. – The Prague Contemporary Art Festival 2008
The Main Event: September 25 – October 15
Special Events Week: October 9 - 13
Under the patronage and with the support of the Ministry of Culture of the Czech Republic and the City of Prague

The third edition of TINA B. – The Prague Contemporary Art Festival, organised by Prague’s Galerie Vernon, aims yet again to combine the creative energy of the cultural scene in Central and Eastern Europe with emerging talents and trends from around the world in the Czech Republic’s vibrant capital. Adopting the leitmotif FORMS OF ENGAGEMENT, TINA B. 2008 will focus on the relationships between art and society, exploring the role of contemporary art, artists and artistic practice as socio-cultural agents that not only provide a critique of social order, but also serve a direct, positive and symbiotic social function on both a local and global level.

The third edition’s focus on the ways in which art engages with individuals and society is all the more pertinent in the year of the 40th anniversary of the momentous events of 1968, which had a major impact on society and politics throughout the globe, as well as on Czechoslovakia in particular. TINA B. 2008 feels honoured to be able to make at least a small contribution to the commemoration of an anniversary that is a strong symbol of liberty and free thinking (as well, unfortunately, of the ill-fated imposition of political and military might).

The Main Event of TINA B. 2008 will take place from September 25 until October 15, 2008, at various locations in Prague, including the Laterna Magika Theatre, the Italian Cultural Institute, Dùm U Kamenného zvonu, Dukelských hrdinù 28 and the Critics’ Gallery, taking contemporary art beyond the confines of the dedicated exhibition space and onto the interface with public space. In terms of art forms and genres, the festival is focusing on video, light and sound installations, projections, screenings and interventions, as well as on visual performance art and the new media generated by mobile technologies, which are so profoundly influencing the course of our lives. Another approach highlighted at this festival is open collaboration, such as the participatory project RE-BRANDING PRAGUE by Wooloo Productions.

Special Events Week will run from October 9 until 13 and will include visual art performances by extravagant Italian performers Coniglio Viola, Berlin-based art project Stupid Green and Czech multimedia artist Darina Alster. Renowned Russian Viktor Misiano and artists Yevgeniy Fiks and Ilya Budratskis are preparing a thought-provoking re-enactment of events linked to the Extraordinary Congress of the Communist Party held in Prague’s ÈKD factory one day after the invasion of the Warsaw Pact armies on August 21, 1968. The performance will involve local artists, intellectuals and the general public. Czech socially and politically engaged art group Guma Guar is preparing a provocative public space intervention that will examine social and political issues on a local and global level. In addition, video art screenings will be held in public space exteriors and one of Prague’s alternative cinemas, as will artist and curator talks and discussions, with a particular emphasis on the theme of engaged art, art activism and the 1968 anniversary.

VIDEOCRACY
Curator Micaela Giovannotti will transform the architecturally rich space of the Italian Cultural Institute located in Prague’s Malá Strana into a vibrant contemporary art location with her section entitled VIDEOCRACY, addressing the democratic approach that video art bears with the use of video installations, as well as revitalizing tangible architectural elements of the institute with site-specific installations employing the ephemeral elements of light, sound and motion.

Among the many other artists involved, including Tamy Ben-Tor (Israel, lives in NYC), Regina Jose Galindo (Guatemala), Ragnar Kjartansson (Island) and Sigalit Landau (Israel), Danish art project Wooloo Productions (Sixten Kai Nielsen & Martin Rosengaard) will present a video documentation of their previous actions carried out for the Defending Denmark project, as well as an exploration of the artist as political agent though their tactical media performance RE-BRANDING PRAGUE. In this performance, taking place at the Italian Cultural Institute during the Special Events Week, the artists will present critical strategies of real and utopian means of re-thinking national identity.

DARKNESS IS NOON
This section curated by Rosanna Musumeci brings together artists mostly from Italy whose works are concerned with one of the essential elements of both art and life – light. “Light is the medium to see - to conceive - the form of any object. Objects, however, are perceived by subjects and that makes the whole difference,” writes the curator. The section includes sound and video projections, as well as digital, video and mixed media installations exploring artistic and scientific, objective and subjective, methods, approaches and strategies tackling the ways in which light enables us to see and alters our perceptions.

ALTERNATIVE REVOLUTIONS
With her section Alternative Revolutions focusing on video art, curator Blanca de la Torre García encompasses a series of works that could be seen as a subversion of the classical concept or behaviour of Revolution.

Taking Marshall Berman’s ideas about understanding modern society in an open way (All That Is Solid Melts Into Air: The Experience of Modernity, 1982), de la Torre applies its core ideas to the concept of revolution, understanding it in a more expansive way. Therefore, we can see all sorts of political, intellectual, social and quotidian revolutions as part of one dialectical process, and to develop creative interplay among them, enlarging our vision of our own experience and giving our daily lives a new resonance and depth.

1968 REENACTMENT
A special project curated by Viktor Misiano involving New York-based artist Yevgeniy Fiks and Moscow based political activist and artist Ilya Budraitskis will consist of a staged performance or “re-enactment” of events related to the socialist reforms in Czechoslovakia in 1968, as well as the subsequent invasion of the country by Warsaw Pact armies, as experienced by workers in one of Prague’s ÈKD factory, which was the site of the free Extraordinary Congress of the Communist Party held just one day after the invasion of Czechoslovakia by the Warsaw Pact armies. Focusing on the social and micro-political dimension of the idea of “socialism with a human face” and on workers’ capacity of self-organisation, this visual art performance will consist of the reading of a script based on authentic historical materials and extensive on-site research including interviews with intellectually and workers conducted by the artists and curator in Prague. Audio-visual material gathered and recorded in Prague will also be used during the performance.

Importantly, the project is open to the participation of local artists and intellectuals, as well as the general public. The re-enactment itself, taking place on the premises of the ÈKD Eletrotechnika factory, will also be documented on video and later broadcast in one of the festival locations, as well as being available on the festival website. A film will subsequently be made combining footage of the re-enactment with audiovisual archives and various artistic interventions.

TEMPORARY BOUNDARIES
Temporary Boundaries, curated by Marek Tomin and the collective Greyzone, will create a temporary art centre in a dilapidated building in Prague 7. The building has a unique location – directly opposite Veletržní Palace, which houses the Czech National Gallery’s Collection of Modern and Contemporary Art. The art centre will include the ground floor of the building, which in times past held an apothecary, as well as twelve broken-down garages located in its extensive courtyard. The building’s facade will also be utilised as a space for art, creating a direct communicative interface not only with public space on one of the main transport arteries in Prague 7, but also with the art institution opposite.

On the boundary between private and public space, this temporary art centre will provide a unique setting for the exploration of the different ways in which artists engage with their work, its setting and context, the public domain and society at large, as well as giving new life to an urban structure before it returns to its original functionality – the building is soon to be reconstructed. The section combines video, digital and sound installations with site-specific wall paintings, sculptures and spatial interventions by both domestic and international artists. Artists presenting video and digital installations include Erik Olofsen, Jakub Nepraš, Lukáš Machalický, Jakub Roztoèil, Richard Wiesner and Linda Èihaøová. Site-specific interventions and wall paintings will be produced by, among others, Guma Guar, Vladimír Skrepl, Mario Chromý and Jan Kaláb. Section guests include David Ter-Oganyan and Nikolay Oleynikov, who will take part in TINA B. 2008 on the invitation of renowned Russian curator Viktor Misiano.

A graduate of the Prague Academy of Fine Arts, Jan Kaláb is also closely involved with the Czech street art scene. The third edition of TINA B. views street art, whose authors mostly shun financial gain, as a form of engaged art in public space. Over the last few years there has been an unprecedented proliferation of street art in Prague, including stencil graffiti, sticker art, street poster art, mosaic tiling, installations and sculptures, as well as the more traditional forms of free-hand aerosol sprayed graffiti artwork.

TINA B. ON THE ROAD
This section curated by TINA B. brings together a host of artists from various parts of the world. During her travels around the world, attending various exhibitions and art fairs, TINA B. has come across many interesting artists and their artworks. She has selected some of them and invited them to take part in her very own section. Not being partial to any particular medium, TINA B. has assembled a thought-provoking ensemble of artists whose works broadly correspond with this year’s leitmotif – FORMS OF ENGAGEMENT.

SPECIAL PROJECTS
As in previous years, TINA B. 2008 will present a number of Special Projects at various exterior and interior locations in Prague. One such project, curated by Micaela Giovannotti, will be a site-specific installation employing light and sound by Stefano Cagol (IT) that promises to transform one of Prague’s landmarks into a beacon of contemporary art. Other special projects will include an installation by Daniel Gonzalez, a public space site-specific video installation by Giuliana Cuneaz, and a mixed-media installation by PP SEMP.

EMERGING WOR(L)DS will culminate during the Main Event of TINA B. 2008 with an exhibition of scaled-down versions of all of the artworks displayed on billboards in Prague during the project with accompanying photographic documentation in the CRITICS’ GALLERY in Prague’s Adria Palace. A comprehensive publication featuring all the billboard artworks exhibited in Prague will be available to accompany the project.