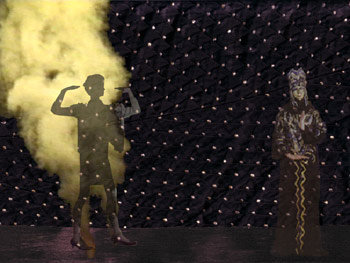 These events are part of UBS Openings: Saturday Live, a series of bi-monthly performance events at Tate Modern.

UBS Openings: Saturday Live
Bonnie Camplin and Paulina Olowska: Usher We (Down There)

Usher We (Down There) is a new collaboration between artists Bonnie Camplin and Paulina Olowska, taking place in the previously inaccessible oil tanks of the former power station. Buried to the south of the building, these dramatic spaces are at the heart of plans to transform Tate Modern for 2012. The performance takes place every hour from 10.00-18.00 and takes the form of a guided tour, led by the artists, in which the participants become intricately involved in the strange ritual and drama of this format. Drawing attention to light and sound and through a range of materials and artworks installed in the oil tanks the artists will explore themes of decay and the moment.

THIS EVENT IS SOLD OUT

This event is part of the Cultural Olympiad/Out of Bounds programme, and Open Rehearsal

Set in the fantasy world of Las Vegas, with its slot machines, dancing girls and strip lights, this live work stages the adventures of the seventeenth-century Dutch philosopher Baruch Spinoza, radically displaced into a contemporary cyber world.

Tate Modern is delighted to premiere Spinoza in Las Vegas, a new theatre piece and a talk titled Modes of Thought, by American artist Sturtevant - best known for provocatively re-making works by artists such as Andy Warhol and Marcel Duchamp.

The Scavenger's Daughters is an ambiguous portrait of two sisters. This epic text weaves together three monologues, constantly failing to form a narrative dialogue. The title refers to the act of scavenging of words, ideas, food and emotions. The sisters speak in a way that imitates the workings of the brain in daydreams so thoughts follow in quick succession. The viewer is taken along an almost hypnotising stream of thoughts which are exteriorised and released into the air.

Image: Bonnie Camplin and Paulina Olowska, A (Like Akarova), 2006. Copyright the artists.