Six Tuesdays After Film as a Critical Practice

A series of talks curated by Ian White. Artist Cerith Wyn Evans makes a special live event and the series begins with writer and academic Tom Holert's presentation of his recent video Ricostruzione. 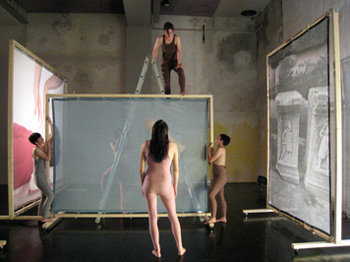 In November 2007 the Office for Contemporary Art Norway held a three-day seminar in Oslo that brought together artists, critics and theorists to articulate or respond to the ways in which we might understand film to be a critical practice. It was accompanied by a film programme curated by Ian White.

Six Tuesdays After Film as a Critical Practice is a series of 'talks' that further explores the same proposition from international and intergenerational perspectives and extends the idea of 'critical practice' to incorporate the structure of the event itself.

It includes a continued enquiry into the work of three artists whose films and videos were also shown in Oslo: Emily Wardill interviews Peter Gidal and Emily Roysdon presents a specially conceived performative work.

Rosa Barba's two-projector scultpure/sound work Western Round Table 2027 is shown alongside a selection of original recordings from the 1949 Western Round Table on Modern Art featuring contributions from Marcel Duchamp, Frank Lloyd Wright and Arnold Schoenburg.

There is an interactive presentation of the German television programme Reformzirkus (1970) in which the celebrated German filmmaker, writer and thinker Alexander Kluge intervenes to expose not only the construction of the programme itself but also cultural and social prejudice and radical, revolutionary ideas about the function of the medium that assault the established order.

Artist Cerith Wyn Evans makes a special live event and the series begins with writer and academic Tom Holert's presentation of his recent video Ricostruzione: Dissertori/Libera (Towards a Historical Fable about Modernist Architecture and Psychology) (2007, co-authored with Claudia Honecke, commissioned by Manifesta 7). He discusses the relation between the critical practices of writing and art making, or working as a critic and as an artist making critical video, the coexistence and the navigation of these things.

For more information on all the events see http://www.lux28.org.uk
All events start at 7pm and are held at LUX 28, 28 Shacklewell Lane, Dalston, London E8 2EZ
Admission Free, booking essential as places are limited, to book please email salon@lux.org.uk

LUX 28 is a temporary LUX exhibition space presenting a year-long investigation into how artists' films and videos are made, discussed and collected.