The Influencers is a cult festival exploring unconventional weapons of mass communication. Over the past 6 years it has been defined as a gallery of unclassifiable projects, an investigation on guerrilla communication, a demonstration of present-day science fiction, a talk show you won't see on TV. 3 intense days event spent interweaving tales of subversion, manipulation and the transformation of live elements of contemporary culture. 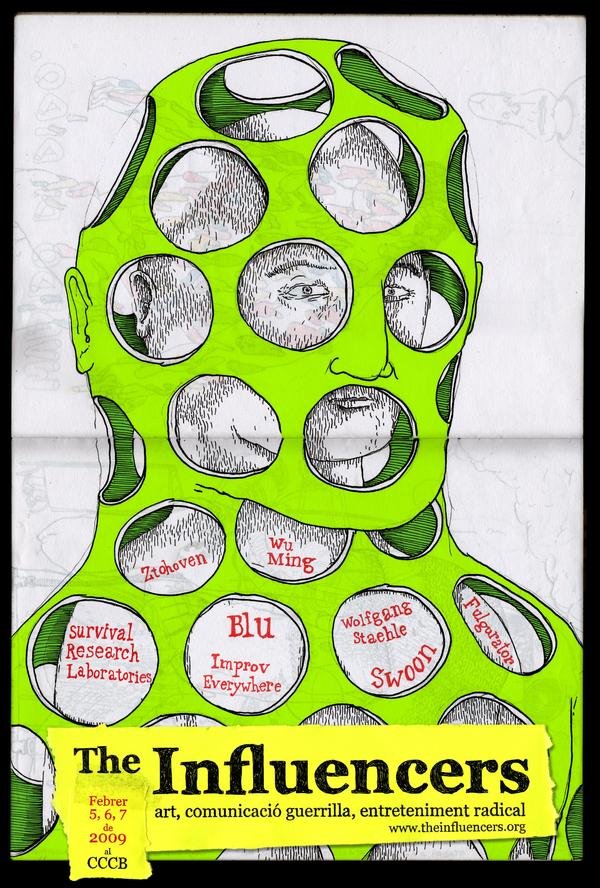 Welcome to the fifth chapter of the Influencers project, a festival dedicated to exploring unconventional weapons of mass communication. Over the past few years Influencers has been defined as a gallery of unclassifiable projects, an investigation on guerrilla communication, a demonstration of present-day science fiction and even a talk show that can't be seen on TV, but in the end, Influencers is simply a laboratory of ideas, a think-tank which for three intense days tries to interweave tales of subversion, manipulation and the transformation of live elements from contemporary culture.

Based on actual events
The principal characters of Influencers are the 8 invited projects, examples of direct interventions in the heart of the global jungle, down amongst the soldiers of consumer culture, low-cost information, the latest trends and technology fetishism. A territory where, despite everything, frontiers are fluid and continuously crossed and are difficult to control due to gusts of alternative ideas. The voracity of commercial culture and the infiltrating capacity of alternative culture provoke mutations in both, at times as fast and dazzling as lightening, at others with a capacity to slowly erode common expectations. The invited projects in The Influencers are examples of these highly potential mutations, brought about with visionary spirit, intelligence and relatively limited budgets.

Story searchers
Over the past five years The Influencers has interwoven very diverse practices and this time will be no exception: graffiti, semi-digital or analogical technology, literature, public performance, anti-propaganda, memetics and myth-making. We do not break frontiers between disciplines for the pleasure of it, but that nowadays this is simply inevitable. We are attracted to the uncontrolled mix between alternative and mass cultures and look for practical ideas, stories and anecdotes that express a new point of view and of course, the last we are interested in is that these are all expressed in the same language. However, what they do have in common which marks them apart is their taste for risk, the impulse that moves the authors of these projects to build dangerous machines, act politically incorrectly, use anachronous technology or simply to defy common sense.

The fifth chapter in the series: technological and post-digital
In this fifth chapter, Influencers appears to set aside some key elements from the first editions, such as the explicit subversion of mass cultural messages and the manipulation of the latest digital technologies. This year will see projects that use an important degree of analogical technology: from the reckless creations of SRL to the rafts of Swoon's Swimming Cities, as well as the large analogical screen walls by Blu, the television intrusions by Ztohoven and even collective, radical narratives by Wu Ming. Projects which while nourished by the digital sensitivity of their time look to analogical strategies to bring the enormous potential of digital technology outside of the screens.

Language, channels, public
The reuse and subversion of the powerful resources of mass culture have always been key elements in all kinds of independent culture. Many of the invited projects to Influencers 2009 use the space and even some of the formulas of mass culture to provoke surprise, reactivate drowsy attention and ultimately entertain. However, they look to the interior of mainstream culture in a more subtle way, passing through its frontier territories searching for new channels, languages and means to draw in a new public or community.

The enormous symbolic success of Improv Everywhere's flash mobs, the recognition of SRL as a classical exponent of industrial culture (when in another age they would have been deemed as merely underground), the hundreds of thousands of copies sold of Wu Ming novels or even the more than 5 million views of a video by Blu, shows there are different ways of capturing attention or involving people than the purely commercial. In these experiments of radical entertainment we are probably seeing the seeds of a new popular culture begin to grow.