The first event of new visual and sound art performances held on and around Chung King Road in Chinatown. Featuring approximately 20 performances, this will be Chinatown's first collaborative performance event hosted by the resident galleries. Programming includes a schedule of live performances and parallel exhibitions, and open to the public with an expected attendance of over 500 guests. 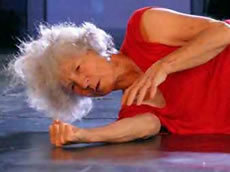 The entire program of performances will provide the audience with an exciting interactive exploration of the world-renowned Chinatown, Los Angeles community of galleries. For one evening, the gallery spaces and surrounding outdoor areas will present various performances engaging viewers from a broad range of interests, breaking down barriers with a variety of performative materials from new visual art, dance, film, theatre, and music, including new commissions and historic reconstructions using historic Chinatown neighborhood as the backdrop for work by approximately 15 artists at 8 different venues.

Programming will include a schedule of live performances and parallel exhibitions that will provide critical and historical contexts for the new work produced. The 15 plus events will be free and open to the public with an expected attendance of over 500 guests.