An international festival of live art presenting site-specific works. It promotes artists works challenging their forms and concepts in different kinds of spaces creating a dialogue between work and space where both are questioned and reconstructed. 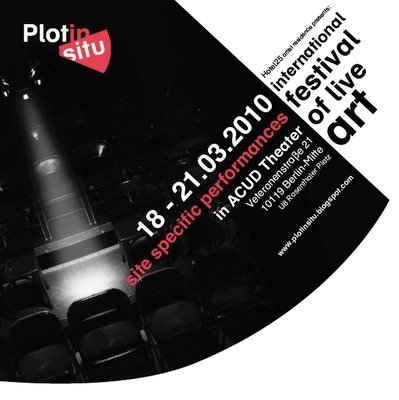 Organized by Hotel 25 with the collaboration of ACUD Theater, PLOT in Situ is an international festival of live art presenting site-specific works. We promote artists works challenging their forms and concepts in different kinds of spaces creating a dialogue between work and space where both are questioned and reconstructed. For the First edition of PLOT in Situ 2010 we choose the Theater Space as first approach to be worked by artists.

We choose artists working in different kinds of fields, inside the live art forms. Visual artists, theater directors, actors, performance artists were invited to produce a work inside of a theater. The term site-specific starts when artists took the sculpture out of the gallery to the public space. Their aim was to provoke the public space. At the same time that they were re-constructing the space and the quotidian of the people that were passing by, they were re-thinking as well the institutionalization of the art structures.

When we use the term site-specific, has an important structure for the festival, is not just to describe a work that is being construct in a certain space. Our aim is to create the possibility of affecting the space Theater, to challenge artists to re-create the notions of this same space, by working in it, using their own practices, taking advantage of is historical, formal, contextual, geographical or symbolic characteristics.

We feel that this will be a very interesting point of view for several questions such as what is site-specific and how do you define this term in the several existing forms of art? What is the difference between performance art and theater performance when both have Theater as space to think and work? How can an actor re-think the Theater, is history, is form and context inside a site-specific approach? How can a performance artist work in a Theater without doing theater?

This year the artists will be confronted with a Theater, a “place for viewing” an empty space made by the history of acting, with a particular context. Each year we will propose a different space, a different context challenging the forms and concept of the term site-specific. For this first time, PLOT in situ will work with artists from Greece, Japan, China, Canada, Germany, Israel, Spain and Portugal. This multicultural view of live art is one of the important values of this festival. Each cultural background, each work field and each point of view of these artists will bring several different definitions and forms of the space “Theatre”.