A selection of organic, blind, sculptural, and audiovisual drawings. Questioning concepts of time, chance, and authorship, the work of Becheri is marked by an experimental vision of drawing and a strong sense of aestheticism. In a great variety of media, and privileging black and white, the artist acts both as a systematic demiurge and a voyeur of art in progress, staging performances for himself. 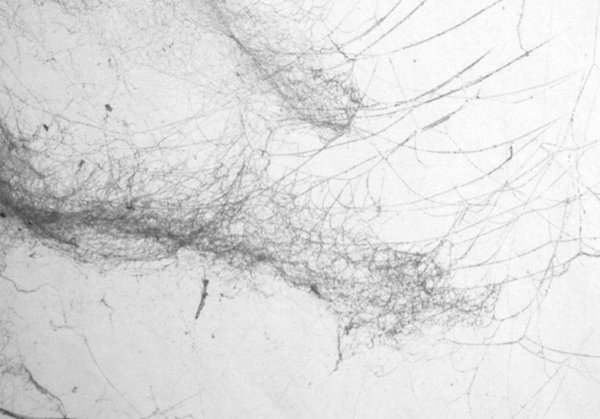 I consider as original elements of drawing: contrast between black and white, darkness and light, line, and absence. These elements are the pillars of my work. – Emanuele Becheri

Questioning concepts of time, chance, and authorship, the work of Emanuele Becheri is marked by an experimental vision of drawing and a strong sense of uncluttered aestheticism. An art which does not grow vertically but horizontally, where artworks constitute a temporal digression from a timeless project, Becheri’s “impressions” manifest themselves in several modalities – all of them verging on the betrayal of the creative persona. In a great variety of media, and privileging black and white, the artist acts both as a systematic demiurge and a voyeur of art in progress, staging performances for himself.

Born in 1973, Emanuele Becheri lives and works in Prato, Italy. He does not hesitate to enlist animals, darkness, gravity or amateurs into strengthening his creative discomfort. Pliny the Elder credits a Corinthian girl with the invention of drawing. She allegedly traced the contours of her lover’s shadow on a wall, creating a “sign”, or referent, for his features. Exploiting the mental space opened up by this legend, the artist creates material epiphanies, using experiments to question or reinvent the idea of drawing.

Characteristic of this approach, the Impressioni (2010) have an organic, almost vegetal appearance, achieving the “photographic memory of a sculptural moment”. Here, spider webs are stuck to a bi- dimensional support through a blind gesture: Becheri pressing a large piece of white adhesive paper onto a given wall area, achieving an effect as if the webs had printed/impressed themselves upon a “skin”.

The series Shining (2007) also relies on animal participation. It consists of large black sheets of paper crossed by snails’ engraved luminous paths. Once again, the draughtsman contented himself with setting up the experiment and waiting until snails escape the paper limits, their trails “speaking” for them.

Still showing traces of organic forms, the Carte quadrate (2006) have however the appearance of more traditional drawings, black on white. Made with both hands in utter darkness, in this instance vision and technical skills are denied the artist. As in Carte piegate and Carte copiative, Emanuele Becheri uses “improper” materials (a pinhead and copy paper) to impel himself into a creative crisis and suggest clumsiness and inexperience.

Locked in a solid frame, unfolding progressively under the force of gravity, the Rilasci (2006-2007) are crumpled, large-format pieces of white paper. These works evolve continuously, unfolding very slowly until – potentially – reverting to their original aspect, like modern vanities. The sounds produced by this unfolding have been recorded and are presented as Release (2007), an audio drawing.

For Oggetti combusti (2008-2010), Emanuele Becheri asked author- executors to pick up an object and combust it under smoldering ashes. The results are tri-dimensional “shadows” of the objects, turned black and extremely fragile, but conserving their shapes. An archetypal symbol of drawing, Untitled (Matita) (2008), on display here, is the first of these combusted objects, realized by the artist himself.