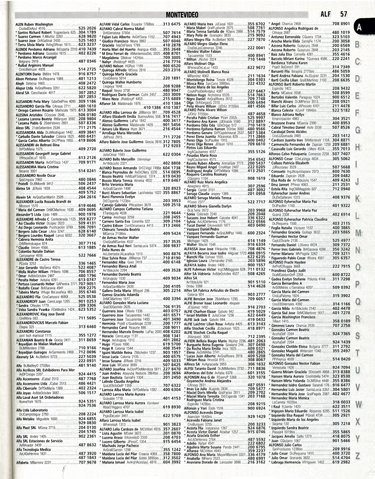 Alexander Gray Associates is pleased to present Memorial, the second solo exhibition with the renowned conceptual artist, Luis Camnitzer. A leading figure in the realm of Latin American conceptualism and political art, Camnitzer is currently the subject of a major retrospective at the Daros-Latinamerica Collection, Zurich, which will travel to El Museo del Barrio, New York in 2011.

Camnitzer's exhibition at Alexander Gray Associates consists of a large-scale new work, Memorial. In this 195-part artwork, Camnitzer replicates the Montevideo telephone directory, in which he has meticulously inserted the names of the Disappeared in Uruguay. During the military dictatorship that ruled the country between 1973 and 1985, nearly 300 Uruguayans were victims of forced disappearances. Working with lists of names culled from public resources, Camnitzer used digital techniques to create space in the ready-made phonebook and added lines of type, resulting in the reappearance of hundreds of names that are now indistinguishable from the names in the original phonebook. In this way, Camnitzer renders useless the very action of list-making and counting–political or otherwise. At the same time, the work levels roles of target and perpetrator, victim and survivor, prisoner and liberated.

Camnitzer has addressed the Uruguayan dictatorship in many previous artworks, including his seminal print portfolio, Uruguayan Torture Series (1983), which was a centerpiece of Documenta 11 (2002). Memorial will be presented in Fall 2010 at the Museum Wiesbaden, organized by Volker Rattemeyer.

Luis Camnitzerʼs work has appeared in numerous exhibitions since the early 1960s, including individual shows at Pensar Latinoamérica desde la Colección MUSAC, Museo de Arte Contemporáneo, León, Spain; The Kitchen and El Museo del Barrio, New York; List Visual Arts Center at M.I.T., Cambridge; Museo de Arte Contemporáneo, San José, Costa Rica; and Museo Carillo Gil, Mexico City. Retrospectives of his work have been presented at Lehman College Art Gallery in the Bronx (1991) and Kustshalle Kiel (2003). His work has appeared in biennials and group shows, including Information (1970), The Museum of Modern Art, New York; Biennial of Havana (1984, 1986,1991 and 2009); Whitney Biennial (2000), Documenta 11 (2002), and Beyond Geometry (2005), Los Angeles County Museum of Art. Camnitzerʼs work is in the permanent collections of The Museum of Modern Art, The Metropolitan Museum of Art, and the Whitney Museum of American Art, New York; The Museum of Fine Arts, Houston; The Tate Modern, London; the Daros-Latinamerica Collection, Zurich; and Museo de Arte Latinoamericano de Buenos Aires (MALBA), among other institutions. Camnitzer received Guggenheim Fellowships in 1961 and 1982. A highly regarded critic and curator, Camnitzer is a frequent contributor to ArtNexus, and is the author of On Art, Artists, Latin America, and Other Utopias (2009), New Art of Cuba (1994, 2003) and Conceptualism in Latin American Art: Didactics of Liberation (2007).