The monumental cycle of Romanesque sculptures in the cloister at Santo Domingo de Silos has long attracted visitors, including generations of artists. When Tacita Dean made her first visit there, many features in this historic complex engaged her attention, not least the Gregorian service of Vespers with which the monks end the day. Some months later, she returned in order to study more closely doodles and graffiti on and around the cloister's colonnade, marks that she imagined might have been made over the centuries by the abbey's inhabitants as they whiled away their hours in lonely seclusion. 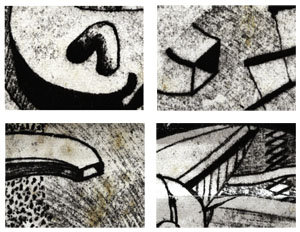 “It is as if my frame of mind is analogue when I draw: my unconscious reverie made manifest as an impression on a surface” Tacita Dean

The monumental cycle of Romanesque sculptures in the cloister at Santo Domingo de Silos has long attracted visitors, including generations of artists. When Tacita Dean made her first visit there, many features in this historic complex engaged her attention, not least the Gregorian service of Vespers with which the monks end the day. Some months later, she returned in order to study more closely doodles and graffiti on and around the cloister’s colonnade, marks that she imagined might have been made over the centuries by the abbey’s inhabitants as they whiled away their hours in lonely seclusion.

As often in Dean’s practice, an image or chance encounter becomes a mnemonic palimpsest. Resonating in her imagination, it sets off a train of allusions that prompts recent as well as more distant memories. Perhaps the most far-reaching of the many references generated by Silo’s cloister was of an elaborate black and white doodle drawn decades earlier when Dean, a schoolgirl, attended weekly Mass with its maker: a young friar studying theology at the nearby university. Tellingly, if perhaps unaccountably, she had kept his drawing safely lodged inside a book as if she intended to do something with it, one day…. Among more recent memories was one involving a sheet of paper covered with intertwined pencil marks. As Giorgio Morandi obsessively arranged bottles and vessels on the worktable in his studio in order to compose his still life paintings, he kept track of their shifting placement by the simple device of tracing their footprints. With its mysterious tracery of intersecting lines, neither random nor strictly ordered, this much used under-sheet became the subject of a film Dean made in 2009 titled “Still Life”.

Yet another of her works, “Lord Byron Died” (2003), also came to mind during that second research trip to Silos. Comprised of a suite of six black and white photographs, it is based on photographs Dean made of ancient signatures she discovered, by chance, while searching for Byron’s autograph in the ruins of the Temple of Poseidon at Sounion in 1989. Although she set all this material aside for almost fifteen years, the seeds of what has proven an abiding interest in graphic traces - doodles, graffiti and the like - took root during that year in Greece on an exchange fellowship. (Prior to graduating from Falmouth School of Art in 1988 she had written her thesis on the work of Cy Twombly, a premonition of - or precondition for? - these nascent interests.)

Miguel Sobrino, an historian long interested in Spanish medieval architecture, contends that the heterogeneous engravings Dean shot at Silos have diverse origins. Some are mason’s marks, records of work done by individual craftsmen on the basis of which payment for their services was calculated. Others, which look like rudimentary game boards, were probably inscribed by the stone cutters as they amused themselves while waiting for the moment when their newly carved columns, still lying on the ground, would be inserted into the building’s fabric. Yet others, which may be rough sketches of ornamental schemes for the cloister, attest to the ready availability of stone as a convenient surface in an era when supplies of paper were scarce and expensive. By contrast, others which incorporate text and, even, signatures may have been made centuries later, possibly during a period when the monastery’s buildings, no longer occupied by the clergy, provided temporary winter quarters for the local farmers’ animals or storage for their crops.

Although at Silos such activities seem to have been comparatively rare, monks certainly made graffiti and doodles, as Dean had speculated. The canons at Pamplona, for example, were (famously) chastised for indulging in aimless activity (rather than for defacing the surfaces of an architectural masterpiece). Damage and defilement were hardly an issue at Silos, however, Sobrino contends, for this tapestry of ancient incisions, limned when the building was under construction, would have disappeared beneath the layers of lime and bright pigment that were routinely applied to all the carved surfaces.

No longer clandestine, this record of serendipitous impulses evokes lives lived in seclusion according to rigid temporal intervals, freighted with frequent periods of isolation. Patinaed by a combination of aging and natural cycles, the marks have acquired stories of their own, part of a vernacular history that, often unnoticed, evolves in tandem with the more official versions charted by landmark artefacts and architecture.

In “The Friar’s Doodle” (2010), Dean has used a rostrum camera so that the film is comprised of pans, as opposed to the static shots which were formerly a hallmark of her work. Cut on the movement, this material has been edited to follow closely the drawing’s intricate meandering profiles. At no point does the camera pull back to reveal the elaborate composition in its totality. Seen cumulatively, as it were – in fragments, over time - the surrealistic composition can be known fully only in the mind’s eye. Dean’s refractory manner of revealing the original image serves, metaphorically, to underline the protracted processes of discovery required to decipher the bigger picture inscribed in Silos’s fabric. For the carved and etched subjects in the photographic inventory which Dean shot during her second visit to Silos offer a sometimes indecipherable, often fractured record that undermines any presumption that history might be singular, solid and sealed. This archive becomes a visual analogue of day dreams, musings and flights of fantasy that, while fixed in the past, is nonetheless familiar and accessible: kin to our own everyday, speculative forays that drift outside time, with no discernible endings. While “The Friar’s Doodle” similarly attests to the persistence of intuitive impulses that drive us to position ourselves within the lexical discourses of history, it also invites reflection on the interpretative mechanisms we deploy to decode their graphic residues.