Hello My Name Is..., an exhibition that introduces a group of emerging international artists through their self-portraits. The 11 young artists in the exhibition have not previously shown work at the museum. Though sometimes relied upon to provide visual information about an artist's physical appearance, self-portraits yield insights into the artist's character and the society in which he or she lives. 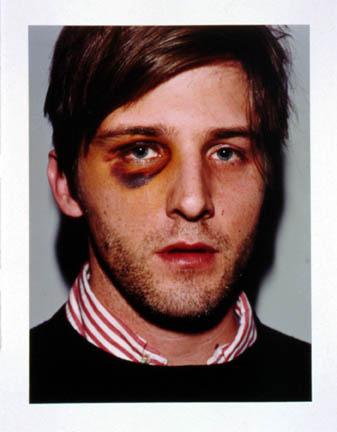 Introduces young artists through self-portraits at Carnegie Museum of Art

Hello My Name Is..., an exhibition that introduces a group of emerging international artists through their self-portraits, will be on view June 29 through September 29, 2002 in Carnegie Museum of Art's Forum Gallery. The 11 young artists in the exhibition have not previously shown work at the museum.

Though sometimes relied upon to provide visual information about an artist's physical appearance, self-portraits yield insights into the artist's character and the society in which he or she lives. The self-portraits in Hello, My Name Is..., which features recent works of photography, sculpture, drawing, and video, are no exception.

My Potential Future Based on Present Circumstances (1999), a drawing by Beth Campbell (b. 1971), deliberately avoids depicting the artist's physical appearance. Instead, it charts a web of possible events in Campbell's life, which she recorded in her handwriting. Like the diagram of a family tree, the work begins with a single event and flows into an increasingly complex network of potential outcomes that evolve from admixtures of choice and chance. The resulting map of Campbell's inner makeup is a keen, sometimes whimsical, portrait of the artist's yearnings and fears.

Korean-born artist Nikki S. Lee (b. 1970) presents photographs of herself that have been called "trans-lifestyle art." To create these unique self-portraits, Lee poses as a member of cultures not her own, and an assistant or a willing bystander takes a series of photographs. In The Hispanic Project (1998) and The Seniors Project (1999), Lee has gently insinuated herself into a group of seniors and a Hispanic community by imitating behaviors, adopting aspects of physical appearance, and living for days, or even weeks, at a time within these assumed cultures. The works capture dimensions of Lee's appearance and character, nurtured and revealed through her chameleon-like temporary affiliations, while recording fascinating social details.

Painter Zak Smith (b. 1976) has created a number of intricate portraits of himself and his circle of friends that detail pop culture and the lifestyles of the young. Smith's Self-Portrait for the Cover of a Magazine (2001), which bears all the earmarks of the artist's fascination with contemporary subcultures, is perhaps one of the more conventional portraits in the exhibition. The work, painstakingly executed in acrylic and ink, depicts Smith in sneakers, jeans, t-shirt, tattoo, and a Mohawk haircut, sprawled insouciantly on the floor behind an upturned skateboard.

Spermini (1997) by the oldest artist in the exhibition, Maurizio Cattelan (b. 1960), offers a wry, multi-layered commentary on self-portraiture. The work is made up of 150 cast and painted rubber masks-each a likeness of the Italian artist and varying slightly from the next. Not only does Spermini invite one to evaluate what a portrait, like a mask, hides and reveals, the work can also be viewed as a statement about cloning and genetic engineering.

This exhibition marks another introduction-the first collaboration between Laura Hoptman, curator, and Elizabeth Thomas, assistant curator, of Carnegie Museum of Art's department of contemporary art. "Hello, My Name Is... reasserts the potential of contemporary self-portraiture and extends a visual handshake from these artists to our community," Hoptman explained. "We wanted this collaboration to feature some of the most exciting young artists from the U.S. and Europe."

Support
Major support for the exhibition program at Carnegie Museum of Art is provided by The Heinz Endowments and the Pennsylvania Council on the Arts.