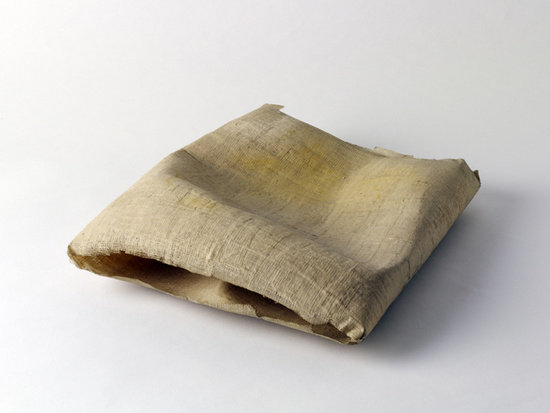 In 1969, one year before her death at the age of 34, German-born American artist Eva Hesse wrote of her desire "to get to non-art, non-connotive, non-anthropomorphic, non-geometric, non-nothing; everything... It's not the new, it is what is yet not known, thought, seen, touched; but really what is not and that is." In her effort to make works that could transcend literal associations, Hesse cultivated mistakes and surprise, precariousness and enigma. The objects she produced, at once humble and enormously charismatic, came to play a central role in the transformation of contemporary art practice.

On March 16, Hauser & Wirth New York will open an exhibition of such objects: 'EVA HESSE' brings together fourteen works, many never before shown publicly in the United States, that previously have been considered improvisational 'test pieces' or prototypes for larger sculptures. Of these, eleven are delicate papier caché forms – wisps of assembled paper, tape, cheesecloth and adhesive made between 1966 and 1969 – that are neither round nor rectangular, but indeterminate. Intimate manifestations of the artist's thought process, they evoke the bodily, suggesting fragments of skull, sheaths of timeworn parchment, tablets awaiting manuscript, curving shadows, the lens of an eyeball. These objects evade easy definition: They have been seen variously as experiments, little pieces, molds, tests for larger works, or finished works in their own right. In her recent research on Hesse's work, prominent British art historian Briony Fer has renamed these objects collectively as 'studioworks,' proposing that their precarious nature places them at the very heart of Hesse's influential practice and raises important questions about traditional notions of what constitutes sculpture.

'EVA HESSE' will present its contents upon a plinth that loosely alludes to how these works may have been encountered in Hesse's studio, temporarily arranged in groups on the artist's work table, always subject to change. The objects in this exhibition will be included in the museum survey 'Eva Hesse: Studioworks' at Fundació Antoni Tapies in Barcelona (May 14 – August 1, 2010), the Art Gallery of Ontario in Toronto (September 10, 2010 – January 2, 2011), and the Berkeley Art Museum in California (January 26 – April 24, 2011).

In New York in the 1960s, Hesse was among a group of artists, including Robert Morris, Bruce Nauman, Richard Serra and Robert Smithson, who engaged materials that were originally soft and flexible: aluminum, latex rubber, plastic, lead, polythene, copper, felt, chicken-wire, dirt, sawdust, paper pulp and glue. Often unstable, these elements yielded works forever alive in their relativity and mutability. Hesse was aware she produced objects that were ephemeral, but this problem was of less concern to her than the desire to exploit materials with a temporal dimension. Much of the tumescent, life-affirming power of Hesse's art derives from this confident embrace of moment. As she stated in an interview with Cindy Nemser in 1970, "Life doesn't last; art doesn't last."

Biography has figured prominently in criticism and scholarship about Hesse's work since her death from brain cancer in 1970. Born in Hamburg in 1936, she and her older sister Helen were sent to Holland on a children's train at the end of 1938. Their parents fled Nazi Germany two months later, and the family came to New York, where Hesse was raised in the German Jewish community of Washington Heights. She wanted to be an artist from an early age and studied at Pratt Institute of Design, the Cooper Union, and the Yale School of Art and
Architecture. After completing her studies in 1959, Hesse returned to New York and pursued her art for just over a decade.