The Cemetery of Reason is conceived as a mid-career retrospective of the American artist Ed Templeton. The exhibition tells the story of a pro skateboarder, a photographer, a drawer, a painter, etc. 'Electrified 02 - Hacking Public Space' focuses on artists whose field of action is the 'public space'. Unbounded and virtually unregulated, they hack into the town with unannounced interventions. Traces of this seep into the museum, where new and existing works are brought face to face with flashbacks from the seventies and nineties. 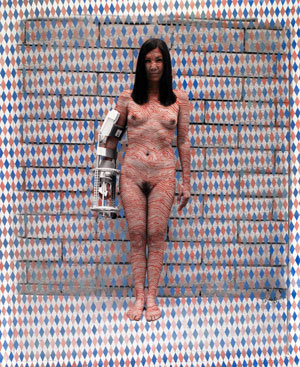 Ed Templeton
The Cemetery of Reason

The Cemetery of Reason is conceived as a mid-career retrospective of the American artist Ed Templeton. The S.M.A.K. will be assembling into dazzling clusters of images the photos, paintings and sculptures he has done over the last fifteen years.
The exhibition tells the story of a pro skateboarder, a photographer, a drawer, a painter, etc. A story which, although it focuses on his own life and those of the people around him, transcends the autobiographical and exposes social and societal phenomena unhesitatingly but without pointing a finger.

Ed Templeton’s (b. 1972) work cannot easily be categorised. He was brought up in Orange County, a suburb of Los Angeles, and spent his youth in a world of skateboarding and punk music. While still very young he became a professional skateboarder and at the age of 21 set up his Toy Machine, a Bloodsucking Skateboard Company, for which he did all the artwork. From an early age he was passionate about drawing and painting, and was enormously stimulated by the work of Egon Schiele, Lucas Cranach, Balthus and David Hockney. Photography has also always been a constant interest. In the beginning he used his analogue camera as a recorder to capture inspiring images. In the mid-nineties he also started using it as a medium in its own right and since then his photos have been an integral part of his work. In the same way as he was never able to choose between skateboarding and being an artist – they fuel each other – nor has he ever been able to limit himself to one particular medium. Photos, paintings and sculptures complement each other, and are of equal worth, without hierarchy. Templeton often describes his drawings, photos and paintings by means of anecdotes, feelings and ideas that give a new, more profound interpretation to the images. When assembled in an exhibition, these images are deployed as parts of a broader story, but without losing their artistic independence.

Templeton mainly documents his own life and that of the people around him. He does portraits of himself and his wife Deanna, friends, family and the many people he meets on his skateboard tours. The photos he takes do not focus on skating itself, but on all the associated activities. The boys and girls who hang around near a skate park, the boredom of touring, the bloody falls, the late-night parties and the intimate encounters with his wife in anonymous hotel rooms. His career as a pro skateboarder means he spends a lot of time with youngsters who are at an uncertain phase of discovery in their lives. With dreams, hope, worries, the formation of identity and the presentation of the self to the fore. Templeton is ‘one of them’, a pro skate legend and an ‘example’. This gives him the opportunity to come very close to the world they live in and to record it. He depicts their sexuality, fears, aggression, joy and problems but does not judge them. Although his photo installations and paintings are often highly autobiographical, Templeton at no time tries to deal with his own difficult youth. On the contrary, he wants to create openness and offer insights and opportunities to those who want to grasp them.

The Cemetery of Reason takes the form of a whirlwind of photos, sculptures, drawings and paintings. In some cases, images are clustered by subject and reveal certain phenomena or events, but not in an imperative manner.

The S.M.A.K. and the Vooruit Arts Centre are joining forces to overrun the town. "Electrified 02 – Hacking Public Space" focuses on artists whose field of action is the ‘public space’. Unbounded and virtually unregulated, they hack into the town with unannounced interventions. Traces of this seep into the museum, where new and existing works are brought face to face with flashbacks from the seventies and nineties.

Electrified is the name under which the S.M.A.K. and the Vooruit mount this biennial project. This second edition is taking up a decisive position on the crossroads of several directions in the visual arts. At the same time it will expose the friction between the areas where the two institutions operate: the S.M.A.K. in contemporary art and the Vooruit in media art, sound and performance art. In the quest for a shared ‘mentality’ in these different dynamics, the public space is taken as a common thread. In this case, the term ‘public space’ is all-embracing, without losing sight of the actual distinction between real and virtual public space.

In addition to probing the boundaries between the different fields of art and the way artists currently enter the public space, Electrified 02 - Hacking Public Space is also a study of changing trends that have kept the notion of ‘public space’ in vogue for the last thirty years. In this sense, the project presents itself as a complementary triptych: sixteen artists, who operate internationally, with extremely varied backgrounds, will be showing new and existing work in the museum. More than half of them will also be undertaking actions in the town. These actions will be documented and gradually inserted into the exhibition. The furniture-maker, lock specialist and artist Lucas Murgida probes the boundaries between public and private space. In concrete terms, he examines the way we rigidly mark off our private territory and the key role that… keys play in this. Using his self-designed ‘Image Fulgurator’, Julius von Bismarck smuggles symbols into other people’s snapshots – visual material which we are usually certain is unique, private and self-determined. Ivan Moudov sells an ordinary conjuring trick to passers-by for extortionate sums in the hope of introducing a parallel black economy into the urban fabric.

There is a supplementary Flashback section in which a framework for the project is provided by significant points in the quite recent history of ‘hacking public space’. This will involve the digital display of the work of about thirty artists who can count pioneering actions in the public space among their achievements. Artists like Wolf Vostell, Nam June Paik, The Yesmen, Christophe Bruno... played a crucial role within this history and will be shown in the exhibition.

Electrified 02 – Hacking Public Space: practical details
Both the Flashback section and the urban interventions are presented in visual form in the S.M.A.K. and the Vooruit. The exhibition itself is in the museum. A Salon evening is also planned in the Vooruit, with talks by Alessandro Ludovico and others. He is the publisher of Neural, magazine for hacktivism and also guest curator of the historical section.

S.M.A.K.
Citadelpark – 9000 Gent
Closed on Monday
Tuesday through Sunday from 10 am to 6 pm
Entrance fees
€ 6: individual visitor
€ 4: groups from 15 persons, under-25s, over-60s, students
€ 1: young people under the age of 26
Free: for children up to and included the age of 18, disabled and persons accompanying groups.
Admission to the museum is free for citizens of the city of Ghent every Sunday morning from 10 am to 1 pm.