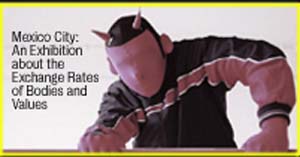 P.S.1 Contemporary Art Center presents Mexico City: An Exhibition about the Exchange Rates of Bodies and Values, a thematic exhibition of international contemporary art emerging from Mexico City. Living in a cramped space where Beverly Hills and Calcutta meet everyday, the artists in this exhibition explore the tension between wealth and poverty, between progress, stagnation and improvisation, and between the violence and civility that animates this vibrant city. Compounding the complexity of urban living, high rates of kidnapping, murder, and pollution become a daily threat. For the rich, the body becomes an object to be cared for, protected, even exchanged for ransom, while, for an underclass of day laborers, homeless people, and prostitutes, survival depends on participation in physically exploitative situations that place an exact commercial value on the body.

Yoshua OkÃ³n's video Chocorrol (1997) records two dogs, a male Xoloitzcuintli and a female French poodle, mating as a symbol of the mixing of two cultures, as one breed violates the purity of the other. Gustavo Artigas' The Rules of the Game (2000) presents a video of a sporting event, staged by the artist, in which two Mexican soccer teams and two American basketball teams play simultaneously on the same court. Prepared for the risk of injuries to the players, the artists was surprised when both matches went without any major disruptions, which suggested the viability of a healthy co-existence of Mexicans and Americans along their shared border. For No one over 21 (2000), Jonathan HernÃ¡ndez collaborated with the popular Tijuana-based musicians and the design group Torolab to create a music video depicting San Diego teenagers crossing the Tijuana border for a night of drinking and carousing. Based on his experiences abroad, Carlos Amorales examines identity, role-play, and spectacle through an extended investigation into the realm of popular Mexican wrestling.

Daniela Rossell's series of photographs, Ricas y Famosas (1994-2002) capture the endangered species of the rich and famous in their ornate and overprotective environments, where the sexuality of these stereotypically spoiled blondes is reduced to nothing but an expensive commodity, or worse, to a cheap decoration. In Francis AlÃ¿s' series of photographs Ambulantes (Pushing and Pulling) (1998-2002), the artist captures people pushing and pulling their wares to and from the marketplace, leveraging their body weight against the commercial value they are physically dragging along.

Works by Ivan Edeza, Teresa Margolles, and Santiago Sierra explore how ritualized discrimination and exploitation has rendered invisible the physical and psychological acts of violence against the lives and deaths of the underclass. In Vaporization (2002), Margolles fills the gallery with a foggy mist created from the disinfected water used to wash corpses in the city morgue. Her performance visualizes the physical memory of a last washing, while also suggesting angelic disappearance or bodies fading away. Sierra's new work at P.S.1 concentrates of the current power structures of the evolving global economy and focuses on the plight of the exploited laborers by demonstrating the oppressive monotony of their daily routines. In De Negocios y Placer (2000), Edeza presents found footage from a "violence compilation tape" purchased on the black market depicting men hunting and shooting Brazilian tribe members.

Cristina Faesler and JerÃ³nimo Hagerman present abcdf, a book and CD-ROM that offers a vivid and multi-layered impression of the metropolis through two thousand color images and forty-five texts.

A catalogue published by P.S.1 will accompany Mexico City, containing essays by Biesenbach, CuauhtÃ©moc Medina, Guillermo Santamarina, and Patricia MartÃ­n, and color images of works. The exhibition will tour to Kunst-Werke Berlin and the Museo de Arte Carrillo Gil, Mexico. Dates to be announced.

Opening: June 30 - September, 2002 The founding definition of modernist painting was uttered by Maurice Denis in his famous comment of 1890: "It must be recalled that a picture - before it is a picture of a battle-horse, nude woman, or some anecdote - is essentially a plane surface covered by colors arranged in a certain order." As modernism engaged in its ceaseless self-definition, the picture plane became, at modernism's end, a sensitive surface that could not be violated, "modernism's hymen" as one critic called it. The literal surface defined by Denis had become its own metaphor, a metaphor that enacted what some were pleased to see as painting's death throes.

Painting's demise, like that of the Broadway theatre, has been periodically announced. With post-modernism, some considered painting to be an exalted form of letter-writing, personal "expressions" irrelevant to the broader issues - economic, gender, class, etc. - that projected the practice of art into wider social contexts. It might be said, with some exaggeration, that painting sometimes seemed to be confined to an intensive care unit. But nothing is more invigorating for an artform (or religion) than to be declared dead. The picture plane, the indispensable fact, the basic essential, even essence, every painter must ambiguously negotiate, and sanctioned by several hundred years of tradition, is extraordinarily durable. From the point of view of the picture plane, the act of painting, no matter how revolutionary, is a conservative act and what is conserved is the tradition of painting itself. That painting presently attracts numerous young artists is further evidence that continuity - a grand continuity - exists.

To illustrate some of these matters, this exhibition presents the work of four painters whose practice implicitly defines their attitudes to painting's "ground." While a vast expository exhibition could be assembled to investigate this subject, this exhibition limits itself to defining four different attitudes, each of which stands for a quota of modernist/post-modernist time.

Part of the fascination of William Scharf's work is that it shows us something we had speculated about but not seen - the apotheosis of the symbolist/surreal beginnings of some abstract expressionist paintings by an artist of rare power and dark imagination. Scharf's picture plane is classic modernist, his space conceived as a fluid potency in which he enacts dense narratives the meaning of which center around generative beginnings - the creative act pondering the act of creation. However complex, the formal vocabulary is the classic push and pull of color on a flat surface. The "the integrity of the picture plane" applies here. The picture plane is as much at work as it is in the paintings of Odilon Redon, to which Scharf's art has a remote cousinship.

With Al Held's immense project we are engaged in a grand reversal of one of late modernism's proscriptions: flatness. Greenberg's theory that a medium ultimately reduces itself to reveal its basic framework or fabric was partly instrumental in excluding any reference to illusionism. To this, minimal sculpture, excluded from painting's "dream-world," was a response. Held's reaction was to embrace illusion and its Renaissance handmaiden, perspective. His panoramas tunnel and excavate vistas like, according to one critic, "abstract John Martins." Held's rejection of modernist space in favor of a relentless illusionism necessarily defines his picture plane as post-modernist, as indeed is his subject. In terms of the theme of this exhibition, he is a transitional figure through which a change in the conception of the picture plane is enacted.

No more confident reinterpretation of the picture plane could be imagined than that of Fabian Marcaccio in his "Untitled." Recognizing the generative energies embodied in the traditional surface, Marcaccio does not hesitate to tear it away from the wall, even literally to tear it if need be. Curving across the corner, laden with paint and plastic, imprinted with photo transfers, no matter how extreme Marcaccio's handling may be, it is still the picture plane that energizes his post-modernist conception of it. Where Held moves illusionism inward, Marcaccio builds outward with literal collage, encrustations and paint, occasionally trapping pockets of illusion. While Marcaccio's canvasses may stretch, sag, undulate and/or fold, they owe their vitality to the artists' implicit acknowledgment of the picture plane described by Maurice Denis one hundred and twelve years ago.

Changes in the way the picture plane is interpreted tend to recondition it for re-use. The picture plane as interpreted by Kristin Baker is a thin, swift tissue consonant with her subject - the racing car and track. The "integrity of the picture plane" is intact in these paintings, which, aware of their modernist pedigree, discourse expertly between flatness and intimations of depth. From her post-modernist place in time, Baker, a recent Yale graduate, makes a connection to a previous tradition which several young painters now feel free to exercise without guilt. The durability of the picture plane as a locus of creative energy is again certified by a member of a new generation.

To speak of the picture plane now is not without controversy. Since it is a prime formal entity it is construed by many as part of an aesthetic system largely consigned to the post-modernist waste-basket. Enough time has gone by, however, that the vicissitudes and transformations of this indispensable essential of painting - its surface - may be redefined through four examples that interpret it differently. These interpretations differ as profoundly as the subject matter of the four artists. However the picture plane may be conceived - a literal fact, a metaphor, a surface to be inscribed - Robert Motherwell acknowledged its dangerous potency years ago when he said, "I hope I can make something as beautiful as the empty canvas."

William E. Massie of New York has been selected as the winner of the Third Annual MoMA/P.S.1 Young Architects Program, a competition that invites emerging architects to build projects at P.S.1. The objective of the Young Architects Program is to identify and provide an outlet for emerging young talent in architecture, an ongoing mission of both MoMA and P.S.1. The contestants were instructed to make the best use of P.S.1's outdoor courtyard and available materials within the allotted project budget, which is $50,000. Massie will realize his proposal for the project Playa Urbana/Urban Beach, which incorporates wading pools and shade elements in a refuge from the urban summer. As in past years, the project will become the centerpiece of Warm Up, P.S.1's popular music series held annually in the courtyard. Massie's project is expected to be complete by late-June.

Terence Riley, Chief Curator, Department of Architecture and Design, The Museum of Modern Art, comments, "Bill Massie demonstrates that real innovations in architectural design derive from the fusion of theory and practice. Massie does as much critical thinking on the job site as in the studio."

Playa Urbana/Urban Beach addresses concepts of surface and sensuality, redefining shade, privacy, and space to create a new landscape within P.S.1's existing large courtyard. The central element of the project is a group of three shallow reflecting and wading pools made of foam covered by plastic with a phosphorescent sheen. Although the effect is not visible during the day, at night this material appears to glow. When unoccupied, the surface of the still water reflects the light and color of the sky, uniting the natural and urban landscapes. Walls made of evenly spaced PVC tubing undulate throughout the courtyard in shapes that echo waves, providing shade. In the smaller courtyard is an enclosure in which visitors can shower.