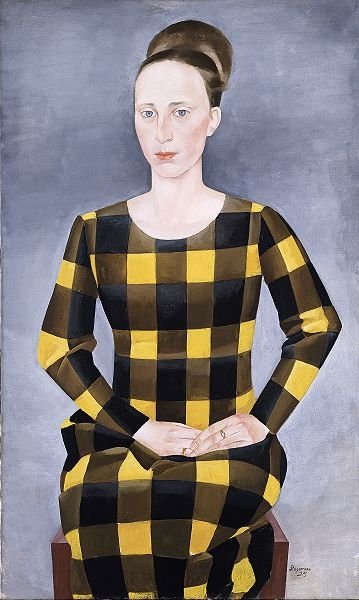 cureted by Dr. Ulrich Luckhardt and Friederike Weimar M. A.

As part of the festival “Himmel auf Zeit” – die 20er Jahre in Hamburg (“A Temporary Heaven” – the 1920s in Hamburg), the Hamburger Kunsthalle is highlighting the diversity of the city’s art scene in the period after the First World War. In the years between the foundation of the Weimar Republic and the establishment of the Nazi dictatorship, Hamburg’s avant-garde art scene was dominated by four different movements: one was a style strongly oriented towards contemporary French painting, while another reflected emerging expressionist tendencies; this in turn gave way to Magic Realism and – from the second half of the 1920s onwards – there was also a distinct move from objective depiction towards abstract pictorial forms.

Hamburg artists like Friedrich Ahlers-Hestermann, Alma del Banco and Gretchen Wohlwill, as well as the now lesser-known painters Fritz Friedrichs and Walther Tanck, took their inspiration from their French counterparts. Many went to work and study in Paris after acquiring the fundamental artistic skills at home. While they were particularly fascinated by Paul Cézanne’s use of brushstrokes to break down the subject matter and create an interwoven perspective, the influence of Renoir, Matisse and Cubist methods can also be discerned in their art. The “cultivated balance” (Gustav Pauli) of their works brought these artists widespread recognition from 1919 until they were condemned by the Nazis.

By contrast, the development of expressionist tendencies among the Hamburg avant-garde lasted only a few years. It emerged in reaction to the trauma of the First World War and was reflected in the art of Emil Maetzel and his wife Dorothea Maetzel-Johannsen, the canvases of the painter and interior designer Otto Fischer-Trachau and the works of the painter and sculptor Heinrich Steinhagen, as well as in the many woodcut prints created by Hamburg’s avant-garde and published in expressionist magazines such as “DIE ROTE ERDE”. Thanks to the efforts of patrons and collectors such as Gustav Schiefler and Rosa Schapire, artists in Hamburg became familiar with and were particularly influenced by the art of the Dresden-based “Brücke” group.

The emergence of Neue Sachlichkeit (New Objectivity) in Hamburg formed a curious contrast to the rest of the country: whereas in other cities this movement flourished in the period up to around 1925/26, here there was no charismatic figure to lead the movement or steer it in a particular direction. Anita Rée, Heinrich Stegemann, Otto Rodewald and the Altona-based artist Edgar Ende worked quite indepen-dently of one another, although their pictorial creations all point in the direction of Magic Realism – an apolitical, highly symbolic variant of New Objectivity that was often characterised by irrational elements.

Nor was there a great deal of collaboration between those artists in Hamburg who moved into abstraction. Among others, Richard Haizmann, Alfred Ehrhardt and Willi Nass developed individual ways of distancing themselves from the object – by embracing spiritual and philosophical notions, for example, or drawing inspiration from music. On the other hand, the close collaboration of artists in the “Hamburg Secession” resulted in the development of the so-called “Secession style”. This was also a positive side effect of working together in a studio complex that had been placed at the artists’ disposal in the wake of the world economic crisis.

The exhibition presents paintings and a selection of sculptures that also reveal the relationship between art and architecture in the 1920s, as well as works on paper.

Instead of an exhibition catalogue, a festival publication has been compiled which – like the festival itself – follows a cross-genre approach, whereby the featured artworks are placed in the context of other forms of cultural expression in Hamburg at that time. The publication and the exhibition also draw attention to a number of artists from Hamburg who may not be very well known today, but were among the leading figures of German art in the 1920s.