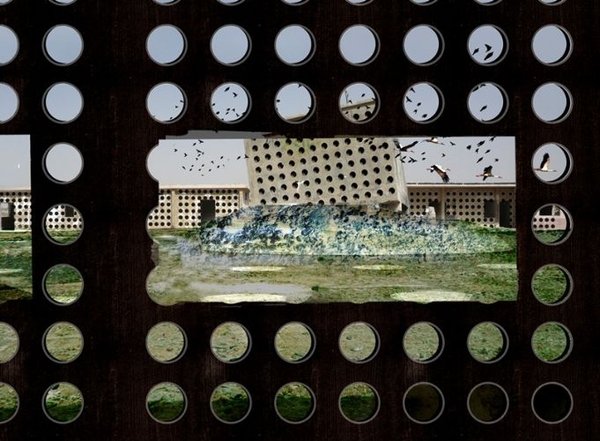 Critical projects and positions by architects, urbanists, artists and activists

"Refuge" can imply a safe haven, or the notion of forced displacement, producing spaces that can range from luxurious resorts to overcrowded refugee camps. Spaces of refuge are generated by the desire or necessity to withdraw from the city, to keep out intruders, or to protect and control those inside. In our societies, protective isolation is as necessary as openness, yet when refuge dominates, urbanity is at risk. Focusing on cities in Turkey and the Middle East, this exhibition approaches spaces of refuge from opposing angles: as threats to urbanity that need to be prevented or dismantled, and as intimate, but still undeveloped forms of the Open City.

A series of works in which the Dutch artist Bas Princen observes contemporary urban transformation in Turkey and the Middle East: how Istanbul, Beirut, Amman, Cairo and Dubai have become laboratories for a proliferation of spaces and practices of refuge - spaces of extreme poverty on the one hand and wealth on the other. Motivations and triggers for processes of withdrawal are extremely varied producing a broad array of conditions ranging from migrant worker camps to gated satellite cities in the desert, from slick city centre high rises to islands of urban poverty. Rather than investigating the social, economic or political dynamics that have produced the space, Princen considers the conditions that have emerged with an interest in their spatial and formal qualities. Despite the extreme differences in the dynamics of spatial production, the emerging spatial units are surprisingly similar-at the very least, in their isolated nature and alienated relation to their surroundings.

The IABR is an international urban research biennale founded in 2001 with the conviction that architecture is a public concern. The theme of the fourth edition of the IABR is the Open City, which signifies openness to diversity and difference, vitality and social sustainability, where people can productively relate to each other, both culturally as well as socio-economically. With the "Open City: Designing Coexistence" heading, the Rotterdam Biennale places special emphasis on how can architects and urban planners make concrete contributions for sustainability of the urban condition. The exhibition brings together elements from Rotterdam's recent 4th International Architecture Biennale and, at the same time, functions as a platform for a series of lectures, presentations and discussions.