Antigravity - figures of levitation and vertigo

The group-exhibition concentrates through works of artists on the topic of weightlessness in art. The focal point is not to be laid on the utopia of aviation that is ostensibly connected to this term, the exhibition rather refers to an intersection of scientific, aesthetic and poetic dimensions, which are reflected in the art of experimenting with perception, motion, and imagination. Curated by Birgit Kulmer. 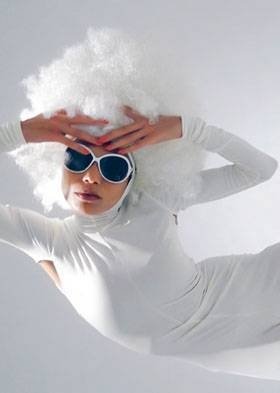 "I refer to those who find wisdom in a falling leave, outsized problems in ascending wads of smoke (...) and motionlessness in the most intense agitation" Honoré de Balzac

The focal point is not to be laid on the utopia of aviation that is ostensibly connected to this term, the exhibition rather refers to an intersection of scientific, aesthetic and poetic dimensions, which are reflected in the art of experimenting with perception, motion, and imagination. Unlike aviation levitation is also a state of peace, one could also say motionlessness, which is just characterized by the absence of a flap or any other effort. This state of motionlessness, however, underlies, according to Honoré de Balzac, the most intense motion. It is an inner oscillating tension that, if maintained, would also lead into vertigo and the loss of orientation.

The focal point in this exhibition is the conceptualisation of the absence of gravity as a theme which is in its utopian lineaments predestined to direct art to its limits; a limit that art shares on the one hand with science or alchemy and on the other hand with poetry- a poetry of emptiness. The objects obtain in this absence of gravity a quiet and sometimes solitary independent existence. The exhibition's artists broach the issue of this independent existence in a profound, ironic and self-reflecting way. In doing so the emphasis also lies on a fractional and temporary abolishment of physical ness is it that of the artwork per se or that of the medium or that of the object, which is discussed therein. The vertigo that precedes the fall or follows the downfall will be considered in the exhibition as well as the vertigo that underlies most of the absence of gravity's demonstrations.

Just as Anna and Bernhard Blume take to breakneck positions within their staged photography like in their photo series „Im Wald', lashed in the branches in order to create the appearance of levitation through irony, whereas in Pieter Laurens Mol's work the minimal gesture of a tilting of photography suffices to evoke the impression of a levitation. Generally photography seems to be a preferred medium for the depiction of levitation besides drawing, „as both are ideal media due to their immateriality to illustrate the motion of thinking.' (Peter Weibel) The large sized scan of Edgar Leciejewski shows a white pigeon wing that seems to be paralyzed in an agravic state – between ascension and fall. Only a closer look reveals that the levitation of Edgar Leciejewski's bird creatures is actually a recumbency and that the bodies don't move because of their own impulse any more but are inanimately exposed to our gaze. The exhibition's title is taken from Heinrich von Kleist's essay „Über das Marionettentheater'.

Antigravity describes herein the unbowed advantage that the puppets would have compared to animate actors, as they would easily succeed the overcoming of gravity and the abolishment of inertness of matter. The marionette refers to a possible fusion of sculpture, painting and theatre. In its abstraction and its obviously synthetic appearance as a creature between man and machine it becomes – fragmented and heterogeneous- a theatrical body par excellence that doesn't represent a however natured „inner reality' any more.

The thematically arrangement of weightlessness, physical ness, stage and marionette forms the base for the installation of Susanne M. Winterling and Ruth May. The marionette's body also fascinated Oskar Schlemmer. During his considerations Oskar Schlemmer noticed a conflict between the natural human body and the abstract room. He tried to abolish this by committing the dance to the same mathematical laws that underlies room. But so much the dance was conventionalized and human body was segmented and geometricalized through costumes he wasn't able to cross certain natural borders. The complete deliverance of the body- or rather its final abstraction- can therefore only happen through an artificial character that corresponds to the mathematical laws of room. Thus Susanne M. Winterling relegates in her photography's after Schlemmer single animated elements from Schlemmer's preparatory drawings to a triadic ballet in an abstract image of single forms that glide freely in an empty, black room.

Lilibeth Cuenca Rasmussen's video work „The present doesn't exist in my mind...the future is already far behind...' emanates from the futurist Valentine de Saint- Point who wrote the Futuristic Manifest of Lust. In her video work she shows the female body attempting to fight against the „laws' of gravity, which are represented in geometrical structures, architectures and rhythms. In her own poem „surfing the surface' which is the last chapter of the performance Lilibeth Cuenca Rasmussen deals with the possibility of self- empowerment in the disembodied space of a digital culture.