Live & Die Like a Lion? This show features 50 oil stick and ink and vellum drawings made between 1999 and 2004. It also includes Golub's only existent unfinished painting - a chalk sketch of two lions- which he started in 2001 but never completed, as well as preliminary 'background' drawings and the artist's original source material from a variety of wide-circulating periodicals. Contemporary "Dorothea Tanning: Early Designs for the Stage" presents approximately 20 hand-drawn ballet costume. 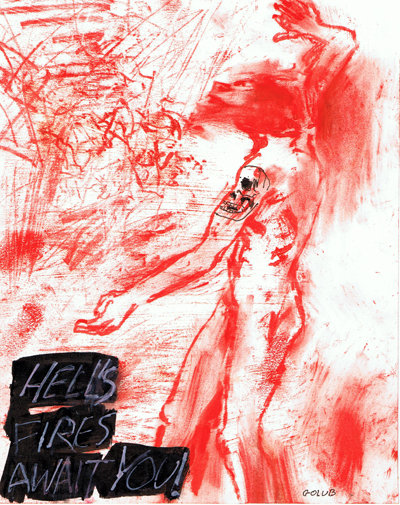 The Drawing Center announces Leon Golub: Live & Die Like a Lion? on view in the Main Gallery from April 23–July 23, 2010. The first major museum exhibition to focus on the late drawings of the American artist Leon Golub (1922–2004), this presentation will feature approximately 50 oil stick and ink on Bristol board and vellum drawings made between 1999 and 2004. It will also include Golub’s only existent unfinished painting —a chalk sketch of two lions— which he started in 2001 but never completed, as well as preliminary ‘background’ drawings and the artist’s original source material from a variety of wide-circulating periodicals.

This exhibition is curated by Brett Littman, Executive Director of The Drawing Center, and will travel to the Mary & Leigh Block Museum of Art at Northwestern University, Evanston, IL (September 21, 2010– December 12, 2010) and The Museum Het Domein, Sittard, Netherlands (January 22, 2011–April 24, 2011).

Although he was most often noted as a painter, Golub used drawing as a foundational tool in his practice. The late drawings on view mark a stylistic and thematic shift from a long-term preoccupation with the atrocities of the external world towards an exploration of the personally revelatory. Departing from his earlier formal constraints, the drawings made after 1999 reveal a liberation of the line and transparency in the mark-making process. Incorporating both pure abstraction and representational forms, Golub used icons such as animals, species composites, and highly-sexualized females in dialogue with skeletons to expose his interest in human virtues, attributes, and shortcomings. Never fully abandoning the political, the drawings often include farcical or contextually specific text. The results are candid examples of an aesthetic immediacy and newfound freedom in the artist’s late work.

ABOUT THE ARTIST
Leon Golub was born in Chicago in 1922 and studied art history at the University of Chicago before serving in the U.S. Army as a cartographer during the Second World War. When he returned to Chicago he enrolled as a painting student at the School of the Art Institute of Chicago, where he received an M.F.A. in 1950, and took his first series of life drawing classes. Along with a group of like-minded artists, including Cosmo Campoli, George Cohen and Nancy Spero, whom he married in 1951, Golub sought to develop a figurative style that responded to the political and existential conditions of the postwar period. Golub drew upon diverse iconography including Greek and Roman sculpture, photographs of athletic competitions, and an archive of journalistic images and mass media. Following a short stint of teaching in the Midwest, Golub and Spero moved to Paris in 1959. Returning to the U.S. by 1964, the artist moved to New York where he created his signature large-scale paintings that responded directly to current events, many of which he staunchly opposed.

PUBLIC PROGRAMS
Sunday, April 25, 2:00pm
Exhibition walk-through with Jon Bird, Professor of Art and Critical Theory at Middlesex University, London. A writer and curator of contemporary art with a particular interest in postwar American art, Bird has worked closely with Leon Golub and Nancy Spero over many years. He curated a retrospective of Golub’s work for the Irish Museum of Modern Art, Dublin, which travelled to the Albright Knox Museum and the Brooklyn Museum in 2000. The revised edition of his critical monograph Leon Golub: Echoes of the Real will be published later this year. In 2012, Bird will curate a Golub retrospective for the Reina Sofia Museum, Madrid. Bird is also a practicing artist and last year had a two-person exhibition of paintings with New York-based artist Samm Kunce at Sideshow Gallery, Williamsburg. He lives in London.

Thursday, May 6, 6:30pm
Panel discussion devoted to the life and work of Leon Golub, including an esteemed group of artists, curators, art critics, and colleagues, who will share their personal experiences and recollections of the artist. Each panelist will be asked to discuss a specific drawing from the exhibition as it relates to his or her own relationship with Golub, and the lessons learned from his important legacy. Panelists will include Samm Kunce, Leon Golub’s studio assistant; Robert Storr, artist/critic, and Dean of the School of Art at Yale University; Susan Harris, independent curator and writer; and Douglas Dreishpoon, Chief Curator of The Albright Knox Art Gallery. Moderated by Brett Littman, the exhibition’s curator and Executive Director of The Drawing Center.

Leon Golub: Live & Die Like a Lion? is made possible by the National Endowment for the Arts and The Dedalus Foundation.
Additional funding for the publication has been provided by Frayda and Ronald Feldman, Harriet and Ulrich Meyer, and Caroline Shapiro and Peter Frey.

Dorothea Tanning: Early Designs for the Stage will present approximately twenty hand-drawn ballet costume designs by Dorothea Tanning (b.1910) created in collaboration with the early modernist choreographer, George Balanchine. Dating from 1945–1953, the designs will be shown together for the first time, and will be accompanied by archival photographs and ephemera related to the staged productions. This series explores the dynamic intersections of dance, performance, visual art, and costume, while drawing important parallels to Tanning’s early discoveries in both painting and sculpture. Taking the form of traditional fashion plates, the blithely rendered drawings are suggestive of bodies in motion and portrayals of outlandish characters through the quirky detailing and sensual drapery of the costumes. This exhibition is curated by Assistant Curators Joanna Kleinberg and Rachel Liebowitz.