This major survey shows installations, sculptures, photographs, paintings and drawings. The nomadic way of life typical of his generation and the principle of constant movement surface in his work in many different ways, ranging from the photograph of his breath on a piano to a Citroen DS that has been sliced lengthwise down the middle and reassembled as a one seater. Orozco has a penchant for exploiting the expressive artistic potential that lies in the ephemeral. 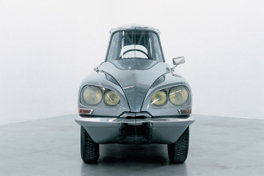 This major survey at Kunstmuseum Basel shows installations, sculptures, photographs, paintings and drawings by Gabriel Orozco (born 1962 in Mexico), created since the early 1990s. Orozco, one of the world’s foremost contemporary artists, commutes between New York, Paris and Mexico City. The nomadic way of life typical of his generation and the principle of constant movement surface in his work in many different ways.

While the earliest works on view were still made in Mexico, to which he regularly returns, the context of Gabriel Orozco’s art since 1992 has been the accelerated throwaway society of North America and Western Europe, particularly New York and Paris. Seamlessly and symbiotically, Orozco unites many different levels of social and visual cultural experience with his Latin American roots.

He has a penchant for exploiting the expressive artistic potential that lies in ephemeral encounters with life on the streets, wherever he may be. He directs his attention to inconspicuous situations and materials, showing a light-footed ease and subtlety in strikingly combining and reconfiguring his findings within the larger context. Throughout, it is the nomadic principle and the readiness to embrace the moment that coalesce into visual artefacts, covering a wide spectrum from his breath on a piano, captured in a photograph, to a Citroën DS, sliced lengthwise down the middle and reassembled as a one seater.

Orozco explores the marginal zones of perception, changing vantage points and locations in a continuum of ceaseless transformation. Tellingly, we repeatedly find ciphers of organic movement as in the Atomists, 1996, drawn configurations of circular shapes and segments that transform explosively compressed newspaper pictures of team sports into cosmological visions.

Orozco’s Working Tables (Mexico 1991–2006), 2006, from the collection of the Kunstmuseum Basel, excellently demonstrate that the formal aspect of his art does not rely on what is available or made: it is an activity. Created in Mexico City, the Tables are an accumulation of small-format objects and found pieces. Between 1991 and 2006, Orozco periodically worked on small sculptures, like balls made of orange peel and modelling clay or cardboard structures, but, above all, he collected and modified found pieces, activating the artistic potential of such diverse items as the inside of a football, rusty scrap iron, the bones of a whale or plastic fried eggs. He stored these objects at his home in Mexico City as a sculptural source of inspiration, like a sketchbook, filled with countless tentative attempts to give shape to artistic ideas and keep an unfiltered record of their effectiveness. These experiments with the things of everyday life and with sculptural processes are a cross between workshop and worldview, exhibiting untold varieties of organic transformation and interaction.

The exhibition is organised by The Museum of Modern Art, New York, in cooperation with the Kunstmuseum Basel, the Musée national d’art moderne – Centre Georges Pompidou, Paris, and Tate Modern, London. It is generously supported by The National Council for Culture and the Arts (CONACULTA) / Fundación Televisa, Mexico.