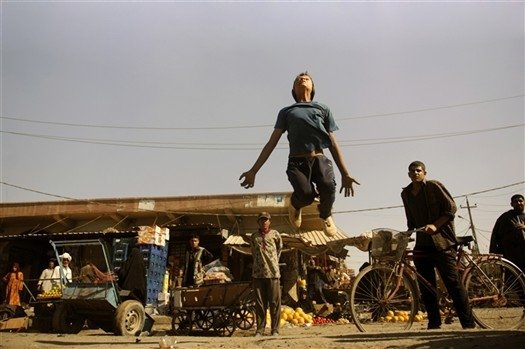 The first comprehensive UK exhibition of new and recent contemporary art from Iraq since the first Gulf War, examining practices that are emerging with fresh perspectives from a culture marked by conflict and turmoil.

This show provides a platform for a new generation of artists who acknowledge the aesthetics of conflict, but are not bound by them. Instead, they are fused with collapsing aforementioned associations and seek to broaden awareness of life beyond the brink of war, pointing toward other immediate concerns across the country.

Selecting works across a wide range of media by 19 Iraqi-based artists for Contemporary Art Iraq, Cornerhouse in collaboration with ArtRole, gives a subjective snapshot of the current Iraq art scene. From installation, performance, video, painting and photography, works presented deal with very individual searches for identity, whether national or historical, addressing tradition, beliefs and other themes that shed light on the fascinating state of Iraq now.

Co-curated by Cornerhouse and ArtRole

Exhibition supported by British Institute for the Study of Iraq (BISI), Centre for the Advanced Study of the Arab World (CASAW) and City Inn.

John Perivolaris
North to North: A Journey in Postcards from Manchester to the Maghreb

The project North to North: A Journey in Postcards from Manchester to the Maghreb by John Perivolaris has been commissioned as part of the AHRC-funded exhibition, New Cartographies: Algeria-France-UK to be held at Cornerhouse from April - May 2011.

This exhibition is one of the major outputs of a three-year AHRC research project, France – Algeria: Visualising a (Post-) Colonial Relationship, which began in Sept 2008, and is being undertaken by Dr Joseph McGonagle (Department of French, The University of Manchester) and Dr Edward Welch (Department of French, University of Durham). The six-week exhibition will examine how relations between the three countries have been represented in a range of contemporary visual media, and confirmed artists include Kader Attia, Bruno Boudjelal, Yves Jeanmougin and Zineb Sedira. The commission project North to North will lead to the creation of an original installation by Perivolaris, which will be premiered at the exhibition.