"The exhibition 'Handgrenades From My Heart' is a meditation upon 'Negative Space' and chance, a return to the human body as both subject and object in art. Only our bodies do not lie for the day we learn to speak is the day we learn to lie, even if our desires and intentions be for the contrary. Negative space is the gap of light between your fingers, the sweat in the palm of your hand, the frustration of something slipping away, slipping through your fingers, just out of reach". (Kendell Geers - 2010) 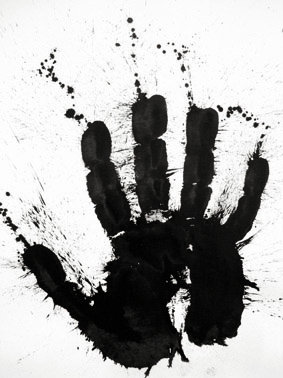 Contemporary Art has painted itself into a corner. The old Avant Garde's demand for constant renewal can no longer compete with the market demand for fresh blood, novelty and the dictates of fashion. The classic art historical concept of Movements and Manifestos have been superceded by seasons and sensations. Artists are as a result no longer judged by their historical resilience but according to their most recent auction sale. A young unknown Indian or Chinese painter can now be "ranked" higher than Duchamp or Manzoni according to the ubiquitous top 100 lists that proliferate in Art Magazines polluting the space between the advertising and advertorial.

The reality of the contemporary art market demand is that artists have neither the time nor the opportunity for real structural renewal, nor the space for philosophical growth and development. Instead of interrogating history or killing their idols, artists, and their market, seem content with slight of hand aesthetic adjustments and cynical asides.

The Avant Garde itself was a reaction to the dehumanising effects of the growing industrialisation of European culture and the increasing insensitivities that Capitalism defined itself by. Through the twentieth century our predecessors were more than happy to rape the planet, abuse their neighbours, and decimate any culture, faith, tradition in the subjugation of every form of life in their pursuit of profit by any means necessary. The golden age of reckless abandonment is thankfully now over and Capitalism hangs on by a single golden thread and the potential role of the artist in society never been more critical. As the planet increasingly claims back what is rightfully hers and our fragile human existence is ripped apart by tsunamis, droughts, famine, earthquakes, riots, religious wars and as the world economies swing into full frontal bankruptcies, what, if any, is the role that art could play ?

The exhibition "Handgrenades From My Heart" is a meditation upon "Negative Space" and chance, a return to the human body as both subject and object in art. Only our bodies do not lie for the day we learn to speak is the day we learn to lie, even if our desires and intentions be for the contrary.

In strictly classical terms, "Negative Space" is defined as that which lies outside or around the subject, image or form, generally unnoticed but essential in framing our perceptions. It could also be understood as the "empty" space between letters, the unspoken invisible silence between words, the pause for breath and the undescribable unutterable thought on the tip of the tongue that never finds expression. Negative space is the gap of light between your fingers, the sweat in the palm of your hand, the frustration of something slipping away, slipping through your fingers, just out of reach. Marcel Duchamp called it "Inframince" being the difference in displaced volume between a clean shirt and the same shirt worn once, or the taste of one's mouth lingering in exhaled smoke.

For some years now I have tried to explore this notion of a Negative Space or Inframince in my drawings and performances, through the impossible containment and fluency of ink being directed and influenced by forces beyond my control. The virginal white paper stands out in contrast with the kinetic expulsion of natural forces, the shadow of a liberated energy field. For "Handgrenades From My Heart" I have tried to translate this energy principle into the third dimension using Plaster of Paris and bronze.

Slipping through my fingers in an ocean of endless possibilities, the warm visceral liquid plaster or wax eventually finds a moment of eternal rest in between infinite potential states of being. Defined according to the laws of chance and dictated to by the laws of nature, the forces of gravity are moulded by the vision of my desires as the work of art finds a unique form conjured out of a states of endless proposals. The sculptures embody a channelling of form in the negative space between intention and desire, between thought and form.

Shunning the superficiality and ego capitalism of contemporary trendiness, I decided to instead embrace the shamanic praxis of Joseph Beuys, weaving into it the spirit of artists like Cesar, Orozco, Nauman, Klein, Benglis, Manzoni and Bourgeois. This project follows on from "A Guest + A Host = A Ghost," my last exhibition at Stephen Friedman Gallery in London, which was a game of chess and an interrogation of Marcel Duchamp's "The Bride Stripped Bare By Her Bachelors, Even." According to the logic of Duchamp's own switch from the cerebral 2 dimensionality of the transparent Large Glass towards the visceral opacity and confrontational eroticism of "Etant Donne" the intellectual dandyism of the found object gave way to a shamanic ritualisation of erotic forms and matter is spiritualised whilst spirit is materialised.

I make no excuses for my radical subjectivity and propose a shift in the ways we understand the artist today. Following the earthquake in Chile the planet has already shifted on its axis and our quotidian concepts of time and reality need adjustment. We no longer live in a world of infinite resources and endless opportunities and the planet demands an "Archaic Revival" on a global scale in order to bring our world back from the cliff edge of complete collapse. Art can lead the way through the embodiment of archetypes that shine in the darkness and fill the emptiness of a spiritual bankruptcy with love and hope.