Art from the Frank Cohen Collection. An exhibition of work by artists whose approach might be considered anti-social or to support positions that fly in the face of conventional morality and good taste. There has always been an iconoclastic element in contemporary art. Each generation challenges its predecessor as it adopts new attitudes and makes art based on ideas in changing artistic and social contexts. Curated by David Thorp. 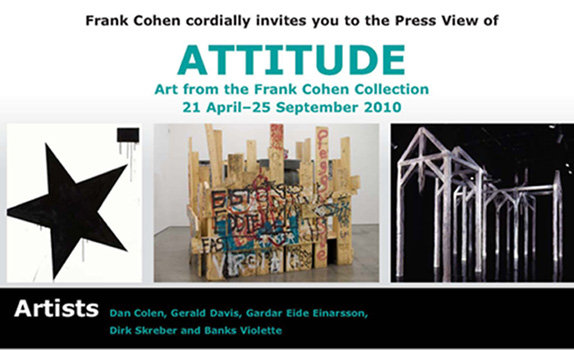 The eighth exhibition at Initial Access will feature a selection of painting and sculpture by Dan Colen, Gerald Davis, Gardar Eide Einarsson, Dirk Skreber and Banks Violette drawn from the Frank Cohen Collection.

ATTITUDE is an exhibition of work by artists whose approach might be considered anti-social or to support positions that fly in the face of conventional morality and good taste.

There has always been an iconoclastic element in contemporary art. Each generation challenges its predecessor as it adopts new attitudes and makes art based on ideas in changing artistic and social contexts. Some of the great movements of the past 100
years such as Dada and Surrealism have confronted taboos and opened up new areas of activity as legitimate territory for artists.

The exhibition will include Banks Violette’s installation Untitled (Church), a monumental sculpture of the ruins of a church cast in salt. The work is based on imagery from an album cover commemorating a murder that took place in Norway as part of a bizarre event associated with a music subculture known as Black Metal. Dirk Skreber commemorates the banal; his paintings of lone train carriages, road accidents and disaster sites record incidents of beauty and horror. Dan Colen reflects on subcultural language.

Dan Colen
Born 1979 New Jersey
Lives and works in New York
Drawing from mass media, environmental experience and sub-cultural language, Dan Colen’s work infuses a sense of magic in the under valued and ordinary. Dan Colen works in painting and sculpture. One of his best known sculptures (not on show) Untitled (Vete Al Diablo), 2006 consists of a graffitied boulder that has been fictionally transplanted from a suburban wasteland. It is in fact made from papier- maché expertly crafted to look like the real thing. Dan Colen creates an ambiguity in the sculpture’s rough hewn appearance, elevating the overlooked and forsaken to a contemplative highly crafted object.

His paintings are often quickly scrawled in spray paint over plywood boards which are built up with sanded layers of moulding base and acrylic; they retain a tension between immediacy of expression and perfection of surface. Spelling out song lyrics, random thoughts, or absurd slogans, Dan Colen’s texts create a form of urban poetry, conjuring up images through word association and impoverished aesthetics. Realism is central to Dan Colen’s practice, sometimes he creates the effect of aerosol spray through meticulous brush technique.

He blurs the boundaries between high and low culture, elevating an intrinsic value from the disenfranchised. In the sculpture Untitled, 2004-2005 displayed in ATTITUDE, Dan Colen has fabricated a ramshackle wooden construction, the kind found on a wasteland in any city. Scrawled and painted on every surface is graffiti accounting its users, their presence and nefarious activities. As immediate and expressive as these writings appear, like the ‘wood’ they mark they are in fact painstakingly manufactured. Reality is further disrupted by the abnormality of the contents of the construction straddling both real and near comically absurd worlds.

Gerald Davis
Born 1974, Pittsburg
Lives and works in Los Angeles
Utilising word and image, Gerald Davis retells us stories from his boyhood and prepubescent years. Sexual obsession, real and imagined girlfriends, lewd mis-adventure, unrealised desire and memories from school are all retold with a calm lucidity. Despite often being explicit and rather crude in content, there is a knowing refinement to the flat clean surfaces of his paintings. The cartooning of these stories offers us a new perspective forcing us not so much to judge as to acknowledge and consider.

In the Prayer of the Boy Artist, 2004 triptych we see the boy artist, head tilted, studiously copying an image from the pages of a magazine. This innocent and boyish obsession is then posited against another more adolescent in nature. His desires and imagined sexual adventures are neatly described in school boy handwriting and crude collage. Alongside this the unspoken, un-met cravings emerge from the canvas, soon to fall back into dissolution Positioned together in this way these seemingly differing targets of obsession are linked together; the wish fulfilment has the same structure, just the drive and locus has shifted.

Amongst these personal memories and obsessions are more common ones that are jointly remembered. In Suicide (Green), 2005 Kurt Cobain’s dead body is depicted lifeless, shotgun in hand. As grotesque as this is, the clean and accurate cartoon rendering as well as the limited green palette uplifts the actual horror of such a scene to a level of near pageantry. Details like Cobain’s converse trainers, his plaid shirt, the pattern on the floor, the beer can, are all minutely obsessed over creating the stuff of urban legend, facts and myths ghoulishly traded. Gerald Davis has reconstructed the scene from these details and memories; serving as a distraction, essentially displacing the sad truth of the situation.

In as much as Davis is willing to open us his past for us and be humiliated, he’s also opening up a common ground of shared experience to which we all can relate. As embarrassing, cringeworthy and grotesque the subject matter is, it’s also comic, honest and deeply human.

Gardar Eide Einarsson
Born 1976, Maglegaard, Denmark
Lives and works in New York
"I like the ability that you can have in art to be sort of wide ranging. In spite of the whole institutional dialogue, the possibilities are wider than they are in most other areas. I like that relative lack of institutional structure" 1

Investigations into various forms of social transgression and arguments for political subversion, Gardar Eide Einarsson's text-based works provoke the critical analysis associated with reading to augment the immediate visceral experience of viewing his art. To this end, his choice of media is determined by his current discourse on communities in relation to their outsiders. Visual imagery borrowed from underground subcultures including the criminal world and left-wing militias, portrayed in a primarily black-and-white palette, gives Einarsson's work a stylish punk sheen that evokes rebellion through its cold, hard-edged rejection of sentiment. His installations often combine paintings leaned against walls as "props," explicit messages printed on flags or illuminated on light boxes, images co-opted from graffiti, skateboarding graphics, or punk music flyers screen printed or painted directly onto gallery walls, videos screened on televisions, photography, and sculpture such as austere furniture centered in the exhibition space.

Mining his understanding of how graphic design and advertising methods manipulate public beliefs, Einarsson appropriates logos, symbols, phrases, and slogans to re-contextualise meaning, creating a tension between imagery and the action it compels the viewer to take. His use of text allows for a directness that both recalls and critiques artworks decrying political injustices made during the 1990s by artists like Barbara Kruger. By staging textual works alongside abstract objects, images, and props, Einarsson embeds his politics more deeply in his search for answers, and through Minimalist formalism he offers opaque or ambivalent translations of his scepticism toward established power structures.2
1 Gardar Eide Einarsson in conversation with Bob Nickas , Purple Magazine vol.III issue 6
2 Source: Trinie Dalton, Whitney Biennial 2008, Whitney Museum of American Art

Dirk Skreber
Born 1961, Lübeck, Germany
Lives and works in Düsseldorf, Germany and New York
"Personally, I find that, as such, the catastrophe is nothing more than transformation in rapid motion, something beyond good and evil. It is a transformation which passes over into a new, permanent state of affairs, something which agglomerates, the energy at a breaking edge grows to an absolute maximum and then ruptures, accumulates, thrusting itself somewhere else and dramatically changes life."3

Dirk Skreber engages with catastrophe, whether man-made or natural, siting himself at a comparative rather than judgemental position. Known for his series of paintings based on natural disasters such as hurricanes and floods, he is more concerned with depicting the effects and their mediated perception rather than the telling of any one story. Often using non traditional methods as a counterpoint to his use of oil paint, he creates regularly patterned grounds from lengths of foam, insulation and parcel tape. This counterpoint acts as a clue to the mediation of images to which we are all subject.

In his Na(h)tanz series of which there are two in ATTITUDE, Untitled (Cowboy & Cowgirl) and Untitled (Concentric), 2004 the Natanz (adding a h translates this to ‘slow dance’) uranium enrichment factory south of the Iranian capital Tehran forms the background to the paintings. Taken from military satellite surveillance photographs, this image places the subject at a distance, giving an overview and only unintelligible detail. Above this floats the Cowboy and Cowgirl locked in the sequence of their dance the layer upon which they stand is composed of concentric or parallel lines. These lines break apart creating waves of power and colour, reminiscent of nuclear blast waves and the moiré effect found on television screens. In many ways this western icon is distant to the Iranian scene below, yet they both are subject to a system which seeks to link them Dirk Skreber presents this scenario as a potential event and point of catastrophe. Combining the two scenes together he shifts the focus from viewing to observing, the thick painted lines serving as the interference layer, the source of which is undeclared and potentially devastating. Despite the works political dimensions the focus falls on the influence this interference exerts.
"His reply is not that of a security expert but rather of an iconoclast who paints pictures...."

Banks Violette
Born 1973 Ithaca, New York
Lives and works in New York
Banks Violette has created a visual language linked to his background and personal history that is derived from pop culture's aestheticisation of death. This highly personal language is intended to provide an account of the disturbing psychology that underlies attitudes and acts that have defined the frustrations and anger of a marginalised group of white American youth. Beneath the surface of Violette’s pared down black sculptures, occasionally redeemed by the white of salt crystals, is a melancholy that sometimes sinks into sorrow. This sense of sadness with which all Violette’s work is imbued is linked to a tragic dimension of pop culture.

Goths and heavy metal have spawned a sub-culture of young people for whom extreme acts of violence are somehow more readily acceptable as part of the process of asserting identity than has been the case in a recent past that includes Violette’s own somewhat troubled youth. Citing examples where musical lyrics become instigating factors to real-life violence, he refers to an over-identification with fiction where fantasy and reality are blurred. Violette is interested in the moral ambiguities that result from this condition rather than seeking a catharsis.

He works backwards from a site of tragedy, exploring the emotional and psychic energy that lies beneath the suburban angst of a group disengaged from mainstream life. The burning of wooden churches in Norway by members of the Black metal music scene during the 1990’s is the subject for Untitled (Church) 2005. The charred frame of a ficitionlised church cast in resin and salt is as much a monument to a groups act of transgression as it is to the mythology and notoriety which subsequently followed.