An initiative by Hotel Bloom! and Centrifugal Projects coinciding with Art Brussels. The focus is not on the commercial gallery sector, but on the project spaces, artists' initiatives and independent curatorial projects that provide important platforms and experimentation grounds for emerging contemporary artists in the international arena. In additiontwo thematic programmes of interest to not only an art-specialist audience but also a broad public. 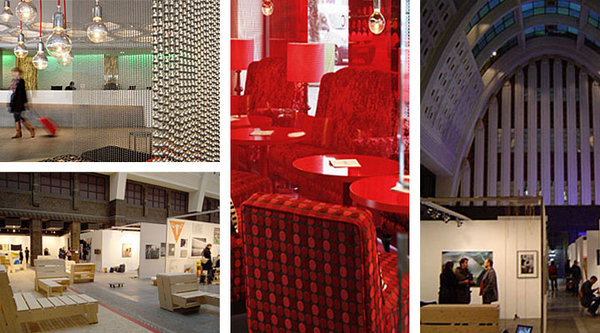 Building on the success of the Projector Art Fair , Trajector takes the core concept on the road for 2010. It will take place in Brussels, in April 2010 coinciding and collaborating with Art Brussels.

In Brussels –as in Rotterdam- the focus is not on the commercial gallery sector, but on the project spaces, artists’ initiatives and independent curatorial projects that provide important platforms and experimentation grounds for emerging contemporary artists in the international arena. In part a celebration and playful game with the role of non-profit organisations, project spaces and independent curators within the art commerce systems, Trajector takes the original concept and re-realises it as a hotel art fair in Brussels' most recent boutique hotel. Tongue-in- cheek, critique or hardcore commercial? That's largely up to the participants to determine. In April, Trajector Art Fair will transform Hotel Bloom! into a vibrant ‘boutique hotel art fair’ with eighteen rooms and a wide range of conference rooms and public spaces providing a platform for a range of international art spaces and curators to present some of the best emerging contemporary art to a Brussels audience.

In addition to these core presentations, Trajector Art Fair will deliver two thematic programmes of interest to not only an art-specialist audience but also a broad public. The first and most substantial of these is ‘Taut – That Certain Tension Between Fashion & Art’. Consisting of an exhibition element and events such as panel discussions, lectures and presentations, Taut engages directly with some of the key issues of creativity at the intersections of art and fashion.

Curated by Ken Pratt & Laurent Dombrowicz – the former Joint Editors in Chiefs of Wound Magazine and respectively an independent art curator and fashion director- the exhibition aspect will juxtapose work by fashion creatives alongside that of contemporary artists to develop a discourse on some of the key issues uniting –and perhaps still separating- contemporary art and fashion practice. This will be complemented by a series of lectures, discussions and events that go deeper into examining some of the key issues at the core of fashion and art practice. The curators are particularly pleased that the Taut programme will premiere in Belgium with its very special histories of fashion and art, since it is perhaps the world’s most ideal location to place the discussions raised by the project.

A second thematic programme ‘The Keith Moon Suites’ responds directly to the context of the fair within a hotel. ‘The Keith Moon Suites’ involves a number of site-specific works by invited artists whose own practice crosses into the world of pop or underground music. A key sponsor for these specialist programmes is the international fashion brand Diesel. Trajector Art Fair is being undertaken in close collaboration with Art Brussels and will involve a number of collaborative events and initiatives. This year Art Brussels has a line-up that consists of some of the most influential galleries in the world – Hauser & Wirth, Lisson, Marlborough, Victoria Miro, Nathalie Obadia, Maureen Paley, Emmanuel Perrotin, Regina, Esther Schipper, Stuart Shave/Modern Art- leading an unexpectedly strong field of excellence. And that, indeed makes it a place to be in April 2010, for both its established fair and this exciting new development.

Full details and press announcements and resources will be available directly from the Trajector Art Fair website from late January 2010 as these emerge over the course of coming weeks.

For any additional queries or information, please contact press@trajectorartfair.org