A Landscape of Known Facts. Sander0s landscape is projected like a lighthouse, a beam that scans the circular room in a slow, continuous, 360 degree revolution. Influenced by the early development of cinematic special effects, A Landscape of Known Facts brings to life the history of the panoramic spectacle, while also layering the projected image with matte painting and textual elements applied to the screen. Curated by Tessa Giblin. 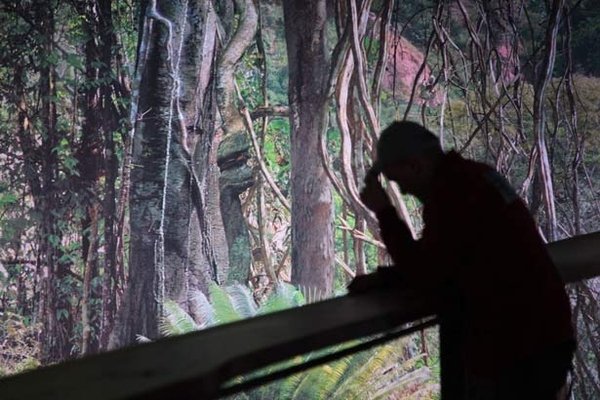 Katya Sander's A Landscape of Known Facts is a newly commissioned artwork that completely transforms the gallery at Project Arts Centre. Sander's landscape is projected like a lighthouse, a beam that scans the circular room in a slow, continuous, 360 degree revolution. Influenced by the early development of cinematic special effects, A Landscape of Known Facts brings to life the history of the panoramic spectacle, while also layering the projected image with matte painting and textual elements applied to the screen. Scanning three different European panoramas, their architecture and their viewers, the camera is positioned off-centre, breaking the perfect circle that is constructed by the panorama to make it appear as if it were a world unto itself. Inside the panorama we hear fragments of conversations – people who travel, see, purchase tickets, behold spectacles, and consume images.

Sander's video is one of landscapes – both the image of the landscape depicted, as well as the landscapes of spectators and their spatial organisations, their bodies, gazes, knowledge and desires projected into the space of the image.

What does it mean to 'look' when one is placed in the middle of a constructed world such as a panorama? Which images are presented? How do they attain value? Which worlds do they teach us about and from where can they be consumed?

For the first decades of the nineteenth century and during their renaissance at the end of the same century, panoramas were a popular choice of entertainment and spectacle. Often installed in purpose-built structures for extended periods of time, a visit to a panorama aroused sensations of likeness and deception, sensations that had perhaps never been experienced in such an overtly illusionist setting in the visual history of painting. Designed to present a panoramic view of the world for both entertainment and education, their battle-scenes and romantically envisaged landscapes drew in the crowds. The artist who first patented the idea of the 360 degree exhibition as 'la nature à coup d'oeil' or 'nature at a glance' was Edinburgh-based Irishman Robert Barker.

His 1787 patent, designed around the same time as Jeremy Bentham's prison Panopticon, focussed on the conditions of viewing, detailing the platform structure, lighting, barriers and other architectural features that could be positioned and constructed to both restrict and open the field of vision with the maximum potential for suspending one's disbelief. The forms of viewing that had begun in the cyclorama constructions later developed into moving panoramas, complete with stage-lighting and other dramatic effects. The panorama as spectacle was eclipsed by the moving image but it had also prepared spectators for the moving-screen experience. As prototype cinemas, the panorama asked the spectator to create movement by circling around the interior, believing in the illusion and surrendering oneself to the fantasy of the real.

By creating a view in all directions the panorama provided a sense of having an overview of the world, and empowered the spectator to know what power knows when looking at the world. While this innovation liberated and democratised the action of viewing for the masses, it also created a world view in which the spectator became a subject, as well as a consumer of images. The construction of an image becomes the construction of a space, and to conquer an image you must first consume it.

KATYA SANDER (b. Denmark, lives and works in Berlin and Copenhagen) is an artist, writer and professor at the Royal Danish Art Academy, whose artistic practice cracks open ways of thinking inside established fields of exchange, be they corporate, public or market-driven, while also investigating the history of spectatorship, and how a public is addressed, produced and negotiated. Sander is part of the collective of artists who produced '9 Scripts from a Nation at War', commissioned by Documenta 12, and her recent solo exhibitions include 'Production of Futures – A Science Fiction about Counting', Künstlerhaus Stuttgart 2008 and 'The Most Complicated Machines Are Made of Words', MuMoK – Museum Moderner Kunst, Vienna 2005. Sander's recent and current participation in group exhibitions include 'Power Games' - Ludwig Museum, Budapest 2010, 'There Is No Alternative', Konsthall C, Hökarängen, Stockholm 2010, 'Coming to you Live' Art in General 2008-09, the 6th Taipei Biennale 2008 and 'October Salon, 49th edition', Belgrade Cultural Centre 2008.

A Landscape of Known Facts has been generously supported by a grant from the Danish Arts Council.

Image: A Landscape of Known Facts, 2010. Image courtesy of the artist and Asisi Gasometer, Leipzig