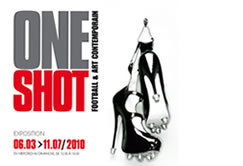 B.P.S.22, the space for contemporary creation of the Province of Hainaut (Charleroi, Belgium), schedules an exhibition dedicated to contemporary art and football until 11 July 2010. Far from limiting itself to sports news (the Football World Cup) this project, entitled One Shot!, approaches numerous facets of this popular sport in connection with a multitude of challenges of the contemporary world. It also brings out the relationship that current artists maintain with the universe of football.

The starting point for this exhibition is the thoughts expressed by the Hungarian writer Péter Esterházy, who among others wrote Journey to the Depths of the Sixteen-Metre Line, a brilliant and comprehensive survey of both philosophical and autobiographical considerations on football. A former amateur footballer himself, Esterházy considers Ferenc Puskás, the mythical Hungarian football player of the 1950s, as a perfect metaphor for the modern world: "Puskás is the last public figure in football, a familiar personality, the last flash of light in modernity, the way towards the unique metaphor. After him, there are no more (only) stars, the situation of existence no longer has solutions, there are only versions of the answer, exemplary versions, of a high level (Cruyff, Pelé, Maradona)." And further in the book: "In other words: It is with Puskás that the game stops and that the age of entertainment begins."

Could football, the way it is covered by the media nowadays, metaphorically summarize the challenges of today's world? It is therefore based on this assumption that the first two works of the exhibition were selected. Rather than Ferenc Puskás, the Northern Irish player George Best is the one who seems to have best embodied the fulfilment of the modern dream, especially in the film Fussball wie noch nie that German director Hellmuth Costard dedicated to him: throughout a match against Coventry City, six 16-mm cameras closely follow Manchester United's star attacker, without paying any attention to the match itself. With all the attention focused on him alone, Best is therefore able to control his own space-time continuum, while the very fluid editing, alternating between quick accelerations and recovery stages, follows the moves of the one they used to call the "5th Beatles".

In reverse, thirty years later, artists Douglas Gordon and Philippe Parreno use seventeen cameras to follow the French player Zinedine Zidane during a match with Real Madrid, his last club, against Villareal. They thus deliver the portrait of an individual who is omnipresent in the media, yet whose personality remains elusive as it is exploded in a multitude of different stances. The pace of the film is made to be breathless, frantic even, via an editing technique taking its inspiration from both a video clip and the aesthetics of a video game. The combination of both projections, in the museum version of the work, heightens even further the feeling of speed and explosive power. The player appears disembodied, a purely virtual construction subject to a pace that is outside his control and imposed by media rules that, more than ever, have a crucial impact.

Another fifty works or so have been added in-between those two works, each exploring an aspect of today's football that might echo the modern world.

Catalogue (64 pages / Languages: English, French): designed as a testimony to the Panini albums, the catalogue compiles the exhibited works, a short explanatory note, and a general overview of the guiding principle. It also includes a number of stickers!