tue-sat 2-7pm and by appointment

In Two Minds. The exhibition's title refers to the two opposing cognitive spaces with which we must negotiate on a daily basis. The works in this exhibition highlight the fluid buffer zone between these two states, by soliciting the spectator's involvement in situations the artist keeps open-ended and liable to further, theoretically endless, speculation. Each work in the show is the result of a time-based developmental process that spans from a few hours to a few years. 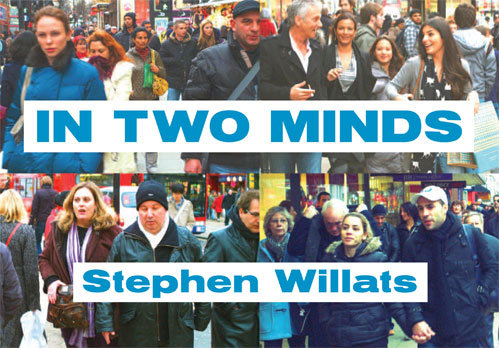 For the first time, Erna Hecey is pleased to present the recent work of the British Artist Stephen Willats at her Gallery in Brussels. While Stephen Willats work has been presented extensively in Europe and elsewhere, it is the first exhibition in Belgium for two decades and gives an opportunity to see an acknowledged practice here in Brussels.

Stephen Willats work has always focused on a socially imbedded practice that seeks to operate as an agent of transformation in society. Since the late 1950s, Willats has been investigating the dynamics between individuals and their surroundings. Informed by cybernetics and learning theory, and covering a wide range of media – from drawing and installation to text and photography – Willats’ work emphasises collaboration and transmission over the production of singular objects.

For Willats, art is capable of social change by making us aware of what lies beneath consciousness and the status quo, and by revealing the value of mutuality and complexity in human interaction. In the everyday scenarios he examines, the spectator is invited to engage in a process of perceptual transformation, thus becoming an active participant in the work’s outcome. As Willats writes:

As a counter force to perceptual conformity, the artwork provides the audience with a symbolic environment in which connections and interaction can be made between disparate information in ways which would not be permissible within the reality of their own world.

The particular thematic connection between the works included in In Two Minds is the relation between two people – or two groups – and the transformations such relations bring about on the level of the individual and of the society in which she or he takes part. For Willats, the encounter between two people constitutes the basic binary system from which any number of behavioural scenarios can be played out and tested: without one person interfacing with another, society would simply not exist.

The exhibition’s title further refers to the two opposing cognitive spaces with which we must negotiate on a daily basis. On the one hand there is what is expected of me, the norms that dictate who and what I am in a given context – an office worker, a parent or a retired person. On the other, and regardless of the socially construed identity I uphold, I have the license to diverge from norms, imagine and project different outcomes and resolutions. The works in this exhibition highlight the fluid buffer zone between these two states, by soliciting the spectator’s involvement in situations the artist keeps open-ended and liable to further, theoretically endless, speculation.

Each work in the show is the result of a time-based developmental process that spans from a few hours to a few years. In the course of the process the artist, often in consultation with collaborators, defines a physical context – a room, a footpath, a tower block, a bridge or a shopping parade. This physical starting point acts as a matrix in which networks will be made to appear through the work. Willats’ practice may thus be said to consist in creating and experimenting with the conditions in which these networks occur – or can occur when the networks are affected by the artist’s creative involvement.

In the work featured at Erna Hecey, the language of film (takes, close-ups, soundtracks) emphasises the multi-channel fluidity of common, everyday situations. In Going Over the Other Side (2001) stages the passage across a footbridge which the artist divided into twelve sections. In each section, two models enact a form of exchange, a transformative process documented through still photography by nine invited participants. The multi-panel From My Mind to Your Mind (2005) extends the unpredictability of the interpersonal encounter to the viewer, inviting her or him to project her/himself into the work by formulating responses to instructions put forward by the artist, starting with ‘Imagine yourself entering this situation. How would you describe the scene before you?’

Willats’ works perform the function of catalyst, focusing on overlooked spaces of transition where variability can overpower normative restrictions, and where the individual’s ability to re-code the signs that make up her or his environment can be expressed. In Imaginary Journey (2006), this zone of potentiality is the shopping parade, of which Willats asked a group of participants to document a single ‘bandwidth’ of information – such as passers-by, institutional signs and textures. In the Super-8 films From Moment to Moment (2006) and One to One (2010), the artist himself documents the experience of deciphering the signs bombarding the person walking through the streets of Amsterdam and Brussels, respectively.

In another set of works included in In Two Minds, the artist trains his camera and pinpoint microphone on the transformations of interpersonal networks that take place when people cross, however briefly, the threshold into uncharted and unscripted territories. In Around a Network (2002), close-ups of people speaking on their mobile phones are represented on a single panel, each image connected to all the others by means of a zigzagging arrow and captioned by an overheard expression (‘Bon voyage!’, ‘See you later’). The three panels of Random Moments and Simultaneous Encounters (2000/2001) capture three different scenes of two people in a crowd, at a relatively far, close and very close range from the artist. The cognitive dissonance that occurs in the passage between different structural formations appears at its most explicit in At a Moment of Uncertainty (2007), a series of portraits of individuals coming out the London underground at Oxford Circus: suddenly, the squinting and disorientated travelers need to re-situate themselves in response to a radically different set of physical and psychological parameters.

If the grid is the matrix from which Willats generates his scenarios, it is flexible enough to allow for chance to disrupt any pre-imagined script. The titles of each of the four panels of In Response To Each Other – ‘A Chance Event’, ‘A Random Decision’, ‘A Spontaneous Expression’, ‘A Changing Perspective’ – make clear that whenever people interact, various, often contradictory forces compete to determine the situation’s outcome. Among these forces are projections, preconceptions, anticipations, fears and normative cultural and societal pressures. In Willats’ work, the geometrical configurations of these forces may be staged and graphically transcribed, but never do they settle into the single-channel or the deterministic.

The artist lives and works in London.

With special thanks to Antony Hudek