'Innen Stadt Aussen' (Inner City Out) is the first solo exhibition by the Danish-Icelandic artist Olafur Eliasson in a Berlin institution. The exhibition's central theme stems from Olafur Eliasson's close relationship with Berlin, the city in which he has lived and worked for many years. It is also where he has set up his multi-faceted studio, combining the functions of research, production and teaching. Since 2009 he has held a chair at Berlin's University of the Arts, where he heads the Institute for Spatial Experiments. Curated by Daniel Birnbaum. 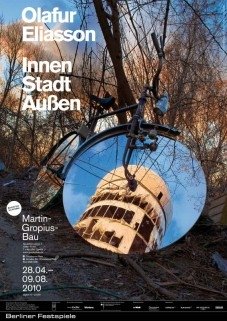 Innen Stadt Außen (Inner City Out) is the first solo exhibition by the Danish-Icelandic artist Olafur Eliasson in a Berlin institution. The central theme of the show, which has been curated especially for the Martin-Gropius-Bau by Daniel Birnbaum, is Berlin, the city in which the art- ist has lived and worked for many years. Here he has set up his multifaceted studio, which combines research, experimentation and production; and as a professor at the Berlin Univer- sity of the Arts founded the Institut für Raumexperimente (Institute for Spatial Experiments) in April 2009. The exhibition concerns itself closely with the relationship between museum and city, architecture and landscape, and space, body and time. The site-specific investigations within the museum are amplified through various projects in public space, thus linking the Martin-Gropius-Bau to other places within the city. The entire project includes 28 works, most of which have been created especially for this occasion.

In the words of Daniel Birnbaum:
Innen Stadt Außen is based upon Eliasson’s close relationship with Berlin, but perhaps it is also the other way around: the life of Berlin is integrated into Eliasson’s work. Similarly, while the Martin-Gropius-Bau is a place in the city, in this exhibition, the city is brought into the museum. Large slabs of granite from the sidewalks of Berlin, for instance, form a pedestrian space inside the galleries.

The impression sometimes arises that Eliasson’s art is mostly about nature, and, more pre- cisely, about powerful natural phenomena such as wind, water, fog, and light. However, he uses these merely as means to make artworks whose construction is often laid bare to visi- tors, as when the structural support of a lawn, ‘flying’ outside a first-floor window, is left in full view. Focus is on the very process of seeing and experiencing the world. Your experience.

The mirror recurs throughout Innen Stadt Außen and turns insides into outsides and vice versa. Bicycles with oddly dematerializing mirror wheels appear across Berlin, as do mirrors in unexpected corners. In one work, a van with a very large mirror attached on one side drives slowly through the city, thereby streaming its live, ephemeral filmic portrait. The mirror introduces a surprising split-screen effect where the actual and the reflected surroundings coexist, simultaneously but differently. It brings into motion the static houses and buildings through gliding distortions. This offers not just a doubling of space, but reversed extensions of space into space, carrying the brief imprints of pedestrians, cyclists, and cars, as they make their way through the city.

Eliasson’s capacity to double, extend, and turn inside out is nowhere more visible than at the heart of the Gropius-Bau. He eclipses the ornaments of the interior facade by installing a gargantuan kaleidoscope, reaching to the skylight, that catapults the viewer into a perplexing architecture of infinite reflections. With simple means, the artist stages the visible illusion of a crystal palace where the visitors, enveloped in this porous architecture, are suspended be- tween inside and outside.

As part of the exhibition Innen Stadt Außen, Olafur Eliasson’s The blind pavilion can be seen on the Pfaueninsel, Berlin, until October 2010 (free entrance).

The blind pavilion – an outside project accompanying the exhibition

Olafur Eliasson’s The blind pavilion (2003) on the Pfaueninsel in Berlin is one of several interventions in the public spaces of Berlin in connection with the artist’s solo exhibition Innen Stadt Außen. The pavilion is located on the northeast banks of the Pfaueninsel – an island situated in the River Havel near Potsdam – where it can be visited until 31 October, 2010.

The blind pavilion consists of a double-layered steel construction clad in a series of transparent and translucent polygonal glass segments. Visitors can walk between the glazed layers that at some times reflect and some times obscure the surrounding area. The pavilion’s structure follows a central perspective geometry. The panes of glass are arranged in such a way that the viewer is surrounded with a completely black panorama when standing in the pavilion’s centre – an illusion which collapses when he or she moves a step to the left or right. The visitor’s movements expose the ‘perfectly blinded view’ as a mere construction and at the same time presents the island’s unique surroundings in an entirely new light.

Representing Denmark at the 50th Venice Biennale in 2003, Eliasson transformed the structure of the Danish Pavilion, which he called The blind pavilion, with multiple installations and by constructing a wooden ramp that wrapped around and over the building. This ramp connected the interior and exterior spaces and formed a continuous loop that visitors could follow, culminating in the namesake pavilion on top. The pavilion was later exhibited on a hilltop on Videy Island in Iceland. It can now be found on the Pfaueninsel, where it invites visitors to engage in a special walk around the island.

Martin-Gropius-Bau, Berlin and on other sites in Berlin