Picasso in The Metropolitan Museum

A landmark exhibition of 300 works by Pablo Picasso, provides an unprecedented opportunity to see one of the most important collections in the world of the artist's work. The first exhibition to focus exclusively on the remarkable array of works by Picasso in the Met's collection. The exhibition reveals the Museum's complete holdings of the artist's paintings, drawings, sculptures, and ceramics -never before seen in their entirety- as well as a significant number of his prints. 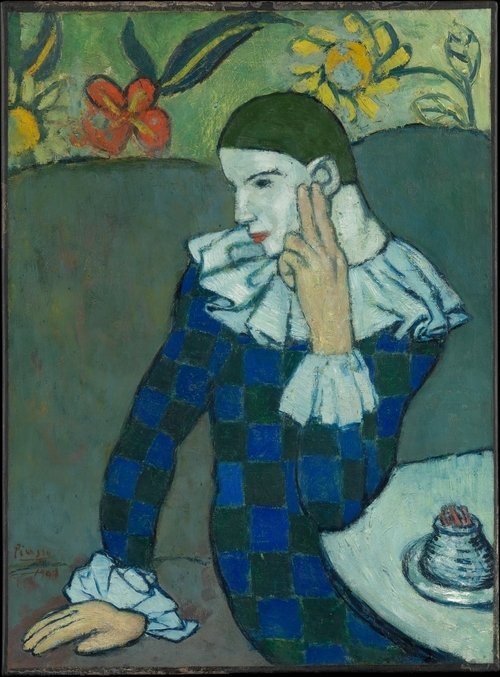 Picasso in The Metropolitan Museum of Art, a landmark exhibition of 300 works by Pablo Picasso (Spanish, 1881–1973), will provide an unprecedented opportunity to see one of the most important collections in the world of the artist's work. On view at The Metropolitan Museum of Art from April 27 through August 1, 2010, this is the first exhibition to focus exclusively on the remarkable array of works by Picasso in the Met's collection. The exhibition will reveal the Museum's complete holdings of the artist's paintings, drawings, sculptures, and ceramics—never before seen in their entirety—as well as a significant number of his prints.

The exhibition encompasses the key subjects for which Picasso is so well known: the pensive harlequins of his Blue and Rose periods, the faceted figures and tabletop still lifes of his Cubist years, the monumental heads and classicizing bathers of the 1920s, the raging bulls and dreaming nudes of the 1930s, and the rakish musketeers of his final years. Picasso in The Metropolitan Museum of Art will feature 34 paintings, 58 drawings, a dozen sculptures and ceramics, and an extensive selection of prints (some 200 from a total of 400), all acquired by the Museum over the past 60 years. Importantly, the exhibition includes many works on paper by Picasso that have rarely, if ever, been exhibited before at the Metropolitan.

The exhibition is made possible by the Iris and B. Gerald Cantor Foundation.

The Metropolitan's collection reflects the full breadth of Picasso's multi-sided genius as it asserted itself over the course of his long and influential career. The works range in date from a dashing self-portrait of 1900 (Self-Portrait "Yo") by the 18-year-old Spaniard to the fanciful Standing Nude and Seated Musketeer (1968), created when the artist was 87.

Picasso's iconic portrait of Gertrude Stein from 1906—a bequest of the writer herself in 1946—was the first painting by Picasso to be acquired by the Metropolitan. Over the next six decades, the holdings were shaped by a succession of purchases and gifts from more than 25 donors, among them other pioneering champions of modernism, such as Alfred Stieglitz and Scofield Thayer, and such illustrious collectors as Florene M. Schoenborn, Mr. and Mrs. Klaus G. Perls, and Jacques and Natasha Gelman.

The collection is notable for its remarkable constellation of early figure paintings, which also include: Seated Harlequin (1901), from the beginning of his Blue period; At the Lapin Agile (1905), in which the artist depicts himself dressed as a melancholy harlequin; and a self-portrait from 1906 that reflects Picasso's encounters with African and Iberian sculpture. Among the many other celebrated paintings in the exhibition are Woman in White (1923), The Dreamer (1932), and Dora Maar in an Armchair (1939).

The Metropolitan's collection of Picasso's works also stands apart for its exceptional cache of drawings, which remain relatively little known, despite their importance and number. Examples of the numerous compelling drawings in the exhibition are: Standing Female Nude (1910), one of the key works shown in Picasso's first U.S. exhibition, at Alfred Stieglitz's 291 gallery in 1911; a 1915 portrait of legendary art dealer Ambroise Vollard; and Head of a Woman (1922), a powerful chalk drawing from his Neoclassical period of the early 1920s. In addition, the exhibition features an extraordinary group of some 200 prints, including: The Frugal Repast (1904); Blind Minotaur Led by a Girl through the Night (1934); and a number of color Linoleum cuts from the 1950s and 1960s, such as Portrait of a Woman, after Lucas Cranach II (1958) and Bacchanalia with Kid and Spectator (1959).

In preparation for this exhibition, all of Picasso's works in the collection have been studied closely, and many have been conserved to reveal the artist's intentions or to restore their physical integrity. The exhibition will disclose a number of exciting discoveries made during the research and conservation process. X-rays and infrared reflectography of several Picasso canvases, such as La Coiffure (1906), have revealed paintings underneath paintings, bringing to light new information about the artist's working process. As part of the exhibition, there will be video displays that incorporate the Museum's recent research photographs to illustrate how Picasso revised his compositions, styles, and themes while re-working specific paintings.

Furthermore, Picasso's large Rose-period painting The Actor (1904–05), which has undergone conservation after being damaged in the galleries in January, has been restored and is featured in this exhibition. This major work inaugurated Picasso's shift from the Blue-period world of tattered beggars and blind musicians to the Rose-period imagery of acrobats dressed in costumes from the commedia dell'arte. Picasso painted The Actor on the back of a previously used canvas, after covering the earlier composition with heavy paint. The picture on the reverse appears to have been a Symbolist landscape painted by another artist. The exhibition will provide more details on the history of this intriguing painting.

Complementing the presentation of the artist's works will be photographs of Picasso by Man Ray, Brassaï, Arnold Newman, David Douglas Duncan, and others, all drawn from the Museum's collection.

The wall colors for the exhibition are provided by Farrow & Ball.

Tru Vue donated a portion of the Optium Acrylic Glazing® for the works of art.

Picasso in The Metropolitan Museum of Art will be accompanied by the first comprehensive catalogue of the Metropolitan's collection of works by Picasso. This illuminating publication has been prepared by members of the Museum's curatorial and conservation staff under the direction of Gary Tinterow, who edited the catalogue and wrote the introduction. A Picasso scholar, Mr. Tinterow is known for his highly acclaimed exhibitions and publications Master Drawings by Picasso, The Essential Cubism, Juan Gris: A Retrospective, and Picasso Classico.

The catalogue provides insightful entries for nearly 100 works by Picasso, furnishing the latest technical and documentary findings, along with full records of the provenance, exhibition history, and references. The 360-page catalogue also features 600 illustrations; an overview of the history of the collection; and illustrated checklists of the ceramics and the entire collection of prints by Picasso, which number nearly 400. The catalogue is published by The Metropolitan Museum of Art in association with Yale University Press and will be available in the Museum's bookshops ($60 hardcover, $35 paperback).

The catalogue is made possible by the Iris and B. Gerald Cantor Foundation.

Educational programs will include a Sunday at the Met lecture and film program, programs for both English- and Spanish-speaking families, teen programs, gallery talks, and a teacher workshop. A three-part lecture series with Gary Tinterow on April 22, April 29, and May 6 will focus on multiple facets of Picasso's life and legacy (tickets required). In addition, on June 27, the Museum will offer a free day of programming that will feature a film screening, lectures, discussions on poetry, and a musical demonstration.

An audio tour, part of the Metropolitan's Audio Guide program, will be available for rental ($7, $6 for members, and $5 for children under 12). Featuring an introduction by Metropolitan Museum Director Thomas P. Campbell, the audio tour is led by Gary Tinterow and includes commentary by Diana Widmaier Picasso, granddaughter of Pablo Picasso, and John Richardson, art historian and Picasso biographer, in addition to several curators and a paintings conservator on the Museum's staff.

For information about programs, visit the Museum's website at http://www.metmuseum.org/events