The group exhibition brings together six projects that cut across the poetic and political ground between the individual and the group; the local and the global; this moment in time and that place in history. Using performance, moving image, painting and printed matter, the artists examine how context is defined and consider how it can be re-imagined to activate social spaces for renewed thought and action. Curated by Ryan Inouye. 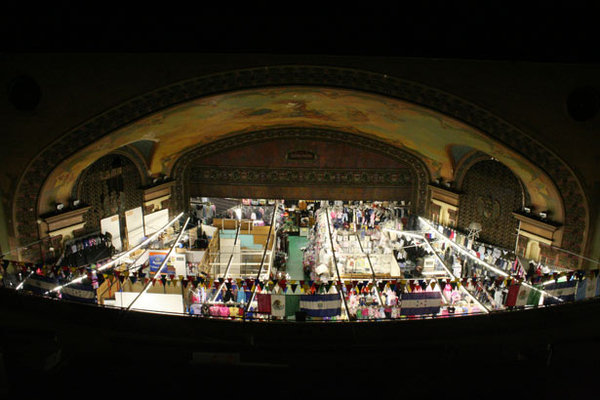 The group exhibition Never Very Far Apart brings together six projects that cut across the poetic and political ground between the individual and the group; the local and the global; this moment in time and that place in history. Proceeding from the particular conditions in which they live and work, these artists explore distance as both border and bridge—considering how a finite position may also parallel or intersect with seemingly disparate places or distant times. Using performance, moving image, painting and printed matter, the artists examine how context is defined and consider how it can be re-imagined to activate social spaces for renewed thought and action. Organized by REDCAT curatorial assistant Ryan Inouye, the exhibition features new and recent works by Terry Chatkupt, (Los Angeles), Michelle Dizon and Camilo Ontiveros (Los Angeles), Jennifer Hayashida and Benj Gerdes (New York), Adriana Lara (Mexico City), Elana Mann (Los Angeles) and RJ Messineo (St. Louis, Missouri).

The exhibition includes two collaborative projects, both of which explore possibilities of revisioning the relationship between the present and the past. In the case of Michelle Dizon and Camilo Ontiveros' Westlake Theatre (2009), the video installation mines the layers of Los Angeles history that are held within the city's majestic 1926 cinema house. The proscenium that once presided over images of early Hollywood now arches across a swap meet that occupies the orchestra level below—bridging the various economies of production and presentation housed within the walls of one structure. Benj Gerdes and Jennifer Hayashida's 16mm film loop Populus Tremula (2010) channels the life of Ivar Kreuger (1880–1932), the industrialist, financier and founder of the Swedish Matchstick Corporation. While the camera follows the manufacturing process in two factories in operation since the 19th century, a sequence of superimposed textual interventions disrupt the seamless narratives advanced by industrialization and the nation state.

The exhibition moves from spaces of critical conjecture to immediate exchange between individuals. Elana Mann's Can't Afford the Freeway (2008–10) is a performance video that grew out of conversations she shared with novelist and Iraq War veteran Captain Dylan Alex Mack. Oscillating between the experience of driving and being driven, the work pairs footage of the artist maneuvering her body in and around her station wagon with audio of Mack and Mann discussing the perils of vehicular travel in Iraq. The artist reconsiders the everyday relationship to her car as private space or personal freedom. Adriana Lara's practice examines similar questions of agency by creating the conditions for dialogue. Through her involvement with Mexico City-based art office Perros Negros, Lara serves as editor of Pazmaker, a free, self-distributed foldout that gathers authors from various places, periods and disciplines. Conceived as both a meeting point and means of distribution, the publication facilitates ongoing exchange between cultural producers in Mexico and those working abroad.

Shifting from public dialogue to personal narrative, Terry Chatkupt's video trilogy Trail Memories (2008), Field Memories (2009) and Park Memories (2010), navigates visual and psychological passageways through open fields and wooded expanses outside cities the artist has called home. These sparsely populated landscapes provide a quiet backdrop for the artist's voiceover script, which contemplates the internal mechanisms that underlie notions of home and belonging. RJ Messineo's painting practice stems from quiet and continual acknowledgement of her immediate surroundings. The artist's recent works on mirror, window screen, and wooden lattice throw into relief the contingency of the paintings surface and the limits of its frame. The artist's new works on wooden lattice, Shield Painting (garden) (2010) and Concept of Yearning (2010), continue to forge elements of her personal life with a language that has a public presence.

Although conceptually abstract, the exhibition considers what material ground could emerge when circumstances are thought together that usually stand apart. Re-charting the contexts in which they live and work, these artists identify new spaces for reassessment, reinvention and possibility.