Double Infinity is a collaborative encounter between a north-western European art museum and an Asian art initiative and comprises of an exhibition, a performance series, a lecture programme and a publication. Double Infinity marks the first time that a European museum opens itself and its collection to the responses of artists living and working in China - responses that form a host of enriching, humorous and critical insights. 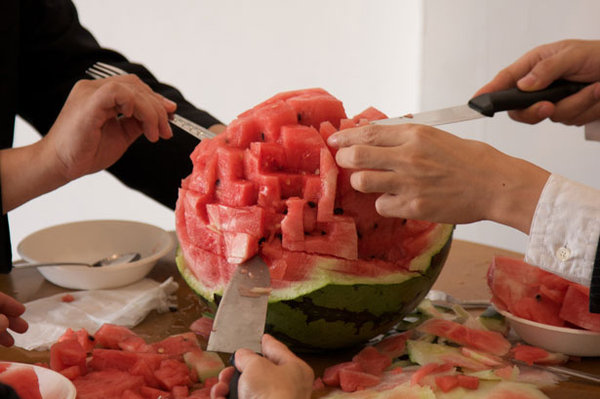 On the 29th of April Double Infinity, a joint initiative by the Van Abbemuseum and Arthub Asia, will open at the Dutch Culture Centre in Shanghai, parallel to the World Expo 2010. Double Infinity is a collaborative encounter between a north-western European art museum and an Asian art initiative and comprises of an exhibition, a performance series, a lecture programme and a publication. Double Infinity marks the first time that a European museum opens itself and its collection to the responses of artists living and working in China – responses that form a host of enriching, humorous and critical insights. The festive opening of the programme on the 29th of April 2010 will be conducted by Eric Verwaal, the Consul-General of the Kingdom of the Netherlands in Shanghai and will feature a performance by Zhou Xiaohu. On the 15th and 16th of May an extensive public programme with discussions and performances by Julika Rudelius and Surasi Kusolwong, and others, will be held at the theatre in the Dutch Culture Centre, Shanghai.

The Double Infinity project loops around and crosses over itself time and again. It is at one and the same moment an exhibition, a performance series, a lecture programme, a publication, a promotional tool, a celebration, a collaboration and a playful look at international relations.

The project is organised on occasion of John Körmeling’s design of the Dutch Pavilion, Happy Street, at the 2010 Shanghai World Expo. It seeks to bring two states and cities – China and the Netherlands, Shanghai and Eindhoven– into an imagined dialogue with each other, drawing on their everyday realities and uniqueness. Equally, Double Infinity focuses on artists’ visions of cities and citizenship, real and imagined architectures and the claims of cosmopolitanism made by world exhibitions through history and across continents.

Double Infinity is the result of a collaborative encounter between a European museum, the Van Abbemuseum in Eindhoven, the Netherlands, and the Shanghai-based art intiative, Arthub Asia. The works exhibited are in part drawn from the Van Abbemuseum collection and in part produced by artists at the invitation of Arthub Asia.

The original inspiration for Double Infinity lies in the artistic approach of John Körmeling. His wide-ranging, cross-disciplinary, unconventional stance towards architecture, urban planning and design has led to a particular selection criteria for the works from the Van Abbemuseum collection and from the participating artists from China and rest of Asia.

The work of Thai artist, Surasi Kusolwong, for example will transform the exhibition space into a playground for a peculiar “treasure hunt”. The back of the gallery is filled with tonnes of thread waste, into which a gold necklace with the Chinese symbol for “Double Happiness” will be hidden every week – made available only to lucky members of the audience who find it. Kusolwong uses the current world economic crisis as the underlying motive for developing this installation, which connects the traditional value of gold and Chinese culture, to the shifting the focus of the media from economic affairs to art.

Another example is Comfortable Collective, an artist collective based in Shanghai set up by young Shanghainese artists and in this edition includes Gao Mingyan, Jin Shan, Li Mu and Maya Kramer. Together, they focus on the cultural conflict that is inherent to artistic methods of working site-specifically, inciting viewers to participate by physically experiencing the works of art. Comfortable is concerned with relational aspects of art-making and the role of the collection within an art system. In this case, the group has responded to the Van Abbemuseum’s collection by manipulating, copying, moulding and dropping works from the collection, laboriously adding further layers to the finished art objects. How can an artist’s attitude influence the perception of an entire collection?

The performance and lecture programmes present a mix of European and Asian responses to the project’s main conceits.

During the exhibition period of Double Infinity performances take place on several occasions:

b 29 April - The Party Camp Project by Zhou Xiaohu

During the opening of the exhibition Zhou Xiaohu invites all local and international guests as well as party waiters and technical staff to join the opening, if they follow a series of orders made by the artist.

b 15 May - Rites of Passage by Julika Rudelius

Originally conceived as a film, Rudelius will organise a live performance around the notion of translation. Her work will be simultaneously translated into Chinese, Dutch and English, in the live context of the performance, creating a continuous shifting of meaning in the work.

Thai artist, Surasi Kusolwong installs a whole room full of waste thread material in which a golden necklace is hid every week and can be found by lucky visitors. The finder is able to keep the necklace, making the “game” a truly worthwhile experience, playing with the extremes of value within society.

The publication, designed by Dutch designer, Joost Grootens, seeks to map a world of crossovers and collisions between art and urban design starting from both Eindhoven and Shanghai. Through photographic essays Jiang Jun and Ingmar Swalue conceptually and aesthetically locate these strange but close sites for our comparison. The book includes contributions by the artists and curators of Double Infinity and an interview with Pieter van Wesemael, an urban designer and Professor at the Technical University Eindhoven in Architectural Design and Urban Culture. “Today, tomorrow, but not too far” is a quote by Van Wesemael, which he considers a more pragmatic realism in the 21st century World Expo than the focus on history in the 19th and the focus on the future in the 20th century.

Image: XIJING MEN, I Love Xijing, 2009
Courtesy of the artists