Marcel Duchamp and the Forestay waterfall

In August 1946 Marcel Duchamp spent a few days at the Bellevue Hotel near Chexbres. During his stay he discovered the Forestay waterfall. There was never a research, why the artist chose this waterfall and not another one to become the starting point and eventually the landscape of his famous final masterpiece 'Etant donnes'. A multidisciplinary event: a Symposium, two exhibitions group with works from more than 40 artists, concert and site specific intervention spot a light on the influence of Marcel Duchamp's masterpiece. 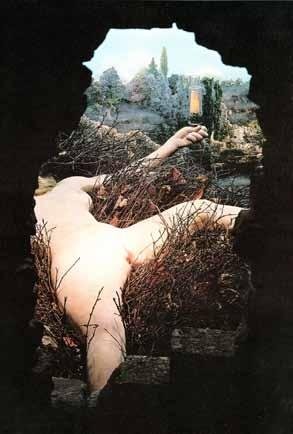 Motive and contents of the project

In 1946 Marcel Duchamp spent five weeks in Switzerland, five days of which, from 5 to 9 August, at Lake Geneva with one of his lovers, Mary Reynolds. He took up residence at the Bellevue Hotel (today, Le Baron Tavernier) in Bellevue near Chexbres. The hotel is located in the very heart of the Lavaux vineyards which have been designated a world heritage site by UNESCO. The hotel on the Route Corniche offers the most striking panoramas in the region with a magnificent view of the lake flanked in the background by the mountains of Vaud, Valais and Savoy and the entire chain of the Jura range. On clear days one can see practically the entire lake from Villeneuve to Geneva, as if it were a vast bay.

The Corniche runs through the extraordinary vineyards of the region, linking Chexbres with the villages of Epesses, Riex and Cully. The Bellevue Hotel is also only some 100 meters away from a spot known locally as the “balcon du monde”, which affords a spectacular view of the lake as well as a feeling for the sheerness of the vineyards along the Dézaley slope. Their steep gradient also explains the waterfall between Bellevue and Chexbres. The topography is rocky and precipitous, with the water gushing out from under the buildings in the hamlet of Chexbres, as if it were coming out of their insides, and then cascading in cataracts down to the lake—exactly on the border between the communities of Chexbres and Puidoux (to which Bellevue belongs). Le Forestay, as the waterfall is called, consists of three steps. Surging over the cliffs in Chexbres, it then slows down for a moment before crashing onto the back of the Dézaley hills below. There it is contained in a brook for a few hundred meters until finally gushing out over another cliff near the historic village of Rivaz to plunge into Lake Geneva where the shoreline is at its steepest and therefore gives a most perilous and exciting impression.

The Bellevue Hotel where Marcel Duchamp stayed is situated not far from the first step of Le Forestay. Night after night he must have heard the roar of the waterfall sundering the idyllic silence, its incessant gushing resembling the unexpected din of ocean breakers. By day, the waterfall is rather inconspicuous, almost hidden away, in reverse proportion to the imposing panorama of the lake. It cuts through the landscape of the vineyards, carving a vulva-like path down the hillside that is partially concealed by pine trees and woods. Duchamp took a picture of this topography and incorporated it into his last great masterpiece, the installation Etant donnés: 1° la chute d’eau, 2° le gaz d’éclairage (1946-1966). It is the chute d’eau, the vagina of nature, that rushes down between two spread-eagled flanks. One can still identify the waterfall today despite substantial changes in the locality over the past 60 years. Right in the streambed, at the bottom of the first fall, there are still two large boulders, one of which is clearly discernable in Duchamp’s photograph while the other is hidden behind bushes.

Significantly, Duchamp may well be the first and only great artist ever to visit the impressive region of Lavaux who did not turn to the lake and the mountains as a source of inspiration, as did his famous colleagues Gustave Courbet, Ferdinand Hodler or William Turner. Duchamp chose to devote himself to the other side, to look into the vineyards, to capture this fountainhead springing from the inner recesses of the earth—an orgasm that becomes an additional source for this magnificent lake and turns it into an overwhelming visual experience.

Duchamp’s subject matter is concealed by design, as it were, deliberately unspecific and yet still spectacular; it could occur anywhere in the world as it is not inescapably linked to this place. The artist has transformed a specifically local situation into one that is unspecific and universal, while nonetheless retaining a sense of the individual and the personal. Duchamp’s photograph also renders the sound that we hear long before catching sight of the waterfall through the trees. He captures what is hidden and, in his installation in Philadelphia, turns it into moving time, into the relentless, driving force of life. The wonderful is the center and, at the same time, the inconspicuous duplication of the naked woman with no pubic hair, holding a gas lamp in her hand. Our gaze is instantly arrested by the hairless vagina, an open cut that intrudes upon vision. But as soon as we pass beyond its visual blatancy, we discover the gash in nature, illuminated and set in motion by a special mechanism. It looks as if water were squirting out between the boulders and the pine trees and we do not perceive civilization although it is inescapably present.

We actually seem to hear the waterfall, smell the gushing waters (in fact, in 1946 the good citizens of Chexbres still used to empty their garbage into the waterfall) and feel the vibrant photographed bushes; we look through the two peepholes in the wooden door at the heaped up dead branches and we can almost hear the woman breathing, lying there spread-eagled, the leg bent outward to reveal her sex while wielding the gaslight in one hand to illuminate the waterfall. Ever since the research by Jennifer Cough-Cooper and Jacques Caumont we know that Marcel Duchamp took photos of the Forestay in 1946. However, nobody has answered the question why the artist chose just this waterfall and not any other. One would have to assume that only few Duchamp scholars have ever visited this unique location on Lake Geneva, and so most of them are bound to be unaware of the fact that the then Bellevue Hotel offers a direct view onto the township of La Tour-de-Peilz where Gustave Courbet spent the last years of his life. And Gustave Courbet created the famous painting L’Origine du monde which was the immediate source of inspiration for Duchamp’s Etant donnés installation.

Duchamp had bad-mouthed the artistic ideas of Gustave Courbet all his life, not least because in his own work he was pursuing similar interests both in subject matter and content—interests that we should look into more thoroughly in particular with regard to Etant donnés. And Gustave Courbet was not only the painter of that unambiguous portrayal of a woman’s sex but he also painted a number of waterfalls and fountainheads in his artistic career which by their composition, in works such as La Source (1862, Metropolitan Museum of Art, New York), he brought in direct relation to the female act. So it cannot be by accident that Marcel Duchamp in 1946 chose Le Forestay as the point of departure of his masterpiece, from where he could turn his gaze down on the death site of his great predecessor and at the same time, at one gaze, see two mountains (the Tour de Mayen and Tour d’Aï) bulging out skyward—in a most exposed and provocative way, like two female breasts. What’s more, the name La Tour-de-Peilz also evokes a vast array of associations—pet, paix, or paie (➝ fart, peace, wages)—which in the context of Duchamp’s thinking are highly interesting and add further significance to his choice of place. Similarly, another village near the waterfall is called Cully, which when compounded with the regular Swiss German diminutive means “little buttocks”.

Apart from all this, Duchamp made his photograph in all likeliness from a place next to a little wooden shed directly across from the waterfall. At the time the structure belonged to the Société de tir pistolet Chexbres, Palézieux et environs that was using it as a shooting range. What is interesting here is not only the parallel of “shooting a photograph” and “shooting a bullet” but also the detail that from there the Rifles of the town of Puidoux fired across the Forestay on the territory of the community of Chexbres. All these observations convey an entirely new turn to the contents and the meaning of Etant donnés. They allow not only to bring into play again the most important metaphorical preferences of Duchamp’s earlier pieces, they move this late work a lot closer to the retinal art of Gustave Courbet which the artist had wanted to overcome all his life. Stefan Banz

Fourty years ago the Philadelphia Museum of Art opened Duchamps Diorama Etant donnés for the public. Without any doubt this is the ideal time to discuss these new facts and source materials immediately and on the spot, in the magical ambiance of Lake Geneva. We will not only gain exciting new insights into Duchamp’s work of the century but also have the chance of seeing the value of the Lavaux scenery for art in general in a whole new light.

A book is planned to include the symposium papers and iconographic source material dealing with this subject. This book, in col- laboration with JRP|Ringier, will also contain a photographic documentation of the Forestay and its remarkable surroundings and of the exhibitions with its exhibited works.