Wexner Center for the Arts

Wexner Center for the Arts, Columbus

The exhibition features more than 50 works, including newly commissioned work. Following its presentation in Columbus, the show will travel to four major venues in the U.S. Bradford is best-known for large-scale abstract paintings made from a variety of collaged materials, including billboard paper, newsprint, carbon paper, and other papers layered together and then manipulated with nylon string, caulking, and sanding. 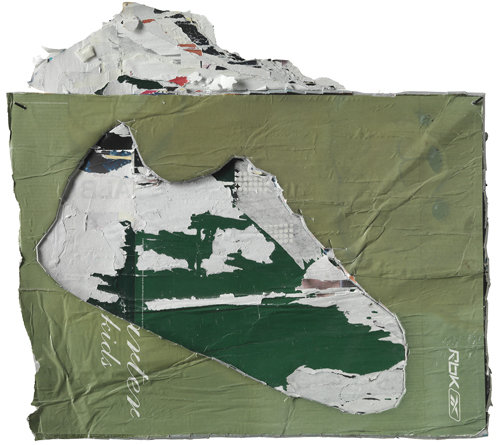 The Wexner Center will premiere its exhibition Mark Bradford, the first museum survey devoted to the work of the Los Angeles–based painter, one of the leading figures in contemporary American art. Organized by Wexner Center curator Christopher Bedford, the exhibition features more than 50 works in a variety of media spanning the years 2000–2010, including newly commissioned work. Following its presentation in Columbus, the show will travel to four major venues in the U.S.

A 2009 MacArthur Foundation "genius" award recipient, Bradford is best-known for large-scale abstract paintings made from a variety of collaged materials, including billboard paper, permanent-wave end papers, newsprint, carbon paper, and other papers layered together (or stripped apart) and then manipulated with nylon string, caulking, and sanding. Often incorporating references to the social conditions of a particular location, these works not only extend the possibilities of contemporary painting, they offer an unusual and highly individual examination of the economies (often defined by race, gender, and class) that structure urban society in the United States, and specifically in Leimert Park, the South Central Los Angeles neighborhood where the artist works.

In addition to providing a comprehensive account of Bradford's career to date with an emphasis on his work as a painter, the show will foreground new works created under the auspices of a Wexner Center Residency Award in Visual Arts. Among them is an environmental installation with sound entitled Pinocchio Is On Fire, which examines key moments in the history of the black community in Los Angeles from the early 1980s to the present. In addition, Bradford is creating two new works related to Mithra, his monumental, ark-like public art project installed in the Lower Ninth Ward of New Orleans for the Prospect.1 exhibition: a major new sculpture (titled Detail), which incorporates elements from Mithra, and a film titled Across Canal, which examines the conception, production, and reception of that work. Also commissioned for this show are a suite of new paintings and four "graphite drawings."

Notes Christopher Bedford, the exhibition's curator, "We're pleased to have been able to support the production of so much ambitious new work for this survey exhibition. In Mark's case specifically, placing heavy emphasis on the new in the context of an exhibition that also looks back at his work over the last 10 years is extremely important. It's also the most accurate way to capture the emphasis he himself places on pushing his practice forward each time he enters the studio."

The catalogue for the show, copublished by the Wexner Center and Yale University Press, will be the most comprehensive treatment of Bradford's work to date, featuring essays by Christopher Bedford, Robert Storr, Richard Shiff, Katy Siegel, and Hilton Als, as well as two interviews with the artist by Carol S. Eliel and Hamza Walker.

In partnership with leading interactive design firm Resource Interactive, the Wexner Center is developing a microsite http://www.pinocchioisonfire.org/ , slated to launch in mid-April, which will provide a rich online experience and offer a window into Bradford's process and background.

A Conversation with Mark Bradford and Aminah Robinson, moderated by Wexner Center Director Sherri Geldin, will be held Monday, May 3 at 7 pm.

Also on view in the center's lower lobby will be Philadelphia photographer Zoe Strauss's Works for Columbus, OH, a site-specific installation consisting of a panoramic image of clouds over the city, providing a background surface for several dozen of her smaller portraits and landscapes. Strauss will return on May 20 for a lecture and discussion of her own work.

Wexner Center for the Arts
The Ohio State University 1871 N. High St. Columbus
Gallery hours are Tuesday–Wednesday and Sunday 11 am–6 pm; Thursday–Saturday 11 am–8 pm; closed Mondays.
Admission to the galleries is $5; free for Wexner Center members, college students, and visitors 18 and under; free Thursdays from 4 to 8 pm and the first Sunday of the month.

stampa
permanent link
Wexner Center for the Arts
IN ARCHIVIO [14]