Based on a selection of extensive video installations from the eminent collection of the Kunsthalle Bremen, the earliest work in the exhibition stems from the video pioneer Peter Campus. Diana Thater transformed the space in the heart of the cube with the multiprojection artwork "Delphine". Yves Netzhammer has orchestrated a captivating cosmos of images using his animations and wall paintings. Additional exhibits include works of William Kentridge, Jon Kessler, as well as the young German artists Ulla von Brandenburg, Bjorn Melhus, Astrid Nippoldt, and Clemens von Wedemeyer. 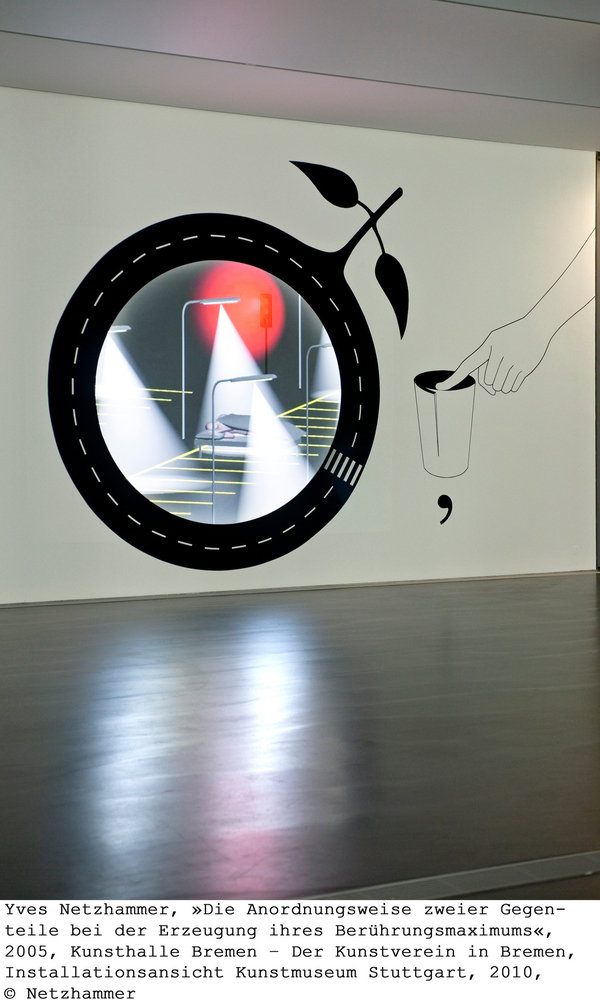 Nearly 50 year ago artists began to experiment with video cameras and monitors for the first time. Meanwhile contemporary art is inconceivable without the medium of video. Based on a selection of extensive video installations from the eminent collection of the Kunsthalle Bremen, the Kunstmuseum Stuttgart is organizing its first large special exhibition exclusively devoted to the options explored by the moving image. The earliest work in the exhibition stems from the video pioneer Peter Campus. Diana Thater, an American artist, transformed the core space in the heart of the cube with the multiprojection artwork "Delphine" into a two-level aquarium. Created especially for the exhibition in Stuttgart, the Swiss artist Yves Netzhammer has orchestrated a captivating and mysterious cosmos of images using his animations and wall paintings. Additional exhibits include works of the South-African draftsman William Kentridge, the American Jon Kessler, as well as the young German artists Ulla von Brandenburg, Bjørn Melhus, Astrid Nippoldt, and Clemens von Wedemeyer.

In contrast to the medium of film, with video technology artists can also broadcast recordings live. Peter Campus applied such a closed-circuit installation in "mem" (1974/75), thus turning the observer into a creative protagonist. Confronted by the schematic video image of ourselves, we corporeally experience the difference between reality and the media image.

The American artist Jon Kessler, a representative of the younger generation of artists, also explores closed-circuit technology, which is, in current times, mostly linked to video surveillance. Kessler brings clattering discs, reflecting foil, and dangling lamps to supposedly senselessly spin around themselves in the kinetic video sculpture "Random Acts of Senseless Violence, Part 1" (2007). Several cameras film the scene and simultaneously broadcast the flickering and obscure images on a monitor.
The surveillance cameras voyeuristically control the hyperventilating machinery and generate distorted images that depict no less than the duplication of a reality that has exhausted itself.

Bjørn Melhus’s video installation "Again & Again (The Borderer)" (1998) takes up the reproducibility of media images and of the human genome as its main theme. In the role of the modern homunculus, Melhus duplicates himself in eight monitors to the extent that the replicas turn against their own creator. In this way he reflects not only on the manipulability of a computer-generated world of imagery but also on the image of humankind that, in the course of the cult of the body and performance optimization, does not even seem to shy away from the use of cloning technology.

With shots of wild and domestic animals the American artist Diana Thater focuses on the difference between the natural and the artificial. In the case of her artwork "Delphine" of 1999, she worked for the first time with animals living in the wild and made fascinating underwater images of the marine mammals. In Thater’s eyes, dolphins are "models for conceiving fluidity", a notion she transposes into the field of architecture: The exhibition room expands with her multi-projections into a fluid pictorial space in which the viewer positively becomes immersed.

The Swiss artist Yves Netzhammer stages his video installation "Die Anordnungsweise zweier Gegenteile bei der Erzeugung ihres Berührungsmaximums" (2005) over an area of roughly 400 square meters. The very reduced and artificial imagery is characteristic for his wall paintings and animations, which give rise to feelings of alienation and unease. In a trance-like state, gravity and the materiality of things are neutralized, disconnected scenes merge associatively, or motifs crop up in alien contexts. A faceless jointed doll roams through sterile settings and attempts to approach its counterpart.

The South-African artist William Kentridge likewise became famous through his animations. He is represented in the exhibition by the film anamorphosis "What Will Come (has already come)" (2007) and the video "Felix in Exile" (1994). His exploration of memory processes and strategies of suppression within African society corresponds with the formal principles of the artwork: By continually drawing, erasing, and redrawing his motifs, the images constantly build on what existed before, and we can constantly see the persisting traces of the past.

Astrid Nippoldt’s video installation "Grutas" (2006) focuses on the subject of coming to terms with history and the legacy of political systems. It has been named after a Lithuanian sculpture park of a special kind: This park became the final home for dismantled Soviet propaganda sculptures from all over Lithuania after the Eastern Bloc collapsed. In images invoking a documentary, Nippoldt captures the ambivalent nature of this location, which resembles, in part, a memorial, a chamber of horrors, as well as an amusement park.

With his Film "Otjesd" (Engl. Departure, 2005), Clemens von Wedemeyer distinctly shows that East and West still have a long way to go before living together on an equal footing. In a forest in East Berlin, the artist recreates a Kafkaesque scene he witnessed at the German Consulate General in Moscow with a single, uncut camera shot: queues at counters and security checks, dodgy contractors responsible for travel formalities, people wandering around lost who are not allowed to cross the borders and subject to the arbitrary and demonstrative authority of two bureaucratic systems.

Ulla von Brandenburg’s video installation in three parts entitled "Der Brief" (2004) was inspired by the tableaux vivants which were popular in the 19th century. Different people group together, freezing for two-and-a-half minutes in theatrical poses around a figure reading a letter, after whom the work was given its title. They are thus evoking associations and narratives in the mind of the observer.

Showing ten exemplary approaches in video art, the exhibition "Simply Video" pursues the issues of perceiving what is part of us and what is alien to us, of the construction of reality and fiction, of past and present – issues that the artists articulate in individual and multi-facetted ways. The exhibition was made possible by "Noble Gäste", a project of the Kunsthalle Bremen, which has placed parts of its exceptional art collection at the Kunstmuseum Stuttgart’s disposal during renovation and construction work.