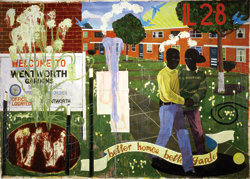 For Marshall, social responsibility means creating artworks that both celebrate and unravel the black experience in America. His Garden Projects is a series of vibrant urban scenes based on public housing projects on the South Side of Chicago and Watts, responding to the US government’s utopian, failed ideal of providing affordable housing to a growing population. The middle class living rooms in the Souvenir paintings of the late 1990s offer scenes made with a diversity of media and a certain meticulousness and restraint.

They represent aspects of the civil-rights struggles of the 1960s and include portraits of Malcolm X, Martin Luther King, Jr., John and Bobby Kennedy and less identifiable characters alongside inscriptions memorializing other heroes and victims of this historical movement. The more recent Vignettes present idyllic images of black couples in sumptuous romantic landscapes reminiscent of eighteenth century Rococo paintings, inserting the black figure into an historical narrative in which they have traditionally been absent. Marshall’s twenty-five year practice is characterized by historically informed explorations of the representation of the black figure in pictorial space, and an investigation of the critical pretensions of the fine art establishment in which he participates.

Fiona Tan - Rise and Fall
curated by Bruce Grenville
May 8 to September 6, 2010

Fiona Tan is internationally regarded for her films, videos and photographs and was highly acclaimed for her participation in the 2009 Venice Biennale’s Dutch Pavilion. Fiona Tan: Rise and Fall features video installations and photographic series produced by this Amsterdam-based artist during the past three years. This major exhibition is an unprecedented opportunity for North American audiences to view Tan’s powerful explorations of identity and belonging in a world increasingly shaped by global culture.

The exhibition marks a new trajectory for the artist and documents this important stage in Tan’s career. Although much of Tan’s earlier work focused on the use of found archival images, her recent projects involve the use of actors and location shooting. The works address her long-standing interest in the documentary image, both personal and public, and the role of memory and forgetting in the construction of identity. These ideas are represented in works that range in size and media, from framed photographs and drawings to monitor-scaled digital installations and theatrically-scaled projections.

An integral component of the exhibition is a new two-channel film installation commissioned by the Vancouver Art Gallery specifically for this exhibition. The new work, Rise and Fall, was filmed in Niagara Falls, Belgium and the Netherlands, constructing a narrative of isolation, loss and dislocation by using water as an evocative metaphor for the memories of a woman’s life.

Supported by the Mondriaan Foundation, Amsterdam.