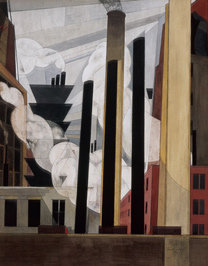 The National Gallery of Art, Washington, will present for the first time worldwide 120 stunning German watercolors and drawings from the Wolfgang Ratjen Collection—one of the finest private European holdings of old master drawings. On view in the Gallery's West Building from May 16 to November 28, 2010, German Master Drawings from the Wolfgang Ratjen Collection, 1580–1900 will include rare and influential examples of German works on paper encompassing 16th-century mannerism, the 17th-century baroque, the 18th-century rococo, early 19th-century romanticism, and late 19th-century realism.

In 2007, the National Gallery of Art acquired 185 German and Italian works from the Ratjen Collection with the help of a dozen generous private donors as well as the Paul Mellon Fund and the Patrons' Permanent Fund.

"Throughout its history the National Gallery of Art has collected the justly famous drawings by German artists of the late Middle Ages through the Renaissance, and major works by the German expressionists," said Earl A. Powell III, director, National Gallery of Art. "In recent decades we have also attempted to build a bridge, to include outstanding German drawings that epitomize the styles and centuries of art between those two fields. With the acquisition of the Ratjen Collection, the Gallery now possesses the most thorough portrayal of the best in German draftsmanship outside Europe. The Gallery is indebted to the vision and generosity of its donors, who made very special contributions to acquire this renowned collection."

Works included in the exhibition are by artists from Germany and German-speaking areas of Europe, German-born artists practicing abroad, and artists born in other areas who spent time working in Germany and adapting to German culture.

Organized chronologically throughout five rooms, the exhibition begins with outstanding early works by three of the most notable German mannerists: Friedrich Sustris (c. 1540–1599), living primarily in Munich; Hans von Aachen (1552–1615), working at the court of the Holy Roman Emperor Rudolf II in Prague; and Hans Rottenhammer (1564/1565–1625), living in Venice and Augsburg.

Sustris' sophisticated drawing An Elaborate Altar with the Resurrection of Christ and the Martyrdom of Saint Andrew (1570/1580) is one of the earliest Bavarian responses to Italian mannerist altars. Von Aachen's The Madonna Enthroned with Saint John the Baptist and Saint John the Evangelist (1589), a sacra conversazione (devotional scene) produced soon after his return from Venice, was a favored Venetian motif at the time. Rottenhammer's colorful watercolor Minerva and the Muses (c. 1610) is directly inspired by Tintoretto, whose work he studied in Venice.

From the baroque period, Adam Elsheimer (1578–1610), a favorite artist of both Rubens and Rembrandt, is represented by an extremely rare atmospheric gouache—Ceres Changes Stellio into a Lizard (1605/1608)—perhaps his finest work in the United States.

Around the turn of the 18th century, German artists developed a particular fondness for nature, as represented here by an extensive series of luminous drawings and watercolors. Highlights include five evocative landscape watercolors by Johann Georg von Dillis (1759–1841) as well as Caspar David Friedrich's (1774–1840) romantic masterpiece New Moon above the Riesengebirge Mountains (1810 or 1828/1835).

All major movements of the 19th century are represented, from romanticism to realism to impressionism and symbolism. A stunning group of realist drawings and pastels by Hans Thoma (1839–1924), Max Liebermann (1847–1935), and Adolph Menzel (1815–1905) includes his famously bold but sensitive pastel portrait of his sister, Emilie (1851).

Wolfgang Ratjen (1943–1997), one of the most discerning collectors of the 20th century, was born to a banking family in Berlin, but moved as an infant with his parents to Liechtenstein. While at university, his love for classical music was followed by a passion for old master drawings. That passion, he once said with his characteristic humor, was "the most wonderful disease you can imagine," and it led him to become a professional collector. Ratjen pursued art-historical knowledge as well as connoisseurship, and with remarkable objectivity refined his collection throughout his life, frequently upgrading or replacing works with better ones. After Ratjen's sudden death in 1997, the collection was cared for by the Ratjen Foundation in Liechtenstein, from which the Gallery acquired it in 2007.

German Master Drawings from the National Gallery of Art, 1580–1900

Prints, Drawings, and Illustrated Books at the National Gallery of Art

The National Gallery's collection of prints, drawings, and illustrated books in the department of prints and drawings consists of more than 97,000 Western European and American works on paper and vellum, dating from the 11th century to the present day. Because works on paper are highly susceptible to overexposure to light, they can be exhibited only for short periods. For that reason, the Gallery maintains a schedule of changing exhibitions drawn from its own collection or on loan from other institutions and private individuals. Drawings and prints not on view may be seen by appointment by calling (202) 842-6380.

The exhibition curator is Andrew Robison, Senior Curator of Prints and Drawings, National Gallery of Art.

Published by the National Gallery of Art in association with Paul Holberton publishing, London, a fully illustrated catalogue includes essays and comprehensive entries by international scholars, including Peter Prange, Robison, and Hinrich Sieveking. The 332-page hardcover catalogue includes 193 color and 22 black-and-white illustrations and will be available for purchase in the Gallery Shops in May.

One of the finest, most selective private collections of works by the first wave of American modernists will premiere at the National Gallery of Art, East Building, from May 16, 2010, through January 2, 2011. American Modernism: The Shein Collection presents 20 masterpieces by Patrick Henry Bruce, Stuart Davis, Charles Demuth, Arthur Dove, Marcel Duchamp, Marsden Hartley, John Marin, Georgia O'Keeffe, Man Ray, Charles Sheeler, and other renowned artists. The collection demonstrates the importance of the early American modernists in the development of the avant-garde in the United States and Europe during the 20th century.

In 2008 and 2009, the Gallery received three gifts from Edward and Deborah Shein: John Storrs' Auto Tower, Industrial Forms (c. 1922), Marcel Duchamp's Fresh Widow (1920/1964), and John Marin's The Written Sea (1952). The Sheins intend to continue making gifts of important works from their collection with their ultimate goal of giving all 20 of their masterworks to the Gallery.

"The Sheins have succeeded in building a collection that offers a remarkably full and nuanced account of the first avant-garde in the United States," said Earl A. Powell III, director, National Gallery of Art. "Their commitment to the Gallery and its public mission to collect, preserve, exhibit, and educate is evident not only in their willingness to live without their entire collection for more than six months, but also through their gifts and promised gifts. We are tremendously grateful to the Sheins for contributing in such an intelligent and substantive way to our programs."

The exhibition is the latest in a series at the Gallery devoted to American modernism, including one-person shows of the work of Georgia O'Keeffe (1987), John Marin (1990), Paul Strand (1990), and Charles Sheeler (2006), as well as ambitious overviews of the period, Modern Art in America: Alfred Stieglitz and His New York Galleries (2001) and Twentieth-Century American Art: The Ebsworth Collection (2000).

Distinguished by its rigorous focus on leading artists from the first generation of American modernists as well as the extraordinarily high quality of the paintings, sculptures, and drawings it contains, the Shein Collection is one of the nation's foremost private collections of early American modernist works.

The trio of artists most consistently championed by the photographer Alfred Stieglitz—Arthur Dove, John Marin, and Georgia O'Keeffe—is also represented, respectively, by their classic masterpieces Sunrise I (1936), Sunset (1922), and Dark Iris No. 2 (1927). In addition, helping to bridge the history of this generation of American artists before and after World War II are the late masterworks The Written Sea (1952) by Marin, Composition around White (1959) by Charles Sheeler, Unfinished Business (1962) by Stuart Davis, and Marcel Duchamp's 1964 version of Fresh Widow. Completing the collection are important paintings and drawings by Arthur B. Davies, Edwin Dickinson, Preston Dickinson, Stanton Macdonald-Wright, Alfred Maurer, Joseph Stella, and Max Weber.

Image: Charles Demuth, End of the Parade: Coatesville, Pa., 1920 tempera and pencil on board. Collection of Deborah and Ed Shein