Neon Paradise. His photographs depict the urban landscape and concrete jungles in metropolises across Southeast Asia. "Neon Tigers" illustrates the infrastructure boom and high rises of the megacities, while "Paradise Now" shows the intermingling of nature and the man-made neon luminescence in a subtle and startling balance of lush greenery and neon phosphorescence. 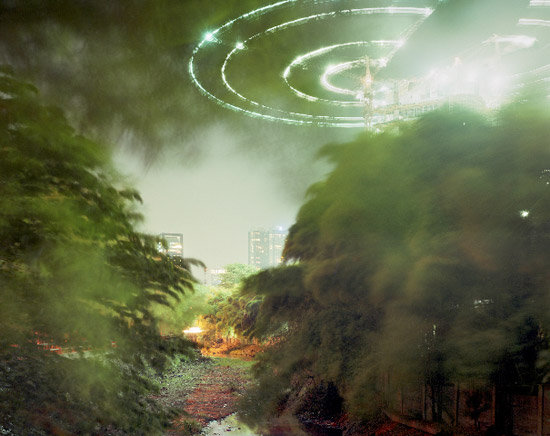 m97 Gallery is pleased to present "Neon Paradise" a solo exhibition of photography works by German artist Peter Bialobrzeski.
The "Neon Paradise" exhibition showcases for the first time in Shanghai works from Bialobrzeski's award-winning "Neon Tigers" series, as well as works from his most recent "Paradise Now" series. Bialobrzeski's photographs depict the urban landscape and concrete jungles in metropolises across Southeast Asia. Spanning nearly a decade, these two bodies of work are the perfect juxtapositions and bookends to Bialobrzeski's work in Asia. "Neon Tigers" illustrates the infrastructure boom and high rises of Asia's megacities, while "Paradise Now" shows the intermingling of nature and the man-made neon luminescence in a subtle and startling balance of lush greenery and neon phosphorescence.

Peter Bialobrzeski's works have been exhibited around the world from New York to Hamburg to Mumbai and are in numerous public and private collections. "Neon Paradise" at m97 Gallery will be Bialobrzeski's first exhibition in Shanghai.

Peter Bialobrzeski (German, b. 1961) studied Politics and Sociology before he became a photographer. He travelled extensively in Asia before he went back to College in Essen and London to do a course in Photography and Editorial design. After having worked as a photojournalist for almost 15 years and published his work worldwide, Peter started to focus more on personal projects. He interprets his work neither as documentary nor as art but defines it as Cultural Practice. In the last ten years, six monographs have been published about his works, "XXXholy" (2000), "NEONTIGERS" (2004), "HEIMAT" (2005), and more recently "Lost in Transition" (2007), "Case Study Homes" (2007) and "Paradise Now" (2009). His work has been exhibited in Europe, the United States, Asia, Africa, Australia and New Zealand. He has won numerous awards including the prestigious World Press Photo Award in 2003 for his work about Asian Megacities and again in 2010 for his "Paradise Now" series. He also received the prestigious Otto Steinert Award in Germany in 2005. Other honors include being a member of the World Press Photo jury in 2007 and 2009 and a member of the Jury of the Fuji European Press awards in 2001 and 2002.

The exhibition is supported in part by the Goethe Institute in Shanghai.