In cooperation with the Fondation Beyeler, the exhibition features 30 works that reflect the wide thematic variety of the French artist's oeuvre: from his "jungle paintings" that characterized his final years to the views of Paris and its environs, figures, portraits, allegories and folk scenes. The artist approached these themes in a manner that was both unusual and shocking in his day. He defined the picture space by staggering pictorial elements from background to foreground, a method later adopted by the Cubists. 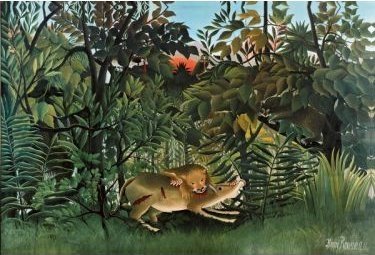 One hundred years after his death, the Guggenheim Museum Bilbao pays tribute to Henri Rousseau with an exhibition that underscores this French artist's relevance as one of the primary forerunners of modern art. His importance went far beyond the clichéd conception, which still persists in certain circles, of the artist as "naïve". Henri Rousseau revolutionized the painting of his time by using novel techniques to construct a visual universe, techniques that made a lasting impression on the young artists of his day.

Organized by the Guggenheim Museum Bilbao in cooperation with the Fondation Beyeler, the exhibition Henri Rousseau features approximately thirty works that reflect the wide thematic variety of the French artist's oeuvre: from his well-known "jungle paintings" that characterized his final years to the views of Paris and its environs, figures, portraits, allegories and folk scenes. The artist approached these varied themes in a manner that was both unusual and shocking in his day.

His unique working method of transferring individual motifs such as leaves and trees, figures and entire compositional schemes from picture to picture is revealed in the exhibition's choice of paintings. Rousseau defined the picture space by staggering pictorial elements from background to foreground, a method that would later be adopted by the Cubists. This additive (or built-up) pictorial structure, in the form of painted collage, anticipated the autonomy of the picture plane that would become characteristic of Modernism. Younger artists, such as Pablo Picasso and Fernand Léger, both of who admired and collected his work, were captivated by his technique.

Initially, Rousseau painted mostly small-format pictures depicting the French suburbs and the surrounding countryside of his immediate environment. In these landscapes, wilderness is represented by dense wooded areas that the artist used to separate the visual realm by means of either a fence or behind a fortification wall, as in House on the Outskirts of Paris (1905, Carnegie Museum of Art). Gradually, he moved away from this rationally organized civilization toward an unorganized, wild depiction of nature. This passage from the well ordered and familiar to the unknown and alien defined his later work as can be seen in Landscape (1905–10, Philadelphia Museum of Art).

In his famous jungle paintings, Rousseau, who never actually set foot in a jungle, finally succeeded in leaving the sphere of domestication behind for his imaginary wilderness. Now working in a significantly larger format, Rousseau lent these invented landscapes a compelling visual reality. The culmination of the exhibition is formed by a significant assembly of Rousseau's renowned jungle pictures. Of special mention is the monumental painting Le lion, ayant faim, se jette sur l'antilope (1895/1905, Beyeler Foundation) included on the occasion of Rousseau's first appearance at the Salon d'Automne in Paris in 1905. In March 1906, art dealer and collector Ambroise Vollard acquired the sensational painting—the first Rousseau ever to enter the art trade.

In addition, the exhibition illustrates Rousseau's well-documented interest in photography for source material. A few of his compositions, such as La carriole du père Junier (1908, Musée l'Orangerie) were definitively based on photographs. In the course of transferring the photographic image to the canvas, he created an entirely new visual world, arranging its elements into an another image layer by layer in front of his imaginary camera lens. Yet for all his reliance on photographic realism, Rousseau always strove to keep the depicted world at a distance, as seen in La noce (1904-05, Musée l'Orangerie) whose distortions of scale and proportions with respect to the original model are immediately obvious.

Rousseau introduced into his paintings a new approach to imaginative vision. His perception of reality was based primarily on observation, imitation and transformation of the visible. In this way, he taught modern artists how the unknown could be constructed using the building blocks of the known.