About Belief brings together works by seven artists which in different ways explore ideas of belief, from belief in oneself to a testing of the viewers' willingness to believe what various works propose. 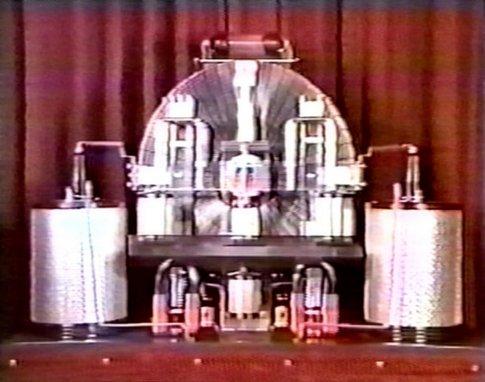 How we deal with ourselves and with what we encounter on our journey through life depends crucially on what we believe about ourselves, about our world, and about the worlds of others.
CiarÃ¡n Benson

>From the emergence of the extreme right in Europe to the increasing global impact of religious fanaticism, belief systems continue to have a profound influence on our perceptions of ourselves and the wider world. About Belief brings together works by seven artists which in different ways explore ideas of belief, from belief in oneself to a testing of the viewers' willingness to believe what various works propose. The exhibition is the sixth annual collaboration between Goldsmiths College's MA in Creative Curating and the South London Gallery. It is curated by Simon Gould, Chris Huang, Jennifer Mojica, Alona Pardo, Sandra Ross and Vita Zaman.

In the late Autumn of 1980 ArtÃ¼ras Raila saw constellations of lights moving in strange trajectories in the sky above the town of Telsiai in Lithuania. Convinced that he had seen UFOs, the artist returned to the same place 22 years later in order to recreate the memory in the video Primitive Sky (2002).

Sarah Tripp's video Testatika (2001) uses the format of documentary to explore the deeply-held belief of a close knit Christian community in Switzerland in the existence of an energy-giving perpetual motion machine.

Joost Conijn's video Airplane (2000) records the artist's endeavour to build a plane from junk and spare parts which, against all the odds, he succeeds in flying across the Moroccan desert.

In his on-going text based works, Jonathan Monk tests the viewers' faith in his readiness to keep his word by inviting them to meet him at various locations in the future. Meeting No.41 (2002) will be shown for the first time in About Belief.

Scorpio Rising 2 (1997) by Mark Dean establishes a dialogue between the sense of community resulting in shared religious belief and the clan-like tendencies of Hells Angels by juxtaposing the films Hells Angels on Wheels by Richard Rush and Pasolini's The Gospel According to St. Matthew.

Milica Tomic's powerful video work shows the artist bearing the consequences of lying about her national identity, highlighting the possible dangers of declaring such allegiances.

Marko Maetamm's online project Me Supernatural (2002) offers an often humorous account of an imagined dialogue between God and the devil
(http://www.livonia.ee/maetamm).

About Belief is the first Goldsmiths/SLG Collaboration to have been selected by a panel of judges. Barbara Steveni, artist and arts activist; David Beech, artist, writer and critic and Donna Lynas, Curator at the South London Gallery selected this years project.

About Belief has been generously funded by Spero Communications Ltd, a leading exponent of cultural and affinity marketing with a long-term commitment to supporting young creators and exposing their work to new audiences.

Additional support for the exhibition has been provided by the British Council, the Royal Netherlands Embassy, Victoria Park Plaza Hotel, the Film & Video Umbrella and Asahi Beer.

Throughout the exhibition there will be a series of FREE informal talks every Thursday evening at 7pm. Please Call the gallery on 020 7703 6120 for more details.