The 3rd edition of the festival presents works about Poland's current reflection on history, that shed a critical light on the present capitalist times. With a live trailer on the last part of Yael Bartana's film trilogy about Polish-Jewish relations that illustrate the universal language of political propaganda. The Raqs Media Collective have been commissioned to put together a video installation made up of sound, text and archive material. 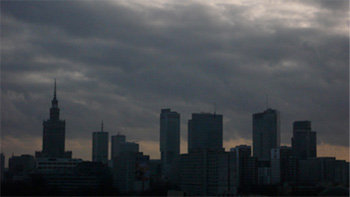 In the past few years the Polish self-understanding has radically changed. Joining the EU has altered the face of society with economic growth on the one hand, and with the beginning of the crisis on the other. Not everything that has been promised is being realised. There is now a stronger will to come to terms with recent history. Many current theatrical works focus on the years of the Second World War, the crimes, anti-Semitism on the Polish side, the collaboration with the Germans. Reflecting about one’s own history does not change anything about the pursuit of happiness which after the end of communism it seems can only be found in capitalism. However capitalism as a system without an alternative has already brought forth a new critical Left which excels in making use of the media.
For our third edition of Polski Express we have invited works that are about Poland’s current reflection on history, works that shed a critical light on the present capitalist times, works that are in search of their own language. In Kaspar (26 until 28 May) acclaimed young director Barbara Wysocka explores the boundaries of language. Kaspar Hauser becomes a symbol for language as a prison, a prison from which there is no escape. There does not seem to be an alternative to the capitalist system, same as we are caught up in language – there is not meta-language! Harakiri Farmers, a young group from Cracow working in an interdisciplinary way, is in with a similar approach. In We Are Oh So Lucky! (28 and 29 May) they create a hybrid theatrical language that treats motion, image and word in an equal manner. "We are – oh – so lucky", we have been lucky, we got away with it. The character of Lucky in "Waiting for Godot" is a playful reference in text, image and motion, opening up perspectives on the construction of reality.

With Samsara Disco (25 and 27 May) Agnieska Olsten presents a new interpretation of Chekhov’s "Ivanov", based on Victor Pelevin’s "The Life of Insects". Samsara as the eternal cycle of becoming and fading away, where greed, hatred and blindness are the driving force that has to be overcome, meets disco as a place of celebrating where pure profanity is being commemorated. After communism the only fulfilment seems to lie in consumism. Is enlightenment possible at all? And where do the emotions come from? They have to be searched outside of the appearance, as everyone here wants to move in the direction of the light, but ends up in darkness all the time.

To start the Festival on 25 May we will show a live trailer on the third and last part of Yael Bartana’s film trilogy about Polish-Jewish relations, based on "Mary Koszmary" (Nightmares) and "Mur i wieża" (Wall and Tower). We will be strong in our weakness will present a congress of Jewish Renaissance in Poland. Bartana uses the visual and linguistic qualities of the assembly of a new political movement in order to illustrate the universal language of political propaganda – a repertoire of gestures, rhetoric and symbols that are not linked to a particular time or ideology. Thus history can be interpreted as a form of collective psycho-therapy where national demons are being awakened and brought to the light of day.

The Indian artists, documentary filmmakers, networkers and specialists for urban questions Monica Narula, Jeebesh Bagchi and Shuddhabrata Sengupta from the Raqs Media Collective have been commissioned by the Goethe Insitute to put together in three metropolises a video installation made up of sound, text and archive material with the title "The Capital of Accumulation" (25 May until 04 July). With a narrative structure following Rosa Luxemburg’s "The Accumulation of Capitals" Raqs develops a common economic, political, social and urban history that could have occured like this in 20th century Berlin, Mumbai or Warsaw: Stories about the promise for a new beginning, about failing and about passages.

Images determine the collective, social memory and form the way we see history. Just think of the photographic snap-shots of Willy Brandt’s genuflection in Warsaw (1970), Hanns-Martin Schleyer being held hostage by the RAF (1977), or the ‘Gladbeck hostage crisis’ (1988). We remember images that have been elected to become media icons. For the realisation of the video installation Serie Deutschland (26 until 29, 31 May and 01 June) Hofmann&Lindholm have invited citizens from different cities to re-enact historical images of reference at the original sites in front of a camera. Since 2008 the series is constantly being complemented by further visual motives.

In a live installation and under the title of reverse fast forward, along with participating artists and special guests, the curatorial team of the KNOT presents first results on 27 May.
The KNOT is a camp for research and imagination about the future of public and urban spaces. Before the lecture the camp and its crew will already have left the Kulturforum behind and are currently staying at Tempelhof airfield.
http://www.knotland.net

Furthermore we will show Das gelobte Land (31 May and 01 June) by Nobel Prize Winner Wladyslaw Reymont, directed by Jan Klata. Reymont has set this novel about the 19th century in Łódź, the city of textile industry that was characterised by Polish, Jewish and German people. In 1974 Andzrej Wajda came up with an equally ingenious film version of the matter. Klata’s work is not only based on these two narratives, he also updates the topic radically in referring to OIiver Stone’s film "Wall Street" from 1987, from which the play’s slogan "Greed Is Good!" was taken. "Greed is good", even in times of globally organized capitalism – this is the motto of the play’s protagonists who try ruthlessly to make profit out of this situation.

In six evening lectures between March and June 2010 the question of happiness in an urban context will be explored. Cultural anthropologists, urban scholars and architects will highlight the ideology of the pursuit of happiness and its real effects. With the example of individual cities (Warsaw, Berlin, Naples, Bucharest, Las Vergas, Mumbai) interrelations between migration, tourism, urban planning and architecture will become visible. The promises of the city go beyond private life and structure the society. Hence they are a key to the understanding of the way we live together.
Concept: Stefanie Peters, with among others Joanna Tokarska-Bakir on 31 May and Norman M. Klein on 01 June.

Preview June:
Krzysztof Warlikowski inaugurated his own theatre in Warsaw with (A)pollonia (04 and 05 June), a production about sacrificing oneself and others since ancient times. The model for the title is the story of Apolonia Machczynska, who during Second World War was hiding 25 Jewish children from the Gestapo and who turned herself over to them instead of her father. Almost allegorically Warlikowski stages this character, somewhere in-between ancient tragedy – Alcestis – and contemporary literature – Elizabeth Costello by J.M. Coetzee. Only when reflecting and acknowledging the past, even crimes of the past, can a new image come into being.

"Polski Express III" is part of the project "The Promised City", a cultural initiative between Berlin and Warsaw with co-operations in Mumbai and Bucharest: Artists, curators, persons engaged in the cultural sector and scholars from Germany, Poland, India and Romania develop numerous new artistic productions that deal with the dreams, illusions and the promises for happiness in modern metropolises in an interdisciplinary way.
http://www.promised-city.org

Polski Express III is a production by HAU, and is being sponsored by the Hauptstadtkulturfonds, the Foundation for German-Polish Co-operation and the Adam-Mickiewicz Institute.

Yael Bartana
"We will be strong in our weakness. Keynotes from the First Congress of the Jewish Renaissance Movement in Poland"
Performance: 25 May, 6:30pm 2010, HAU 1