150 galleries from 29 countries presenting some of the globe's top international artists. The official talks program Backroom Conversations, organised by Asia Art Archive, will bring leading figures from the museum world with panelists including speakers from such renowned institutions as MoMA (New York), Guggenheim (New York), and MoCA (Tokyo) who will shed light on the latest developments in the art world. 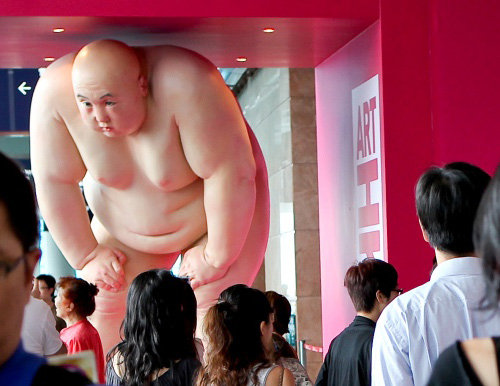 With over 150 galleries from 29 countries presenting some of the globe’s top international artists and a diverse line up of coinciding events, ART HK 10: Hong Kong International Art Fair will ignite Hong Kong’s art scene both within and beyond the walls of the Hong Kong Convention and Exhibition Centre (HKCEC) from 27-30 May 2010. This year, with the support of new lead sponsor Deutsche Bank, ART HK 10 will feature prominent Asian talents who will take centre stage alongside top international stars, while a series of new initiatives will bring the public one step closer to the artists.
One such programme will be Stand Talks, where 29 international artists whose work is on show will give visitors first-hand insight into their motivations and experiences. Those participating include Aya Takano of Emmanuel Perrotin, Johannes Weiss of Galerie Lena Brüning, and Penny Byrne of Sullivan + Strumpf.

The official talks program Backroom Conversations, organised by Asia Art Archive, will bring leading figures from the museum world with panelists including speakers from such renowned institutions as MoMA (New York), Guggenheim (New York), and MoCA (Tokyo) who will shed light on the latest developments in the art world. This year’s Fair sees the return of the debate by Intelligence Squared Asia, which seeks to provoke controversy with the motion: You don’t need great skill to be a great artist. Speakers include Turner Prize winning artist Antony Gormley, Tim Marlow, Director of Exhibitions at White Cube, Hans Ulrich Obrist, co- director of the Serpentine Gallery and the most powerful person in the international art world, according to Art Review magazine, and Sarah Thornton, the best selling author.

ART HK continues to push boundaries with displays of experimental art, in addition to video and installation works, that bring art off the wall, diversifying viewer experiences. The work of emerging Japanese artist, Noriko Yamaguchi, is one example. Exploring technology, mythology and feminism through bodily transformation and endurance, Yamaguchi camouflages her body with a variety of striking materials to create a second skin, a visual spectacle sure to be a highlight of the Fair. Yamaguchi’s Keitai Girl performance will take place during the Vernissage in Hall 3 of the HKCEC at 8pm on Wednesday 26 May. “Deutsche Bank has a deep involvement with the arts globally,” Michael West, Head of Communications in Asia Pacific for Deutsche Bank explained. “Hong Kong has been a regional hub for Deutsche Bank for over 50 years and is increasingly at the centre of the burgeoning Asian arts scene. Our sponsorship of ART HK is a logical and exciting addition to our global art programme.”
“The continued growth in involvement of high profile artists and exhibitors participating in the Fair has resulted in ART HK transcending beyond the walls of the HKCEC to drive the development of Hong Kong as an art epicenter,” added Magnus Renfrew, Fair Director.

The galleries of ART HK 10 will present their strongest work to date, and the Fair will feature more than ten solo shows of artists from all over the world, including a large contingent from Mainland China. Particularly of note will be the solo show of Liu Ye at Sperone Westwater, whose Bright Road sold for US$2.45 million at Sotheby’s on 5 April 2010, setting a record for the artist while exceeding the pre-auction estimate three-fold. The artist will showcase works at ART HK such as Teresa Teng and J. With Glasses, which portray his iconic, contemplative woman centrally placed against saturated, monochromatic backgrounds.
A compelling selection of renowned Japanese artists will also be on show, including Yoshitomo Nara at Marianne Boesky Gallery, who leads the generation of Japanese “New Pop” artists that rose to prominence in the 1990s. Returning for a second year to the show, Nara will be showcasing works such as Rock ‘n Roll the Roll, composed of acrylic on wood, among other pieces that exemplify his work as a reflection of the memory of childhood through the use of images of seemingly innocent children and pets.

Continuing the representation of Asian solo artists at the Fair will be Indian artist Minam Apang of Chatterjee & Lal and Pakistani artist Shahzia Sikander of Pilar Corrias Gallery who will both present solo exhibitions as participants in SCMP | ART FUTURES.
Israeli artists Gideon Rubin of Rokeby and Aya Ben Ron of AANDO FINE ART will also join the Fair this year with solo exhibitions.
Glasgow artist Jim Lambie from The Modern Institute and Australian artist Susan Norrie of Mori Gallery are among the top international artists to watch at ART HK, alongside Damien Hirst, who will present a solo exhibition at White Cube’s special installation space at the Fair.

Hong Kong will draw attention from the global art community as a critical mass of activities take place at the time of the Fair. ART HK will coincide with the city’s major auctions and run concurrently with exhibitions at key art spaces in the city, including exhibitions by both Vito Acconci and Ai Weiwei at Para/Site Art Space, a non-profit art organisation in the centre of Hong Kong that exhibits both local and international contemporary art. The first exhibition in Hong Kong by New York based, Taiwanese artist, Lee Mingwei will also take place during ART HK 10 at Osage Gallery.

Also new in 2010 is the Fair’s collaboration with 1a space, an arts education organisation that will be ‘educating the educators’ by providing training to teachers so they can share art knowledge with their students. Complimentary activity packs for 5-14 year olds will be distributed by 1a space at the Fair.

SCMP | ART FUTURES, a program dedicated to exhibiting the work of emerging artists from galleries less than five years old, will be back in 2010 after its debut last year. Among the judges will be Hans Ulrich Obrist, who will join a panel in awarding a prize to the most promising emerging artist on show. The winner of best artist in SCMP | ART FUTURES will receive a cash prize worth US$2000 and will be invited to have their work featured on the front cover for the South China Morning Post’s Sunday Post Magazine.

Tickets to the Intelligence Squared Asia debate are HK$300 including admission to ART HK 10. The event will take place from 6 to 8pm on 28 May, and tickets are available through http://www.hkticketing.com