In his sculptures and drawings Lerooy conjures up a fantastical world that takes beholders to the intimate frontiers of humanity, probing the dark areas and the flaws that define man's mental and physical limits. Bresson uses a technique that strongly recalls classical painting in meticulous compositions which depict modern scenes of urban violence in the manner of historical scenes. 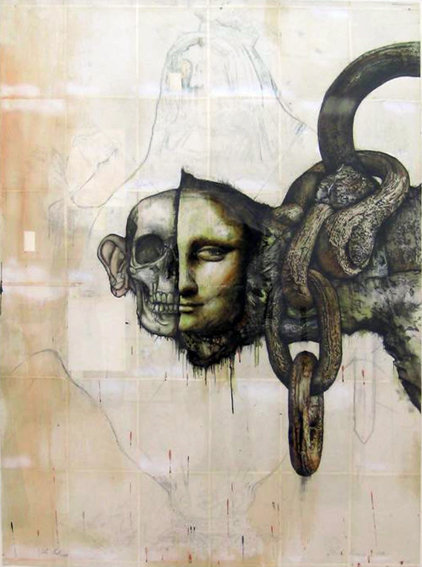 Thomas Lerooy
The garden of exile

In his sculptures and drawings Lerooy (born Roeselare, 1981) conjures up a fantastical world that takes beholders to the intimate frontiers of humanity, probing the dark areas and the flaws that define man’s mental and physical limits. Each work evokes metaphysical questions as the artist offers his richly ironic explorations of such themes as creation, desire and death.

Lerooy’s work teems with strange creatures and symbols of death. His drawings celebrate an aesthetic tradition reaching back to Leonardo da Vinci and Michelangelo, but also recall the vanitas paintings of the 17th century, mixed in with the grotesque and macabre humour of more recent artists like James Ensor, Félicien Rops and Antoine Wiertz. Just as Ensor painted self-portraits with a skull, and Rops showed prostitutes copulating with skeletons, so Lerooy transforms the head of the Mona Lisa into a skull, and his impassive faces are furrowed by erotic fault lines or holes in the frontal cortex threatening to swallow up the little bit of brain that remains.

The drawings and sculptures presented here show the artist exploring the paths and questions of creativity with his characteristic dark humour and sense of the absurd. Lerooy sees the artist as a mediator between man and his inner world, a world that in his works becomes luxuriant and manifests itself by overflowing the structure of the body.

Nathalie Obadia is delighted to organise the first solo show at the gallery by Guillaume Bresson (born Toulouse, 1982), an artist who graduated in 2007 from the Ecole Nationale Supérieure des Beaux-Arts in Paris, where he lives and works.

Bresson uses a technique that strongly recalls classical painting in meticulous compositions which depict modern scenes of urban violence in the manner of historical scenes. He thus draws on mythological tropes and the tradition of history painting (from Poussin to Caravaggio) to convey a reality that is resolutely contemporary in its style and in its references to such realities as urban rioting and street fighting. His paintings are made using photographs that are carefully posed and worked out with models and actors. They turn these modern youngsters into mythological heroes, with the colours and brands of their trainers and sneakers becoming the heraldic insignia of the clans they represent.

The realism and detail of these figures, combined with the deliberately composed setting, work to create a convincing if not realistic fiction articulated around complex compositional structures. In this strongly contrasting environment almost limited to two simple tones, silhouettes emerge from darkness and their bodies perform a choreography that takes shape in the middle of car parks, basements and housing projects.

Guillaume Bresson will feature in Dynasty (June-September 2010), an exhibition focusing on the new generation of French artists co-organised by the Palais de Tokyo and the Musée d’Art Moderne de la Ville de Paris.