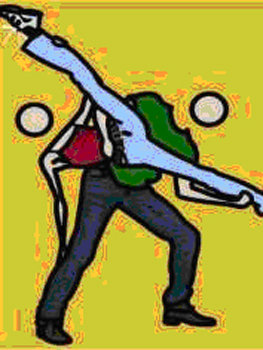 Half the reason for making an exhibition is simply to get a chance to see your own work properly. I’m always very grateful for this opportunity. When asked to make an exhibition I always travel to the town to see the space and begin the process of envisaging works in place. I am good at this. I can easily look at a blank wall, an empty room, and imagine my works in there. So I make a kind of mental slide show of all the works I have and works I am intending to make and jot down ideas on a scrap of paper.
Back in the studio I draw out the floor plan of the gallery on the computer and start to drop images of my work onto the plan. I try to make a kind of story, a narrative, using the accidents of the architecture. Sometimes I need to make new works, sometimes the opportunities give me the chance to try out entirely new things. Some works I would have made anyway, others are adapted and expanded for the space.

Where possible I try to push out from the actual showing space. The entrance lobby, the façade, the windows, the invite card and catalogue are all spaces to be used, places to extend the narrative.

Stories need chapters and this show is broken into 3 chapters, walking, portraits and dancing, with something of an overture to get it going. They say first impressions count and I have found that the first view is the key, so the first work in the show leads you from the street towards the main entrance. Thinking of Greek statues that tie into the architecture, Egyptian friezes that line the entrances to temples and the throng of strangers on any city street, the walking figures of the first LED sculpture on the balcony stride endlessly towards the exhibition. I borrow from many visual sources and refer to many others, contemporary signage as much as historical oil paintings or marble statues. The next two works use another common urban material, vinyl. Vinyl is the modern glass painting or stencil. It is flat and smooth and without human touch. It can be computer cut directly from my files. I use it a lot.

The first pictures were probably silhouettes. A shadow is almost a drawing itself and is so realistic it’s almost alive. They have always been a popular way of depicting people but became huge just before photography took over their role. They still have a lot of power and immediacy and I have shown here a couple of projects that the technique allows.

The first window vinyl is called Gallery Staff and depicts 5 members of a London gallery in changing poses (there are two other sets). Like an animated black and white film they take up alternate poses that tell different stories. They will be seen again once inside the museum. The other, larger work was created for a French museum as a kind of Advent calendar. They are a random group of people really, though the top line shows my family. Like the artists of the past I have used a reverse cut silhouette here, where the drawing is actually the negative space.

The same characters you saw outside appear in the lobby gently twisting in the wind. I love and hate the language of lobbies, of airports and shopping malls. It is omnipresent and huge but also ephemeral and ignorable, like music. Cropped closely and caught in motion, the various characters pass each other like you do the other visitors.

Gallery one plays out the walking theme that I have been working on for eight years now. People are in constant motion till they die, and perhaps most people that we see are walking. It is a way of knowing someone and can be an intimate knowledge. Using walking machines and video and computers I can draw the action of walking quite accurately and thus dispense with a lot of other detail while retaining the sense of realism. Motion can be evoked in many ways, some electronic and some just suggested.

The next 3 galleries cover some 13 years of drawing faces or portraits. Before faces I drew whole figures with circles for heads based on traffic and lavatory signs. I "zoomed in" on the face and came up with a language to describe all faces, but with just enough flexibility to differentiate all individuals. Like an identification programme (such as now exist, probably, on your phone) I found I could draw everyone and set about building a database of people I came across. Everyone has a great face. I would sit on the underground and imagine drawing the people opposite; each one seemed a better universal yet individual image. Perhaps in the end some people are at least easier to draw. The first room is the only older work I am showing here. Mark, a writer who was interviewing me, Elly, a Greek woman who works at my gallery in London, Ann, the sister of my assistant, Ashley, a collector who contacted me over the Internet.

The next two rooms show where I am now with portraits. I have used 17th- and 18th-century portraits and Japanese manga and anime extensively as both sources and references. Inkjet used to be a bit like photocopies and still sounds cheap, but I have a large machine in my studio that produces prints that look like oil paintings or silk-screens. LCD screens have a similar high resolution and combined with inbuilt computers allow me to make the paintings move, just enough to tell you it is real-time. Any one image, once drawn on the computer, allows me to make a range of works. On a different scale and behind a lenticular, three-dimensionalising screen, Clare (another gallery director) is a different work from when she is a framed inkjet on canvas. The object is as important as the image. Each of the 3 portrait galleries allows a different frame of the full-length silhouette project (please look up August Edouart). The last portraits are all drawn at the same time, of a mother and her two daughters. I made 9 paintings in all from the long sitting. I used manga cells that I own to suggest the poses that they took and dramatic lighting to evoke a sense of action. Vinyl has a limited colour range and could not manage these images, but it was just right for the Caterina project shown in the last room. I stick the vinyl to a sort of plastic canvas and stretch it like a regular painting on wooden bars. Caterina is a professional (Spanish) ballet dancer. I asked her to dance the same dance eight times in my studio, each time in a different outfit. This is the first time I used a video camera instead of a still camera and I think this accounts for the sense of movement in her poses. By pulling the image into three dimensions on sheet steel the flat drawing is able to stand up and dance across the floor.