The paradox of coherence 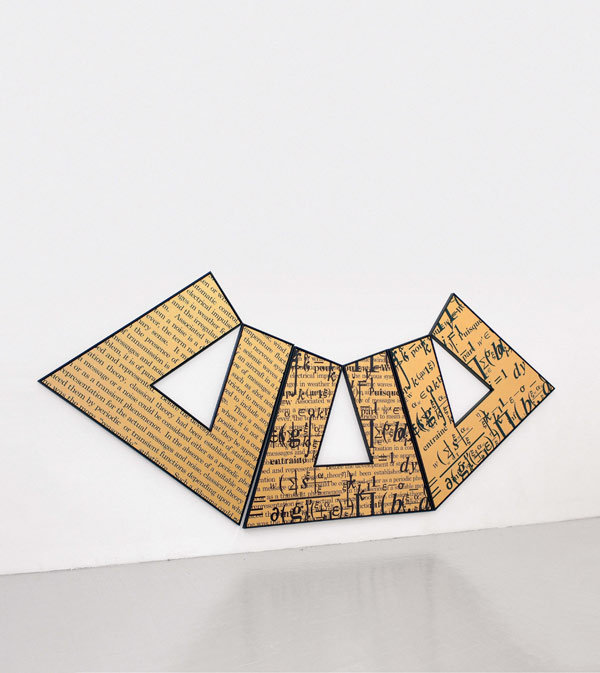 The first exhibition in a Spanish museum dedicated to Bernar Venet gathers 53 works and a representative selection of the conceptual work developed by Bernar Venet during different phases of his artistic career. Part of his work was characterized by the use of poor materials, new media such as the video, the sound recording and the photography in order to document performances and actions and the advent of unpredictable situations. Works such as Performance dans les détritus (Performance within the garbage) in 1961, Tas de Charbon (Pile of coal) in 1963 or his series Relief Cartón (Relief Carton) from 1963 to 1965 were characterized by the elimination of features such as color, form, etc., which were traditionally associated with the aesthetic pleasure of the artwork.

The catalogue of this exhibition is the first monograph on this artist edited in Spain. As well as the exhibited works, the catalogue shows thorough graphic documentation of his creations and it includes some texts by Consuelo Císcar, Barbara Rose, Thierry Lenain and Thomas Mas Evilley.

Bernar Venet, (Saint-Auban 1941). Born within a working-class family. He moved to Nice when he was 17 years old, where he worked as a set designer in the Opera house, and he began his artistic career in an environment affected by the European post-war period, during which a redefinition of art was taking place. Within the different vanguard movements new groups emerged. One of them was the New Realism of Paris, also known as Neo-Dada, which was developed around Pierre Restany, with artists such as Yves Klein, Arman, Martial Raysse, Ben Vautier and César, who was the father of École de Nice (Nice School).

It was through Ben Vautier that Venet contacted the artists Fluxus George Maciunas, Robert Filliou and George Brecht. Vautier also introduced Venet to the vanguard artists of the Nice School, which challenged the Parisian abstract movement and aimed the desmitification of art and of the artist’s role. They developed a constructive approach, which proposed art as a socially useful activity.

From 1961 to 1963 his intellectual abstraction capacity and his interest in experimentation, orientated Venet into conceptual art. He approached those who used the austere confines of black and white, he exhibited fabrics and cartons covered in tar, it was then when he said "black is the reject of easy communication", His first works out of representation borders develop toward a phase in which the dense black substance was applied to folded carton pieces, which had been previously discarded.

It was also during this period when he started the creation of sculptures without a clearly-defined form. Tas de Charbon (Pile of Coal), in 1963 released Venet from the limitations he had faced at the beginning. Since then, conceptual art has always been part of the work of Bernar Venet, both in his wall paintings with equations or abstract elements and in his performances, such as Return, which reveals Venet’s interest in mathematical subjects.

In 1966 Bernar Venet travelled to New York for the first time, where he would settle down permanently soon after that. He studied the Conceptual and Postminimal art period, which was known by the dematerialization of the art object, and he studied the work of other minimalist artists, such as Donald Judd, Dan Flavin, Carl Andre y Sol LeWitt, who focused on industrial inexpressiveness and rejected the deep implications of a surface that is perceived and present. Venet decides to base his art on impersonal laws of physics and mathematics in order to release art from the design elements of formal compositions. As part of this decision he created Tubes in 1963, though that work focused in the connection between sculptoric and pictorial elements, by following the theories of the French semiologist Jacques Bertin.

From 1971 to 1976 he interrupted his artistic practice and went back to France, where he started writing and working as a professor of theory of art at La Sorbonne. After that he took up his creative activity again by working on fabric and on wood relieves, which eventually led him to start with his sculptoric work. In Sepetember 1976 he ended up a period of reflection and self-investigation and, bored by inactivity, Venet decided to take up artistic practice again and go back to New York. He designed some furniture in his new studio and he got it done in steel. This first experience with steel fabrication on a large scale set the starting point of his three-dimensional sculpture. These steel forms without geometrical ornaments may be considered as his firsts large scale sculptures. When he went back to New York, Venet became involved in the city’s artistic scene, where he took part in joint exhibitions at the art galleries of Leo Castelli and Paula Cooper, together with the most important American artists of Minimal and Conceptual art. He was also interested in other disciplines such as performance, photography, poetry, music, choreography and design of theatre plays.

In 1979 he started developing steel sculptures consisting of two bows and a series of wood relieves that would lead him to create his three-dimensional sculptures. Within the transition from wood to steel he incorporated a new element "indeterminated lines", which he defined as linear forms that deviate from regularity without following a preconceived plan by being shaped as a product of the interaction between the artist and his material.

Since 1983 he made COR-TEN steel sculptures by following the principle of "indeterminated lines" and he installed them in urban spaces and public collections from Nice, Paris, Berlin, Tokyo, Strasburg, Peking, Austin, San Francisco and Grenoble. Bernar Venet will set up exhibitions in Regia di Caserta (Naples) and in Versailles next year.

In 2001 he took up an old project again, which he had not been able to do yet: the self-portrait from a tomodensiometric check-up, a project that is dissociated from subjective perception. At the same time he picked up again a series of paintings from the sixties, which were based on mathematical formulas and equations. Soon after that he created his saturaciones (saturations) by superimposing a number of equations in a way that they became illegible. He has also used this technique in photographs, sound works and performances. His current sculptoric work, which is based on "indeterminated lines", underlines his tendency to untidiness, complexity and undetermination. Since 2007 his work has been exhibited in New York, Shanghai and Bordeaux.